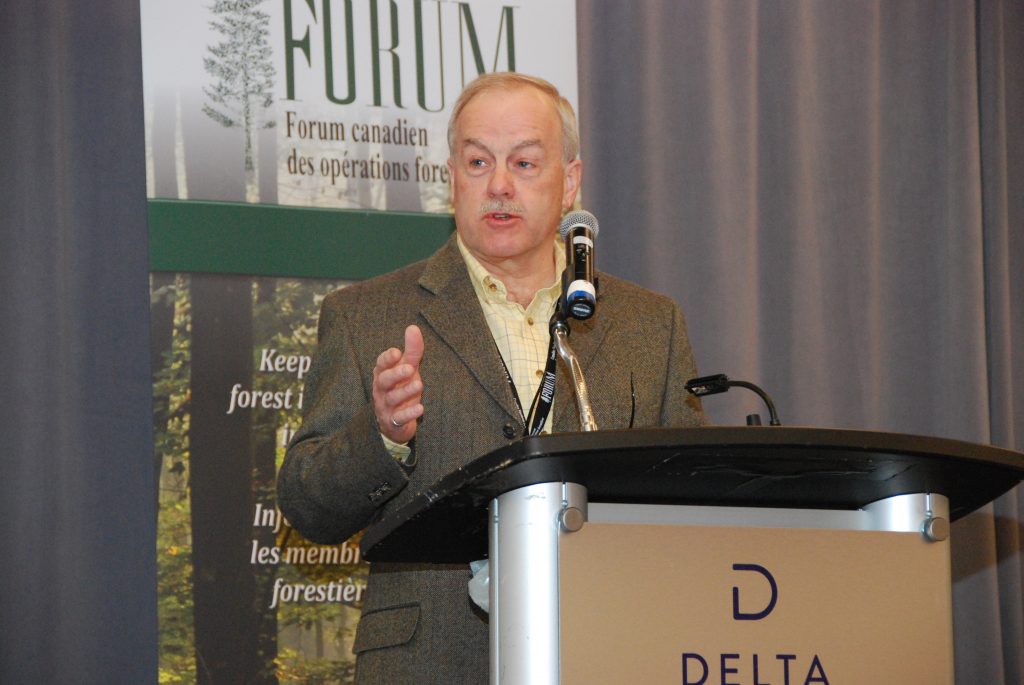 The organization marked its 100th anniversary this year, tracing its roots back to the 1919 conception of the Woodlands Section of the former Canadian Pulp and Paper Association, which is now the Forest Products Association of Canada. Over years of industry change and restructuring, the CWF organization has remained committed to sustainable forest management and efficient, profitable woodlands operations.

“The object of the former Woodlands Section still serves us well today. We have the privilege of carrying on that original mandate, yes, as a different organization, but still holding on to those roots of the Woodlands Section,” CWF executive director Peter Robichaud told CFI. “We are challenged with similar issues: labour issues, operations or environmental issues. Things are always changing with new technologies to work with and different people and governments, protocols and social licence, so we have to stay on top of those.”

While the focus of the Spring Meeting is woodlands operations in Atlantic Canada, Robichaud said he’s had interest from cross-country attendees to grow the national conversation on forest management.

“We’ve always maintained the cross section of folks that we have at our meetings. As opposed to separate industry events, people get to rub shoulders and network regardless of what aspect of the business they are in,” he said.

Today the forest industry in Atlantic Canada is facing a number of key issues to remain profitable, the most pressing of which is public awareness and education, Robichaud said.

“The whole aspect of social licence is important. We need to continuing doing a better job of telling our story so they understand the integration of the forest sector and the value chain. That’s one key element; there are also environmental challenges around climate change, and operational challenges with transportation, as well as recruitment and retention of the workforce,” he said.

This year’s Spring Meeting plenary sessions covered many of these issues, including workforce development to address labour shortages. (Article continues below gallery.)

David Campbell, president of Jupia Consultants, shared recent statistics on Atlantic Canada’s forest products sector markets and demographics. “This industry, just like the rest of the region, has a high share of the workforce heading to retirement,” he said. Unlike in western or central Canada, Atlantic Canada has attracted relatively few immigrants to backfill the looming labour shortage.

“We need to make young people understand that there is a very meaningful career for them in this industry. We need to focus on the careers, not just individual jobs,” Campbell said.

A panel on recruitment addressed some solutions to the workforce challenges, including First Nations’ participation in forestry, recruiting abroad, and women in trades.

J.D. Irving has taken the lead in Atlantic Canada when it comes to recruiting internationally. Jim Ketterling explained the company’s strategy and lessons learned. “It’s easy to bring people here, but harder to keep them. You need to make them feel at home,” he said.

Many immigrants are looking to bring their families, so companies need to consider all aspects of integration into a community, such as schools and places of worship, Ketterling said.

Helene Savoie-Louis, with the New Brunswick organization New Boots: Progressing Women in Trades, gave the audience a reality check when it comes to the female workforce. New Brunswick, she said, has the lowest percentage of women in trades, recently surpassed by Nunavut.

“I’m sorry to say, but these are the facts,” she said. “Why is this so low? There are stereotypes out there: women aren’t interested or women aren’t strong enough.”

In reality, women are not promoted in trades industries, Savoie-Louis said, and they rarely have connections to networks that would land them a job. New Boots is aiming to change that by working with forest companies to promote women in the industry.

The learning continued during the conference with concurrent sessions dedicated to logging operations, technical forest management, and trucking.

A highlight of the Spring Meeting is the annual announcement of the Outstanding Contractor of the Year. This year Darrin Carter Logging took home the big award (read CFI’s profile on them), while Noble’s Resources won a regional award for Newfoundland and Labrador and Les Enterprises DYMA won for New Brunswick.

“We’ve got a lot to be proud of,” Robichaud told the crowd during his address. “We look forward as an organization to the next 100 years.”