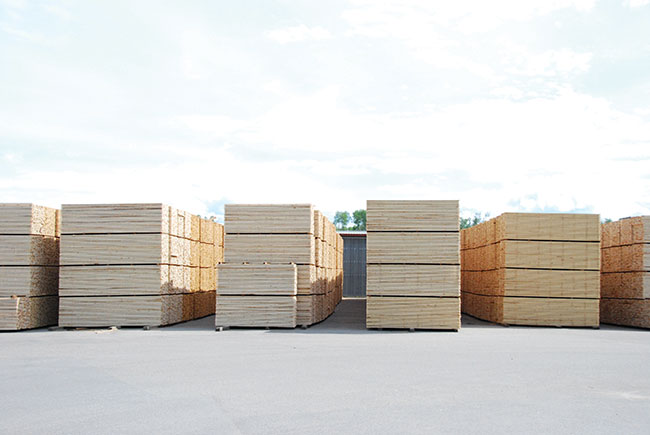 Editor’s note: For more on this topic, check out this episode of The CFI Podcast with Keta Kosman, owner of Madison’s Lumber Reporter.

If there was ever an incomprehensible year for forestry and sawmilling, it was 2020. Macroeconomic conditions in Canada and the U.S. weren’t any easier to decipher. However, one sector that clearly did well was housing: home building and selling activity across the continent revved up to white-hot levels. Indeed, according to the latest U.S. employment data, job gains in the construction sector entirely offset all the other job losses put together.

The pendulum of softwood lumber and panel prices swung widely, with drops caused largely by confusion around lockdowns and then by the institution of health measures – specifically social distancing – in workplaces to prevent the transmission of COVID-19.

Had it not been for these unfortunate circumstances, indications in early 2020 suggested a good year for U.S. housing starts, and thus for lumber sales. The U.S. Census – as well as the Canadian Census – data released in February of last year showed a very solid prognosis for home construction and building activity.

Sawmills and lumber resellers across the continent were poised for a year of high-volume sales with the attendant high prices. But when the pandemic hit North America in March, the momentum of lumber manufacturing and sales tumbled significantly, taking prices with it.

However, demand for lumber supply for building projects remained and became pent-up over late spring and early summer. The resulting sustained rush of lumber buying caught sawmills and wholesalers by surprise, which then pushed prices up to never-before-seen heights. See Figure 1 to see how prices in December 2020 for benchmark Western SPF KD 2×4 #2&BTr compare to prices in previous years.

In the summer of 2020, the extremely hot housing market caught a lot of people by surprise, as demand for homes rose sharply and supply consequently lowered.

As a result, home prices increased markedly. In the same way, the price of building materials – specifically lumber – rose as well. Expressions of shock rang throughout the value chain, as re-loads, stocking wholesalers, home builders, and resellers were caught with quite lean solid wood inventories.

Despite these unexpected circumstances, the higher prices were paid because contractors had construction projects ongoing and needed the lumber to complete them. Thus, the final end-user – the home buyer – paid the additional cost (approximately US$15,000) in the new home sales price.

As 2020 waned and sawmills across Canada and parts of the U.S. went into annual curtailments and seasonal breaks, there was not really a stop in business for lumber sellers and resellers. It is quite unprecedented for home sales and building to be so strong in November and December. This left more than a few operators caught short with not enough wood on hand to complete ongoing projects. Calls for orders to sawmills and wholesalers kept going on over the holiday weeks.

Indeed, this carried forward to the first week of January, with prices climbing every higher. “Where will it end?” players asked. They were desperate to know what the looming price floor would be and when that would occur. At the time, Madison’s Lumber Reporter suspected – which turned out to be true – that this pop in prices was the result of a lag in sales and deliveries left over from the holiday weeks.

By the time of writing in the second full work week of January, prices were flat and, in some cases, even down. Forest operators across the continent breathed a sigh of relief that sanity had returned to the softwood lumber market. See Figure 2 to see how benchmark softwood dimension lumber and panel prices in January 2021 compared to previous weeks.

Outlook for 2021
What does this mean for 2021? It’s hard to say, but we do know some important market conditions for the supply-demand balance.

December data for U.S. home sales and prices were even better than it had been in the summer, and U.S. builders were having a hard time finding workers and new lots for building projects. Many important materials like windows, roof trusses, etc., were also difficult to find.

Meanwhile, log supplies at sawmills across North America were plump to robust, but transportation was very difficult, especially on the rails. Large equipment suppliers for logging and trucking reported being booked out for 24 solid months.

Given all this, it’s likely that from the time of writing in mid-January through the end of 2021, prices of softwood lumber and panel commodities are not going to drop significantly. The momentum of ongoing strong demand for new building, as well as for remodelling, will result in continued large volumes of lumber sales until the end of the year, if not longer. See Figure 3 to compare prices for benchmark softwood dimensional lumber and panels in January 2021 to 2020 prices.

The importance of U.S. housing starts – especially single-family starts – to sawmills cannot be overstated: 65 per cent of Canadian softwood lumber sales go to the U.S., largely for new home building. Another 10 per cent is sold within Canada, and six per cent goes to Japan. Japan’s lumber purchases are entirely #1/Appearance Grade, or Premium wood – not the standard grade, or #2&Btr, used in North America.

New home building
There are some powerful fundamental drivers to North American softwood lumber demand, the most important of which is new home building.

At the time of writing, the full-year data for 2020 had been released. According to this data, in Canada, national home sales rose seven per cent month-over-month in December 2020. Actual (not seasonally adjusted) activity was up 47 per cent year-over-year, and the number of newly listed properties climbed 3.4 per cent from November to December. The MLS Home Price Index rose 1.5 per cent in December compared to November and was up 13 per cent in 2020 compared to 2019. The actual (not seasonally adjusted) national average sale price posted a 17 per cent gain in December compared to the previous year.

Meanwhile, in the U.S., the median home sale price increased 14 per cent in January 2021 compared to the previous year, to US$320,025. Pending home sales were up 35 per cent year-over-year, while active listings fell 33 per cent in January compared to the same month in 2020 to a new all-time low, indicating the supply of homes for sale is very tight. Of homes that went under contract, 38 per cent had an accepted offer within the first two weeks on the market, well above the 27 per cent rate during the same period one year ago. The average sale-to-list price ratio, which measures how close homes are selling to their asking prices, was 1.5 per cent higher than one year ago. Finally, for the week ending Jan. 10, 2021, the seasonally adjusted Redfin Homebuyer Demand Index was up 40 per cent from January and February 2020.

Overall, in 2021, U.S. National Association of Realtors chief economist Lawrence Yun predicts new home sales will jump 21 per cent and existing-home sales will climb nine per cent. He predicts home prices will rise by three per cent this year. See Figure 5 to compare current prices of benchmark softwood lumber to recent and historical highs, as well as recent lows.

Based on continued strong lumber sales, but mostly flat prices as of mid-January, it seems that the solid wood supply-demand balance is finding an even keel. In terms of the potential upside to lumber prices, look for issues with log supply. As long as sawmills have ample access to feedstock, there should not be any shocks with sudden, sharp lumber price increases.