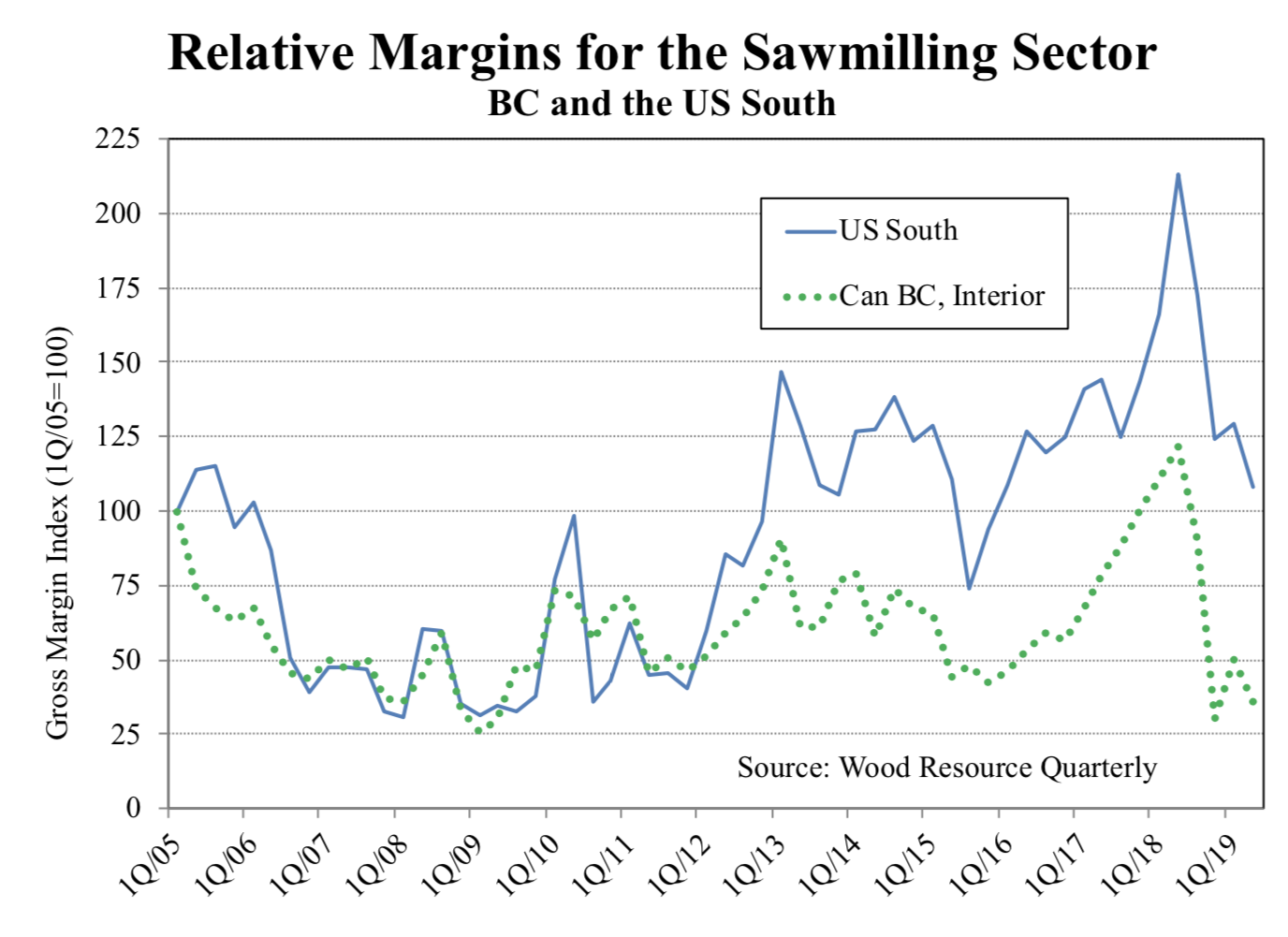 Lower lumber prices and only small adjustments in sawlog costs in the 2Q/19, sawmills in North America saw their profit margins decline again after a short-lived improvement in the 1Q/19. Although margins have fallen quite substantially in the U.S. South the past year, reaching a three-year low, they are still higher than the 15-year average as tracked by the WRQ.

Small changes in log costs together with lower income from lumber and residual sales have taken the gross margins for sawmills in British Columbia down to their lowest levels since the Global Financial Crisis back in 2009. In the 2Q/19, these margins are less than half of their ten-year average (see chart).

In the Nordic countries, sawmill profit margins (in U.S. dollar terms) have increased over the past two years as a result of lumber and residual prices growing more than sawlog costs. From the 2Q/17 to the 2Q/19, gross margins in Finland and Sweden were up four per cent and 11 per cent, respectively. Export prices for lumber in both Finland and Sweden have fallen from early 2018 to 2Q/19.

As a result of substantially lower costs for sawlogs in Austria, sawmills have seen improved profits during 2018 and 2019. Despite declines in lumber prices during the second half of 2018 and in early 2019, gross margins in the 2Q/19 were at their highest level since the 2Q/08.

Sawmills in Siberia continue to expand exports to China with fairly stable lumber export prices over the past three years. However, in the 4Q/18, lumber prices fell to their lowest level in almost two years and the decline continued during the first six months of 2019. This decline occurred at the same time that sawlog costs were moving slightly upward in early 2019, which resulted in reduced gross margins for many lumber producers in the region. Sawmill margins for the 2Q/19 were below their 15-year averages in U.S. dollar terms but above the average for the past 15 years in Ruble terms.

Sawmill gross margins are reported for key world markets each quarter in the 56-page publication, the Wood Resource Quarterly (WRQ). The report, which was established in 1988 and has subscribers in over 30 countries, tracks sawlog, pulpwood, lumber and pellet prices, trade and market developments in most key regions around the world. To subscribe to the WRQ, please go to www.WoodPrices.com.