Jan. 19, 2018 – Seventy five years ago the Truck Loggers Association (TLA) was discussing radically different logging equipment at their first annual convention, but their core message was the same as it is today: contractor sustainability. 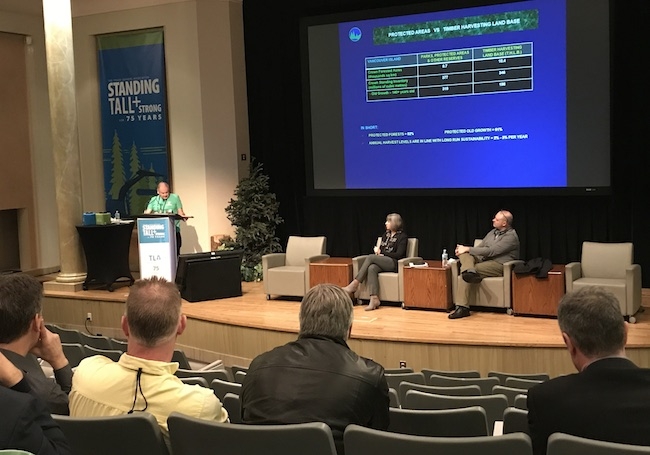 Dick Jones of Teal-Jones Group presents as part of a panel on managing the transition to second growth harvesting in Coastal B.C.

“This is the ethos of the association… support of forest management and opposition to corporate and state monopolies,” TLA executive director David Elstone said in an interview at the 2018 TLA convention in Victoria this week.

At last year’s convention the B.C. government announced a third-party contractor sustainability review for the province’s timber harvesting contractors. The results of the review are expected at the end of January.

“We’re in this wait-and-see mode. You talk to any contractor at the TLA and this is top of mind. It has potentially to be the biggest forest policy influencer since the early 2000s. The last time changes were made they didn’t work out so well for contractors,” Elstone said. “We’re hoping the report recognizes there is a problem, and it identifies the causes of the problems.”

B.C. Premier John Horgan’s address to TLA members during the convention seemed to confirm the TLA’s concerns. “Licensees appear to have more sway than they’ve ever had before, and less responsibility than they’ve ever had before,” Horgan said. “I appreciate that the major licensees may take issue with that statement. But it’s a certainty in many communities that the relationship between the tenure holder and community has been broken.”

While the review was top of mind, the convention’s panels and presentations discussed other solutions to keep afloat as a contractor on the West Coast, such as technology, hiring practices and innovation.

Next gen
Successfully employing the next generation of loggers is a pressing concern faced by contractors Canada-wide. A panel at the convention addressed the perennial question of who is going to do the work.

First Nations are becoming a bigger part of the picture, said Maxime Lepine with Homalco Forestry LP based in Campbell River, B.C. There are funding mechanisms in place – BC First Nations Forestry Council and the B.C. government – to encourage First Nations people to enter into a forestry career and begin working for established contracting companies, he said. Some First Nations are looking for partnerships to develop their own capacity to harvest on their traditional territory.

“Creating a good relationship is the best way to move forward for both sides,” Lepine said.

The BC Forest Safety Council is taking steps to ensure there is a competent workforce to replace the aging logger demographic. The industry is expecting a 40-60 per cent turnover in just 10 years, Russell Robertson told the audience.

“There is going to be an influx of young workers coming into the industry,” Robertson said. In order for companies to screen the right candidates, the council has developed competency standards for more than 30 forestry occupations, and will be adding more. The core competencies from those occupations were narrowed down into Fundamentals of Forestry – a 12-week program designed for post-secondary institutions.

“As an employer you’ll have a choice: you can hire someone whose last job was a barista at Starbucks, or you can hire someone who’s been through the Fundamentals of Forestry program and is aware of the hazards of the job and the means to control them,” Robertson said. The council is looking to partner with industry to begin field-testing the assessment tools.

Fibre supply
The age-old question of fibre supply on the coast is another crucial competent to sustainability. BC Chief Forester Diane Nicholls took part in a panel that discussed managing the transition from old growth to second growth.

Between 2010 and 2016, old growth represented about 50 per cent of the harvested land base, Nicholls said, but there is increasing public pressure to protect that old growth. Managing the transition will mean harvesting the entire profile of a timber harvesting land base, which includes fibre on steep slopes and high elevations, she said.

“We’ve harvested where it has been cheaper, easier and higher margins. We’ve created what we have in front of us now,” Nicholls said. “My mantra is sustainability and harvesting the profile. The biggest thing we can do is keep a balanced portfolio in our harvesting, and to track and monitor our behaviour.”

Justin Rigsby with Holbrook Dyson Logging based in Campbell River said they are harvesting about 80 per cent old growth and 20 per cent second growth. The second growth is on the lower, flatter ground and allows crews to work year round, but harvesting there requires new equipment. “We need the volume to justify the investment in second-growth equipment,” Rigsby said.

Harvesting fibre residuals that go into new wood-based products, including biofuels, bio-plastics and bio-fabrics, is a possible solution, Nicholls said. “We have the fibre but it needs to be more than saw logs,” she said.

Dick Jones, co-owner of Teal-Jones Group in Surrey, B.C., said there is a disconnect between mills and government that is preventing mills from paying for the residuals. “We need a balanced stumpage system so you are rewarded for taking the garbage wood out,” he said.

“The solution is right here in this room,” Eric Krume, owner of Krume Logging and Summit Equipment, told the audience during a panel on outsiders’ perspectives. Krume, based in Washington State, explained how his company has developed its own winch assist logging equipment to increase volume on step slopes in the Pacific Northwest. Testing new equipment is expensive, but it’s necessary to adapt and survive, he said.

The convention’s final panel, titled Blueprint for the next 75 years, echoed Krume’s words. Panellists stressed the importance of TLA’s advocacy measures to change the “broken” forest tenure system, but agreed contractor innovation and adaptation are central to survival.

Jonathan Lok with Strategic Natural Resource Consultants said it’s the human side of forestry that companies should focus on going forward. “We have the technology and we have the environmental science… it’s the social sciences we need to work on,” he said. Panellists agreed contractors should engage more with their communities and share their stories.

To mark its 75th anniversary, TLA released a book at the convention that details the history of the association from the perspective of its past directors. “It tells you who we are, what we think and why we think it, from the people who shaped us. Our messages are built through them,” Elstone said.