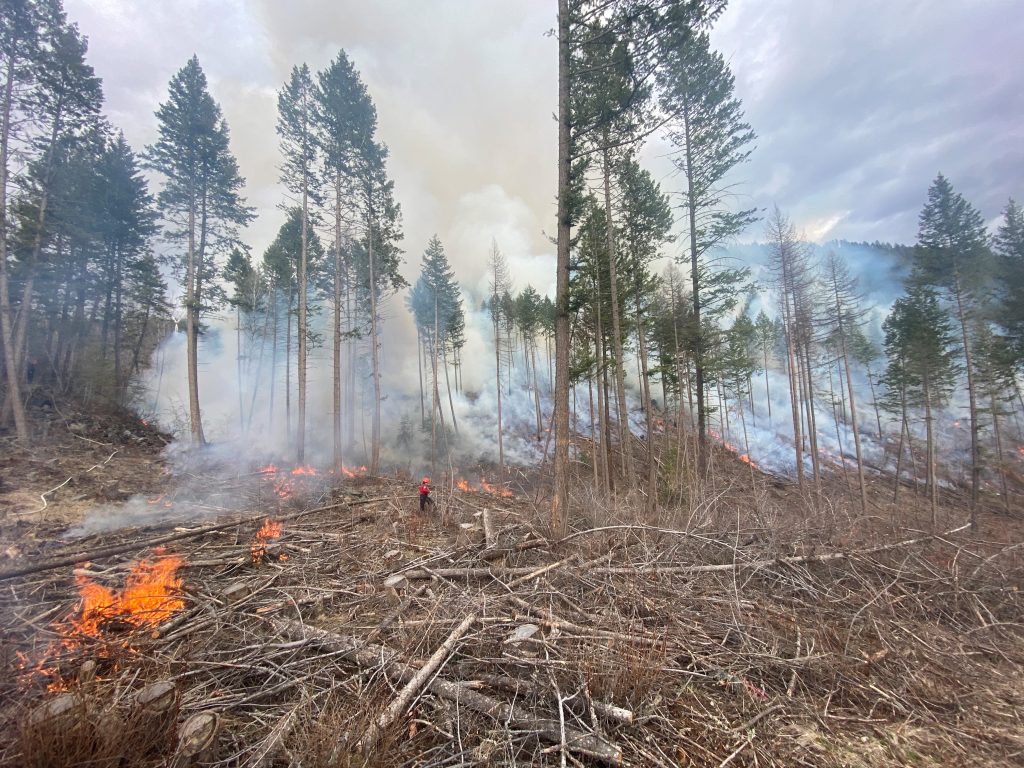 When the heat of summer hits, the focus of many people turns to the forests and the potential threat of wildfire to communities, important infrastructure, and transportation corridors. Taking proactive steps to mitigate the risk of wildfire can help better protect communities and bring a higher level of comfort to many, which is exactly what the Creston Community Forest (CCF) has done.

With a grant of $670,000 from the Forest Enhancement Society of BC (FESBC), the CCF was able to target an area on Arrow Mountain, three kilometres north of Creston,B.C., to reduce the risk of wildfire to the neighbouring communities of Creston and Wynndel. The project site at Arrow Mountain, also known to locals as Goat Mountain, is popular for hiking, off roading, and hunting, and accessed by a forest service road. 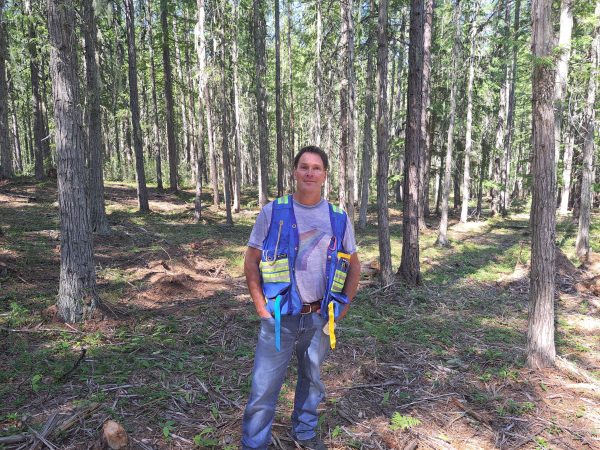 “We were very thoughtful in our planning and in the treatment of the area,” noted Daniel Gratton, forest manager of the CCF. “We opened the forested area up by taking out some of the unhealthy trees and we left a good number of trees behind. Then we had a crew come in and do the cleanup work of gathering up some of the small bushes and shrubs – called the understory – to be piled and burned.”

The project treated over 120 hectares on Arrow Mountain. Approximately 10,400 cubic metres was harvested from all seven blocks and mistletoe, infected larch, and unhealthy Douglas-fir were removed. The resulting state of the forest is now more like what would have existed when wildfires frequented the area prior to the introduction of the fire suppression programs in the early 1900s. 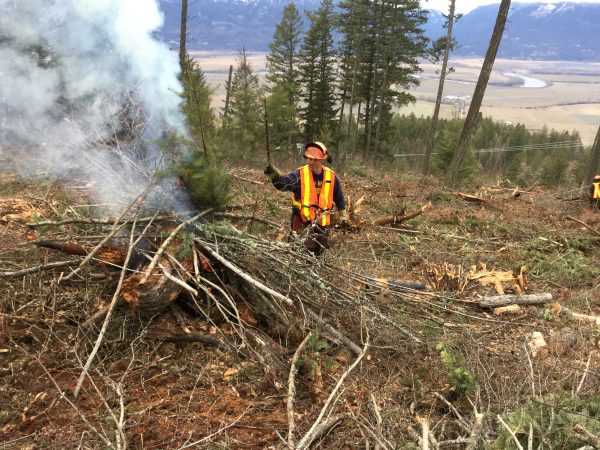 One of first areas treated.

“A lot of people don’t know it, but wildfires used to go through the Creston Valley and through the forests every 30 to 40 years,” said Gratton. “Many of the forests we see in our area today are not what they would have been 200 years ago because we’ve removed the occurrence of wildfires. What we are trying to do now is mimic what a wildfire would do; clean up the understory, take out some of the ladder fuels, and restore the ecology of the area.”

Since completion of this project, the community forest has now identified several other blocks that need this mitigation work.

“The Creston Community Forest has taken on a leadership role in their community, taking action, reducing the risk of wildfire to the community, and doing good forest management at the same time,” said Gord Pratt, RPF, FESBC Senior Manager. “They are finding the balance between forest management and wildfire risk reduction activities to meet the many needs of the public in the area.”

The project also saw outstanding economic benefits to the community extending beyond wildfire protection and created a steady source of income for many locals.

“The funding from FESBC helped provide employment to at least 15 locals who were involved in the development and planning phase, and the implementation to facilitate the piling, chipping, slashing, and burning,” said Gratton. 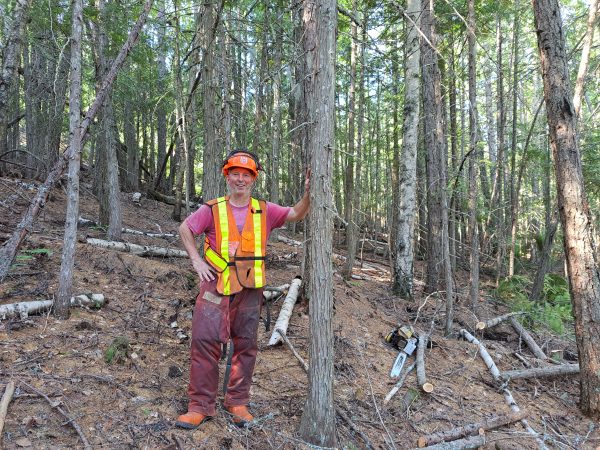 Jim Macaulay of Macaulay Forestry Ltd. has worked in the Creston area for 27 years and was thrilled with the opportunity the project brought to his company.

“It is very good working with local licensees to be able to complete this type of work. It’s beneficial to the surrounding community as we are trying to minimize the impact if we were to have a wildfire, so it won’t be so severe,” said Macaulay, adding, “We have nine employees on the payroll right now and the project supplied us with nine to 10 months of full-time employment.”

Macaulay’s crew was involved in completing the slashing, piling, and burning on the majority of the project site and they even assisted the BC Wildfire Service, the Creston Fire Department, and the community forest on two broadcast burns, which are controlled burns that take place under specific conditions.

“We all worked very well together,” said Macaulay. “The project got different parties working together and it was fantastic!” 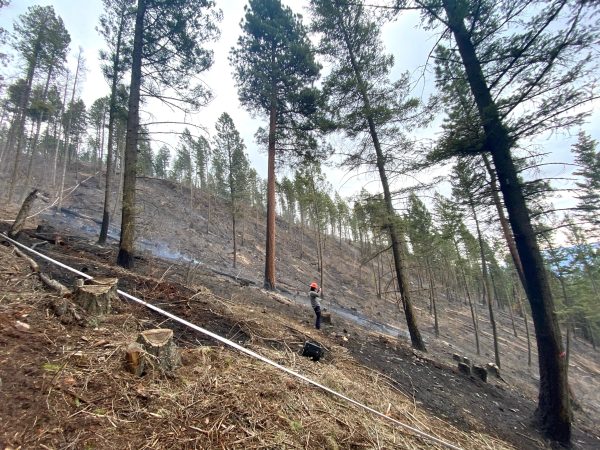 Another contractor working on the project was Lance Huscroft of Northspar Holdings Ltd, who also echoed the sentiments shared by Macaulay.

“It has been very enjoyable working so close to home on these projects with the community forest,” said Huscroft, who has been logging in the area for 28 years. “We’ve all appreciated being able to work so close to our homes to be close to our families, to get to town quickly for parts, and then back to the job site should something break-down. In the process, we supported local businesses for our service/parts needs and hired a local mechanic and trucking contractor. The majority of the timber was also shipped to the J.H. Huscroft sawmill in Creston.” 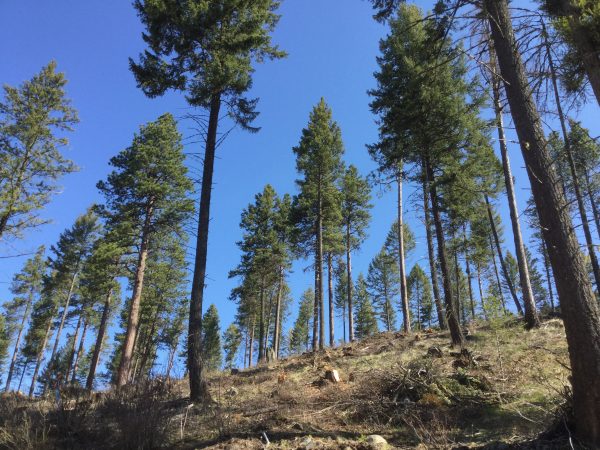 For Gratton, the success of this project is defined by the areas treated and the employment of locals.

“It was extremely important to have received funding from FESBC,” concluded Gratton. “We wouldn’t have done this amount of work and in such a short period of time without it. Quite honestly, it is something that was very important to us, but economically, I don’t think we would have been able to carry out this work in these areas, so we are grateful.”