Teamwork has allowed Jeannie, Francis and Benoit Carrier to grow their family forest transportation business, despite the recent forestry crisis. 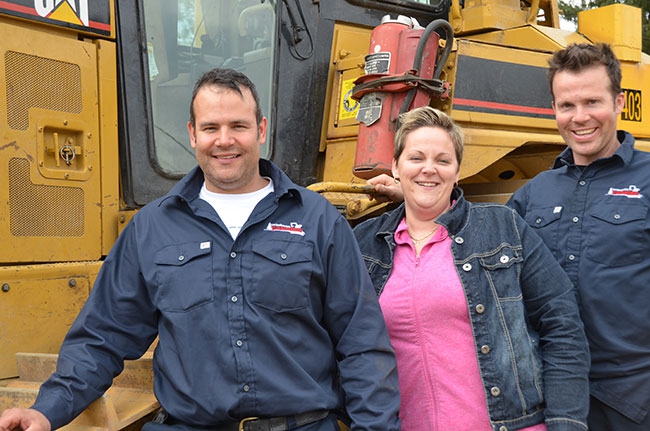 Surrounded by hundreds of kilometres of forests, the town of La Tuque, Que. is a hub of forest entrepreneurship. In this small town of 12,000, the name Carrier is considered a heavyweight in the industry.

More than 100 people attended the La Tuque Forestry Workshop this past May to hear from the three young entrepreneurs who took over their family’s business.

Francis is an industrial mechanics expert, while Benoit specializes in electromechanical and computerized systems, and Jeannie Carrier is the head of human resources and administration. Together they form, “Hell’s Trio,” as they like to be called. It was in 2012, that the trio decided to put their expertise together to bring Les Gestions NA Carrier to another level.

The siblings have the necessary skill sets required to manage operations within the forest industry – they are well trained, dynamic and listen to their employees. They are true foresters that like to speak their minds.

“We were brought up in an entrepreneurial spirit,” says Jeannie. “When we came back from school, we decided to take over the company.”

“I cannot imagine a future without the forest,” adds Francis. “I really believe in this industry.”

For Benoit, “the key [to success] is to work on a team with people who invest 100 per cent in the company.”

A forest legacy
In the 1990s, Nil-André Carrier helped his boys, Benoit and Francis, start their own business transporting timber and building resource roads. At the same time, Jeannie was working as an accountant for three different companies. When their father retired, the children decided to combine their skills and knowledge, and join forces.

The siblings’ company specialized in the maintenance and construction of resource roads for the forestry sector. However, the three entrepreneurs have had to diversify their operation to survive the most recent forestry crisis, which reduced their workload by about 25 per cent. They did so, by going into business with Hydro-Québec and the City of La Tuque.

“When the forest operations fell, we started working on public roads, which we did not do before,” explains Benoit.

“You have the choice to sit idly at home waiting for the phone to ring, or you take risks to develop new business,” adds Francis.

The company has also diversified its activities outside the region by winning contracts near Sept-Îles and Mont-Joli, regions hundreds of kilometres to the east of La Tuque. Forestry, however, remains the core of their activities. Every year, 50 employees from the company maintain nearly 100 kilometres of gravel roads and build 60 kilometres of new roads.

A healthy fleet
The company boasts a fleet of more than 50 machines for the construction, transport and winter maintenance of forestry roads.

Les Gestions NA Carrier has 18 10-wheel trucks, seven excavators, four tractors, three graders, a backhoe, five loaders, six articulated trucks, a flatbed truck, a truck loader and a fleet of some 20 pickup trucks in their arsenal. Although the company has Komatsu and John Deere equipment in its yard, 95 per cent of the equipment is from Caterpillar.

“They are experts in tractors and loaders,” says Francis. “Their sales volume of tractors and loaders means they offer the best expertise and service on parts. Every year, we try to buy at least one piece of new equipment and toss the old. Even during the crisis, we continued to invest in order to not fall behind.”

To further improve the company’s operational efficiencies in the forest, the company recently invested in a 324D FM Hewitt Caterpillar forestry machine. But because these units are not manufactured in large quantities, the company waited more than six months before they could get their hands on the diverse machine.

“It’s a real shovel designed for the forest and the first one in Quebec,” says Francis.

“This robust machine can be used as an excavator, feller, delimber, shredder or loader. In addition, the windows are Lexan, like harvesters, which improves driver visibility,” he said.

Finding new ways to be innovative and diversify the business has always been part of the entrepreneurial vision at Carrier; and that is fuelling the trio’s interest in harvesting in the biomass sector.

“We believe acquiring a brush-cutter mounted on a grader, a unique piece of equipment in Quebec, will enable us to open up new opportunities,” explains Francis.

They also keep a close eye on Quebec’s Office of Wood Marketing (BMMB), which was created to establish a free market for timber from Crown forests while encouraging innovation, efficiency and business competitiveness.

Boots on the ground
Francis, Jeannie and Benoit don’t just manage their operations from the comfort of their offices, they like be hands-on and work closely with their employees in the field.

“At camp, I’m up at 3 a.m. with 30 employees. I am interested in their work and they see that we want to work,” says Francis, who promotes mutual respect in the workplace.

A good employee does not always have to be the most knowledgeable member of your staff, but one that invests 100 per cent in the company and knows the meaning of teamwork, adds Benoit. “We are constantly looking to improve [the company] and accept criticisms,” he says.

The company has a gross annual revenue that ranges between $5 million and $10 million, and it employs upwards of 50 people in the winter, including mechanics, shovel operators, graders, foremen, machinists, secretaries and parts managers. That number drops as low as 35 in the summertime.

Much has changed since their father’s retirement. Nil-André Carrier was a contractor, not a manager.

“Initially, we did not have salary grids or employee manuals, for instance,” says Jeannie. “We put those tools in place to advance the business.”

Finding the next gen
When training new, younger workers it is important to be patient.

“The forest world is hard, explains Francis. “It interests fewer people than before.”

Because young people that are passionate about forestry can be hard to come by, it is vital that companies support and appreciate them, he adds. As for Francis, he’ll take waking up early and working the forests any day.

“I much prefer to see a beautiful sunrise over being stuck in traffic on [Highway] 20!” he says.

Family work balance
Jeannie, Benoit and Francis are 36, 37 and 38 years old, respectively, and they each have two children, between the ages of six and 10. “The three families live within 500 metres of the business and the kids are already demonstrating great entrepreneurial skills,” says Jeannie.

A new generation, ready to grow up with forestry fever.