New Gear Harvesting New Gear
A Fork in the Road

As in 2002 and 2007, there’s another round of emissions standards looming over the trucking industry in 2010. But unlike previous rounds of EPA crackdowns, this one will present two vastly different solutions. And the war of words between the two camps has already begun. 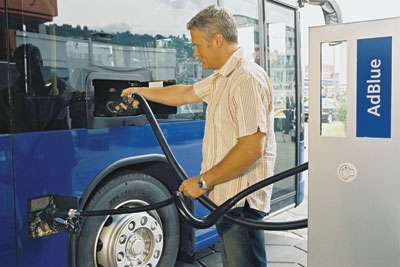 In one corner, you have International and Cummins, which have decided to meet the EPA2010 NOx requirements by expanding their current technology and increasing exhaust gas recirculation (EGR) levels.
They claim they can meet the stringent new standards without exhaust after-treatment.

And in the other corner, you have Daimler Trucks North America (makers of Freightliner, Detroit Diesel, Mercedes, Western Star and Sterling), Volvo Group (including Mack) and Paccar opting for the exhaust after-treatment system known as selective catalytic reduction (SCR), which is already widely used in Europe.

In a nutshell, the Cummins and International solution is the devil you know. It’s simply more of the same technology that was adopted in 2007, combined with refinements to air management, combustion and control systems. But it’s not without its challenges. Increased levels of EGR could present potential problems such as higher under-hood temperatures and possibly even further fuel economy degradation. 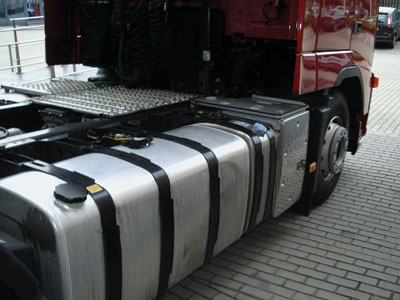 SCR involves the use of urea (also referred to as diesel exhaust fluid), which is introduced into the exhaust stream where a chemical reaction occurs, producing only harmless nitrogen and water. The system requires a heated urea tank as well as the associated hosing and plumbing. However, it is said to deliver fuel economy gains of 3 to 5%.

War of words
Both sides are adamant they have chosen the right solution for 2010, but customers will have a very difficult decision to make. The stakes are high – for engine manufacturers and truckers alike. International launched an attack against SCR in January, claiming the technology is “fraught with challenges.”

“We don’t like it,” International president Dee Kapur said of SCR. “There’s a whole bunch of reasons.”

He claimed there is no urea infrastructure in place and availability may be a concern. He also suggested urea does not perform well in hot or cold weather, that it’s toxic in nature, and that SCR actually increases CO2 emissions – the next pollutant expected to be targeted by the EPA.

Daimler swung back at this spring’s Mid-America Trucking Show, claiming their rival has taken “misinformation campaigns and scare tactics…to a fine art.

“We saw it in Europe before SCR was launched there, and we are seeing exactly the same thing here now,” said Michael Delaney, senior vice-president of marketing with DTNA. During a speech dubbed ‘The Certainty of SCR,’ Delaney refuted International’s claims, insisting the company chose SCR because it “works for everyone.” He said urea “is not harmful to the environment and poses no real hazards when used properly.”

As for availability, undoubtedly a major concern for loggers who often operate in remote areas, he pointed out that in Europe, points of supply for urea have increased from 200 retail pumps in January 2006, to more than 1,600 retail pumps two years later. He said there’ll be 1,700 points of supply in North America when SCR is rolled out here, adding that “With a range of 5,000 to 6,000 miles (between fill-ups)…one would have to work pretty hard to run out of DEF.”

It’s also likely small containers of DEF (think windshield washer-type jugs) will be available, so truckers in remote regions could carry a small supply with them if necessary.

As for its cold weather performance, DTNA admits urea has a freeze-point of 12 F (-11 C). However Christoph Hofmann, director of product strategy with Freightliner, told me cold weather testing in Canada has proven this is not a concern. While the urea does freeze in cold weather, a heating element in the tank thaws the fluid very quickly when the engine is started. By the time the truck is ready to be driven, Hofmann said the DEF will be liquefied.

“The trucks are running with no issues today in Finland, and even in the Arctic Circle,” added Delaney.

For its part, Cummins – an increasingly major player in the trucking industry – has mostly watched the debate from the sidelines.

Jim Kelly, vice-president of Cummins, told reporters at the Mid-America Trucking Show that his company is “not going to be part of that debate.” While it has chosen to meet EPA2010 requirements on its heavy-duty engines without the use of SCR, the company will use the technology on its medium-duty engine lineup, which typically sees the trucks return home nightly, alleviating concerns about urea availability.
Caterpillar has yet to announce its intentions for 2010, although it has cautioned against SCR in the past.

The bottom line for log haulers is that they have an important decision to make in 2010 and beyond. Chances are, both technologies will deliver the promised result and meet EPA requirements. The key will be to choose the technology that best suits your own individual requirements. Price, fuel mileage, complexity, maintenance requirements and other factors will all be important considerations. It’s never too early to begin preparing for this decision by initiating discussions with dealers, and arming yourself with as much information as possible.