Not many people get to be called an industry veteran before they turn 30, but 27-year-old Mitch Thibault has already earned that distinction. The owner of MGT Contracting Ltd. in Kamloops, B.C. will celebrate 10 years working in the forests throughout the province this October, and is now emerging from his father’s operation to grow his own logging business. 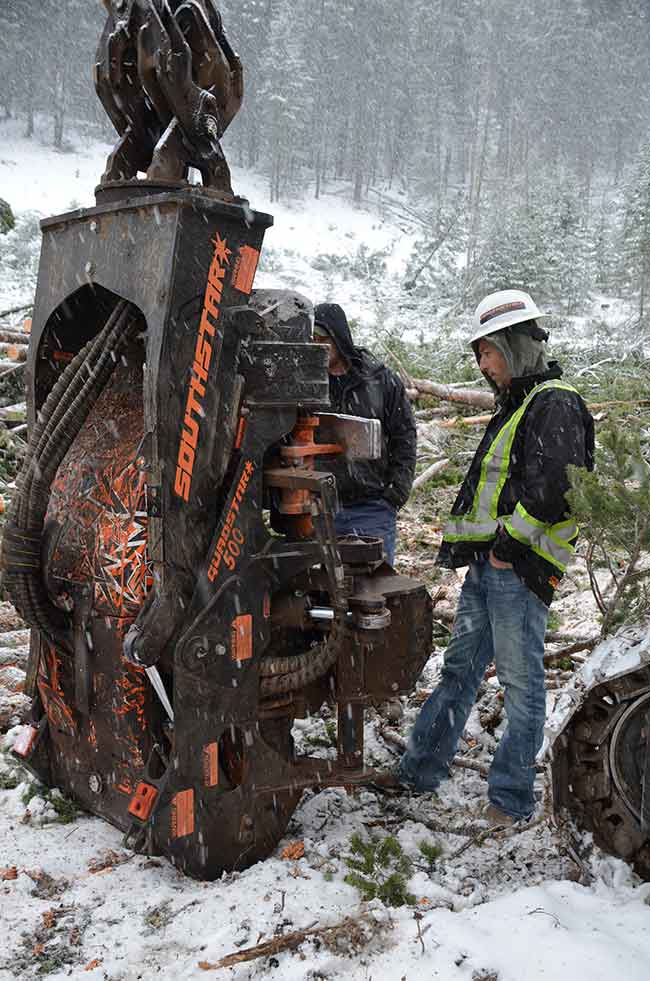 MGT’s Ethan Parker (left) and Southstar’s Mike Klopp (right) inspect the Quadstar 500 to assess needed maintenance for the processor. Not many people get to be called an industry veteran before they turn 30

Thibault has run MGT for close to three years now, working with a crew of three running two processors in the woods of the B.C. Interior. He works as a subcontractor for Terra Timber, a Kamloops-based contractor with its stems heading to the West Fraser’s Chasm mill in 70 Mile House, approximately 150 kilometres northwest of their home base.

“We’re originally from Prince George,” Thibault explains during Canadian Forest Industries tour of his operations. “When we came down here, we bought one contractor out (Kash Contracting), along with Mac Lind’s quota from West Fraser. We put the two contracts together, and now we are the largest evergreen contract holder for West Fraser’s 100 Mile House operations.”

Part of the reason why he and the team struggled in 2015 was the distance travelled to the jobsite. His crew was travelling upwards of two hours each way to the stand, which took its toll on the team. On top of that, much of the wood was startup wood so, in Thibault’s words, “we took what we could get.”

Typically, MGT cuts stands with a mix of fir, pine, spruce and balsam. His stands sit within a triangle that reaches from Cash Creek to Clinton to 100 Mile House, northwest of Kamloops.

The right tools
When Thibault broke out on his own, his first machine was a Cat carrier with a Waratah head. Working with his dad for years before, Cat and Waratah were the brands he knew and the machines he had run. So it only made sense to start there.

Both Thibault and his father had run Waratahs for as long as Mitch has been in the logging business. The two machines that his father currently runs both have Waratah 622C processors on them, while Thibault’s second processor has a 2011 622B on it.

But when Thibault went to purchase his next machine, he decided to look around more to gain a better appreciation of just what was available on the market.

Despite having years of good experience running Waratah heads, Thibault decided to take a chance to go a different direction. He looked into what Southstar had to offer. After consulting with the company, he settled on a Quadstar 500.

And so far, he has been happy with the decision he made.

“All of the guys at Southstar are really awesome,” Thibault says. “When I bought the machine, Mike [Klopp] came into the bush to program the machine. And when I had an issue, Mike Sampietro put his coveralls on and he came and helped us with the issue.”

While seeing technicians out in the forest is nothing new for logging contractors, having them go over and above with their level of customer service is always appreciated.

One recent interaction with Sampietro made a lasting impression on Thibault.

The experience in the forest hasn’t been the only thing that has impressed Thibault. Understanding that he was buying a machine that he had little familiarity with, but appreciated the design of, the processor has performed well for him in the over two years that he has been running the head.

“It’s really been hassle-free,” Thibault says. “I have 5,500 hours on the head and have had minimal problems. I think I have worn out two hoses and that is about it.”

It’s that same durability that is the reasoning behind his choice of carrier. For his entire nine-and-a-half years in the business, Thibault has always relied on Cat machines, noting that its fuel efficiency and longevity are two key reasons why he has not actively searched out a replacement.

Challenging conditions
With machine durability and efficiency far from a concern, Thibault can focus on the issues currently facing his operation.

“Right now, the stand we are cutting in is on top of a mountain,” Thibault says. “The terrain is very rocky, and the size of the wood has us running seven sorts.”

Tree size has been an issue both this year and last, as the high value timber hasn’t always been what’s available in the stands he has been cutting. All the more reason why a multi-stem processor has been key to keeping the operation efficient, making short work on any pulp wood encountered in the stands.

His other major challenge is replacing a strong worker and close friend.

Parker, who was running the Quadstar when Canadian Forest Industries went out into the woods with MGT, has been hired on by Southstar to work at its headquarters in Kamloops.

Thibault notes that while there are many operators in the Kamloops area, replacing Parker will be very difficult for his operation.

“He’s a good friend. It really sucks to lose him. He shines above other operators with decades more experience. It will be extremely hard to find a processor operator that can keep up with the pace that we’ve established.”

While he looks for a replacement for Parker, Thibault continues to work to expand his business. Thibault’s next step is to grab half of his father’s processing capacity from him at some point in 2017.

There is no doubt that, even if that doesn’t become a reality, this young industry veteran will continue to find a way to make his mark in the woods of the B.C. Interior.