Now in its second year, the Canadian Truck King Challenge is a non-partisan pickup truck testing event that is arranged and judged by Canadian automotive journalists from across the country. This year we had judges from as far as Alberta and Quebec, as well as our first civilian judges. Collectively, they spent over 200 hours testing these trucks as well as driving over 4,400 km in the next three days – The same as driving from Toronto to Vancouver. 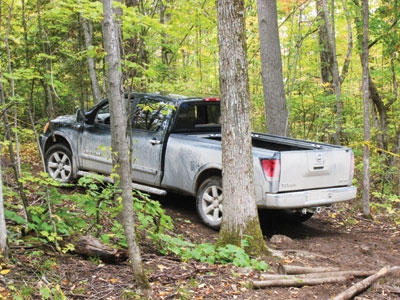 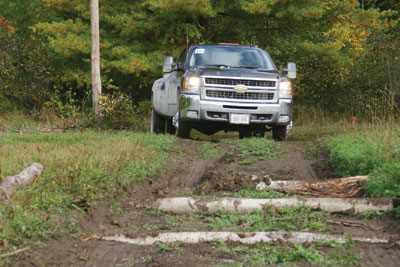 Why do we do it? Because we share in a pickup truck culture; one that appreciates the work ethic and admires ability. This requires that trucks be tested differently than cars, and until this event came along, that just wasn’t being done. It’s also become obvious that this information is particularly valued in businesses that depend on fleets of pickup trucks – and few are as tough on them as the primary industries in Canada. Forestry, Farming, Mining, Oil and Aggregates use a lot of trucks, and for them the kind of testing we do is more to the point than deciding which interior to buy. We try to replicate the needs of truck buyers by towing, loading and running them off-road. We even spend time going through every flip n’ fold option to discover just where you can put a laptop and a pair of muddy boots.

New Players
Every year brings a different field of trucks to our test site in the Kawarthas, but this year saw the launch of the all-new Toyota Tundra, arguably the first full-size pickup Toyota has built, and an across the board revamp of the whole GM pickup fleet. This would be the first time the new GMT900 trucks would be tested head to head, and with a new Tundra elbowing in for market share.And it would turn out to be a fight. Also in the running would be the Super Duty Fords (including an F450) and Dodge, though getting long in the tooth, still fielded five trucks covering the midsize through the one-ton category. Nissan (which probably had the least to offer – as far as “new” goes) also competed in the hotly contested 1/2-ton segment. Twenty-three trucks in all were entered. 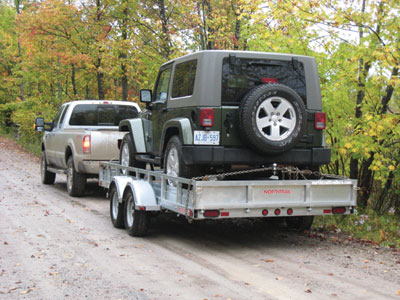 Missing was Honda, whose Ridgeline competed last year, without winning its class, but the company did not respond to this year’s invitation to attend. Also absent for the second year was Mazda. We think that’s a shame, because the B-series trucks, which remain popular as one of the last compact pickups still in this market, would make a good addition to the under V6 midsize category. Mazda apparently does not agree.

The first day of the Challenge was taken up with eight judges driving each of the 23 entries empty on the 15-km unburdened loop. This drive consists of gravel road, poorly maintained
asphalt county road, and finally a two-lane secondary highway. Where possible, groups of judges took the corresponding trucks in each category out – so as to drive them back-to-back in this first evaluation.  Even now, looking at my simple description, it seems unbelievable that it took us close to 10 hours each that first day to get through those loops.

With the rain still pelting us intermittently as Wednesday dawned, we decided to stay off the 4×4 course till the last possible hour, as the mud would cause problems for all the trucks. Instead we went to work on the payload and towing exercises. This year we happened to have a new 2008 Jeep Wrangler on hand which we loaded onto the twin-axle North Trail trailer that served as our tow test for the HD class of trucks. The tare weight on this 18-foot trailer is 2,000 lb and the Jeep weighed in at almost 5,00 lb for a total of 7,00 lb. A decent load.

The chief rivalry this year turned out to be between GM and Toyota. Both these manufacturers brought six trucks to compete, and each had all new iron to offer.  And despite the final results, with the Tundra on top, it was interesting to note that when the points were tallied (just those cast by the judges), the Silverado held a slim point and a half lead over the Tundra. Where the Tundra ended up closing the gap was on price. The winning model Toyota entered was priced at around $42,000 vs. $49,000 for the Silverado. To even out price differences in each class, a sliding scale is used to award or deduct points based on an average price in each segment. This sliding scale is also used to award/deduct points in the Fuel, Acceleration and Braking categories. In the case of the Silverado, that $7,000 price difference is what made the difference and gave the win to Toyota. It’s here, in the choice of how to equip or outfit a truck, that manufacturers can act strategically. They alone decide what version of a pickup to enter – and no one (including us) knows till just before the event what exactly is coming.

In fact, this year if the Tundra and Silverado were closer in price, say within a thousand dollars of each other, it’s likely that the GM would have come out on top. For this reason, it’s important to look at the scoring spreadsheets to see how the scoring was compiled for each entry. Also, even among trucks which failed to win their category – you may note a very strong point score in one area. This often reflects the judges’ feelings about a particular innovation, like the tailgate-mounted step on the Ford Super Duty or the new engine-brake on the Dodge Cummins diesel.

Toyota, GM Share Glory
In the end, Toyota took the overall winner with the Tundra, as well as winning with the Tacoma in the mid-size category for under V6 and over V6 entries. Still Toyota had to share the glory with GM, who took the coveted Work Truck category, and swept the 3/4 and One-Ton fields neither one of which Toyota had an entry for – but Ford and Dodge are stiff competition in these fast-growing markets.

Looking at the scores, it’s easy to see that the judges were impressed with the new styling, excellent interiors and the strong combination of the new Duramax diesel and Allison transmissions. None of these contests could be called close; they pretty much walked away with these titles.

The third morning it finally began to dry up – just in time to start towing. One of the highlights this year was the 28-foot Wildcat fifth wheel recreational trailer that we had on site. While towing this trailer was not going to be part of the competition this year, it did give judges another experience with three of the trucks outfitted with fifth wheel hitches. In fact this worked out so well that it may become part of the testing criteria in future years. 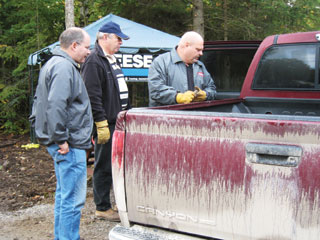 The bulk of the off-road and static testing took place on the last day. The first because it had finally stopped raining, and the last because after becoming familiar with the entries the previous two days it was time to start looking at more than their driving and towing characteristics. Static testing is really a review of how well the engineers have anticipated the needs of truck buyers – how easily do the back seats fold; is there a flat floor; is it washable; are there any compartments; do they lock; how do the doors open; how wide; etc. Then we move to the back and try the tailgate, the tie-downs, the hitch, the lighting, the liners and coatings. We then load tools, ATVs, ladders and a raft of other items just to see how they fit and how well the manufacturer has designed the box. All-important, but rarely tested features.

Ford, Dodge and Nissan failed to mount the podium this year, but each brought new and interesting features to the competition and they should be recognized for their contributions and also for the fact that unlike a few others, they dressed for the game and gave it their all.

Howard Elmer is a truck and SUV writer based in rural Ontario, and wrote this article for CFI Magazine. For more information and the score sheets, please see our website at www.canadiantruckkingchallenge.ca.