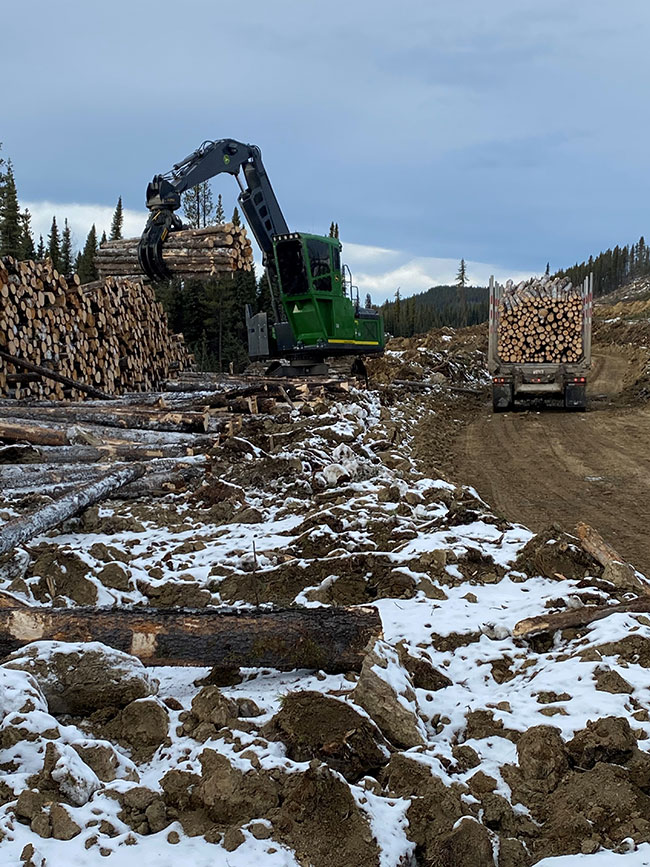 According to the results of CFI’s 2020 Contractor Survey, 43 per cent of Canadian logging contractors reported making a profit margin of three per cent or less in the past year, and 25 per cent claimed to have made no profit (defined as return on revenue as a percentage). It’s clear that loggers across the country are grappling with increasingly tight profit margins, even as more contractors and operators reach retirement age and exit the industry.

For Seth Dickinson, owner of Dickinson Logging Ltd. in Hinton, Alta., the solution to these problems is obvious: invest in technology that will help increase his productivity.

Dickinson, who was raised in New Brunswick, got his start logging with his father. In 2002, he moved out to Hinton, where he worked for different companies until he decided to start his own company in 2009, buying a Cat 322 processor and a used John Deere 748 skidder.

This puts the average hauling distance for the company at 70-90 kilometres one-way, although Dickinson and his crew also harvest some aspen, which is cut to eight-foot lengths and hauled to Weyerhaeuser in Edson, Alta.

In order to harvest all of this fibre, Dickinson employs 34 operators and hires 14 or 15 subcontractors. In the summer, they work a double shift five days a week; in the winter, that goes up to six days per week.

The company also does road building, constructing 30-40 kilometres of cutblock road per year. For this side of his business, Dickinson’s employees work a single shift, Monday to Friday.

Iron fleet
The majority of Dickinson’s harvesting fleet is John Deere, including a 903M buncher, a 948L skidder, 748G3 skidder, and one 2154 processor, all of which have Waratah heads on them.

To haul the fibre out to the mills, Dickinson has eight of his own trucks – three Kenworth W900s, three Kenworth T800s, one Kenworth C500, and one “black sheep,” a 367 Peterbilt. He also hires another 11 trucks.

“In general, John Deere has been pretty good,” he says when asked about his experience with the equipment manufacturer. “They always have a lot of parts and they have a resident mechanic who lives in town here, and there’s another one in the neighbouring town. I’ve had pretty good luck with them so far. And the equipment seems pretty decent on fuel.”

Outside of the John Deere roster, Dickinson has a Link-Belt 3240 loader with a live heel for decking and two 855 processors from Tigercat.

But, Dickinson actually downsized his fleet recently. Two years ago, he was logging for Weyerhaeuser in Grande Prairie. When he came back at the end of 2019, he sold off 26 pieces of equipment, most of which was parked, he explains.

As a result, he had to hire some equipment this past winter to help meet their production targets.

“But, I think for next year I’m going to buy some more equipment and just do it myself,” he says. “It seems easier to me – you have a lot better control over how it goes and when it goes.”

He plans to invest in a new loader, buncher, skidder, processor, and another truck. Dickinson also wants to buy a dump truck for his road building operations.

“It would come in pretty handy because a lot of the ground we build on, it’s not rock, it’s mostly clay. So, sometimes it’s kind of tricky to find a good dirt road to build in the summer,” he explains.

‘Slick’ technology
Dickinson has not just invested in machinery – he’s also invested in technology, such as John Deere TimberMatic Maps and TimberManager, to help boost his productivity and efficiency.

With TimberMatic Maps, he can build cutblock maps in his office and send them out to his operators, who can view the maps in their machines.

“We’re not allowed to let those guys work without a paper block map in the machine. So, when we’re operating 24 hours a day, it’s kind of hard to get to everybody because we’re usually running two or three sites at once,” he says. “But, with this system, they can just look at the screen, pick a block number and then bring the block map right up on the screen. I’ve found that works really well for them.”

The maps can also be updated in real-time, which helps keep operators within the cutblock boundaries and avoid environmentally sensitive areas.

“I usually try to walk ahead of the bunchers and see if there’s something like a spring or a creek, because sometimes the maps miss these things. So, if I come across something like that, I can update that live on my iPad, and it will automatically update any machines that are connected to that system,” he explains.

“You can put buffers on TimberMatic Maps, you can put an alarm on it,” he continues. “It’s really slick. John Deere is doing some really cool stuff with it, so by the time it’s done, it’s going to be a really good system.”

With this technology, operators can also contact Dickinson if they have trouble in the middle of the night or if he’s on a different jobsite. He can bring up the map on his laptop and iPad to monitor their position and give advice.

These solutions have saved Dickinson a lot of time and energy because he no longer has to examine every machine every day when he’s doing his rounds in the morning. Instead, he can check his computer to see if an operator is almost done with his or her current job, and then check their machines.

Every move counts
Technology like this helps Dickinson overcome a number of challenges facing the logging industry, particularly increasing costs and a lack of available manpower.

“The margins are so tight now, and everything is getting so expensive with the machines, wages and fuel. So, you really have to watch what you’re doing. Every move has to count nowadays,” he explains.

That includes hiring and training new operators. A lot of the older, more experienced operators are retiring, and there are fewer young people available to take their place. In Dickinson’s experience, those young people don’t have a very good work ethic.

On top of that, training new operators is an expensive endeavor, and “if you put all that time and effort in to train someone and they don’t stay, it burns you,” he says.

“That’s why the more they come up with technology-wise, the better. It’s going to be a big help. Anything we can do to make it easier to get out there, get people started faster – even supervisors – it’s going to be a huge help.”

“If you consider technology and how to really make it work for you, I think it’ll set you above the rest,” he adds. “It will give you a bit of an edge, which is what we need more than ever, because the profit margins are just so tight.”