June 16, 2013 - It hasn’t been easy for James Tompkins and the Highland Pulp crew. Nova Scotia’s forest industry has been challenged by disease, declining markets and tough government regulations. But the team at the Truro-based pulp wood provider just celebrated 50 years in business, and was awarded the Atlantic Contractor of the Year award in the same year.

Founded in 1962 by James’ dad in Cape Breton, Highland Pulp began cutting wood to feed Nova Scotia Pulp in Point Tupper, located south of Port Hawkesbury near the bridge to mainland Nova Scotia. In 1983, James’ dad passed away, leaving James, along with brothers Robert and Kevin, to take over the operation. Prior to 1983, the budworm had hit the highlands pretty hard, and the company considered relocating in order to find better opportunities. After nearly 30 years in Cape Breton, the company relocated its operation to Truro in 1989 and began cutting wood for area sawmills using a couple of Valmet 901 harvesters and a couple of Valmet forwarders.

In 2007, when Newpage purchased the former Nova Scotia Pulp site, then owned by Stora Forest Industries, Highland Pulp went back to cutting pulpwood to supply the mill. Unfortunately, Newpage was unsuccessful at the Point Tupper site, filing for bankruptcy in September of 2011. That caused Highland to once again search for new opportunities.

“When Newpage went into receivership we worked for Bowater,” said Tompkins. “We worked for them for a few years. Now we’re back with Port Hawkesbury Paper now that Resolute is gone.”

During the lean period between 2006 and 2008, when many companies in Atlantic Canada either downsized or shut down due to slumping lumber demands, Highland was still able to find work.

“We were lucky enough to have work year-round through most of those years even though things were tough,” said Tompkins. “We were able to move back and forth with Resolute and with Newpage, and we cut some biomass in that time as well.”

Managing equipment
Another big reason Highland was able to survive the recent downturn was its ability to manage equipment costs.
“We were lucky that we had a lot of machinery that was already paid down, so our debt was low,” said Tompkins.

Highland did shed one asset during the slow period though. In 2007, the company sold its log trucks, now hiring independent owner/operators to haul the work from their plots. That sale freed up some much-needed capital, and helped free up more maintenance time for the operation’s other machinery.

Now that it is out of the downturn, the company has once again started looking at machinery for its operation. In the past two to three years, the company has purchased a couple of machines, but rather than invest in new machines, management have looked to the quality machines available on the used market. That includes buying from contractors that are shutting down operations or upgrading to newer technologies, as well as keeping an eye on what’s available in Ritchie Bros. auctions.

“There has been a draw on machine operators going west to places like Fort McMurray,” said Tompkins. “There are some guys that are at a stage in their career that if they lose an operator, rather than train someone else from scratch, they’ll downsize.”

The more recent purchases include a Cat TK711 harvester with a Logmax head, which Tompkins bought from a contractor who was downsizing his operation. Tompkins already had a TK711 in his fleet, so he was familiar with how to maintain the new machine. Tompkins’ crew have five harvesters: the two TK711s, a Tigercat 845, a Tigercat 845 that he bought three years ago at auction, and a Ponsse Ergo. Tompkins runs the two Tigercats and the two Cats for two shifts per day, and the Ponsse for just one shift per day.

Tompkins has also had good luck purchasing forwarders from the used market. When a Tigercat 1014 became available at auction, he looked at the possibility of picking it up to provide parts for the two other 1014s Highland already had in its stable of equipment. It turned out that he was able to clean up the machine and start using it, providing even better value for his purchase. His fourth forwarder is an EcoLog, which he purchased when Rocan Forestry went into receivership.

Making its cut
In 2013, Tompkins is hoping that his equipment will allow him to meet his own expectations of 100,000 m3 cut. That number is higher than what Highland has cut in the past few years, but Tompkins hopes that some additional private wood sources will allow him to reach that goal.

“We used to buy a lot of private wood at one point, up to about 40 per cent seven or eight years ago,” explained Tompkins. “And then we went to a point where we didn’t buy any private wood. Working with Port Hawkesbury Paper now, they would like us to find 20 per cent.”

Finding wood to cut has often been the challenge for Highland. In 2012, the company worked anywhere from Cape Breton (the closest point is 170 kilometres east-northeast of Truro) to Digby, which is close to 300 kilometres southwest of Truro. Those distances add significant costs to the operation. Company policy is that anything within a 90-minute driving distance of Truro is same-day travel, but anything outside of that requires accommodations. That also means reducing the amount of cutting done in a week, as Tompkins runs four day shifts and four night shifts while on the road in order to save the cost of housing that comes with a fifth day shift.

The wood cut by Highland is primarily softwood based on the needs of its agreement with Port Hawkesbury Paper. Any hardwood that is cut becomes a byproduct, often sold to firewood suppliers in the area. The wood is all CTL off the stump using harvesters but no bunchers. They also cut some shelter woods, a practice that could become common for Highland.

Securing the next generation
The Tompkins brothers are already hard at work trying to secure and train the next generation of their crew in Truro. Two of James’ sons are working for Highland, one as a technician and the other as a heavy equipment mechanic apprentice.
The age of James’ children has also helped them land other forestry students and graduates, ones who are interested in staying in the area.

“If you can find work most of the year and keep them all busy even when times are tough, I think that helps keep the guys here.”

Still, the appeal of Western Canada can be quite strong. It’s an opportunity for young people on the east coast to get away from home, explore a new part of the country, and of course, make good money in the process.

“There’s a wage difference between the east coast and the west coast and I think that’s the draw to the west.”

But with the strength of Highland’s business, and the fact that they were able to survive through the downturn just a few years ago, they have become an appealing destination for young forestry workers in the area.

A thriving new generation of workers isn’t the only reason for optimism at Highland. The announcement earlier this year that Nova Scotia Power will be burning wood instead of coal at its Port Hawkesbury power station could provide some stability for the market.

“If a large portion of the supply contract goes to Port Hawkesbury Paper, it could help stabilize our business.” 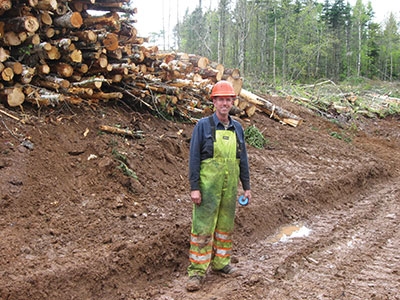 Along with brothers James and Kevin It hasn’t been easy for James Tompkins and the Highland Pulp crew. Nova Scotia’s forest industry has been challenged by disease and declining markets.
Print this page