Features Q & A Women in Forestry
A love for forests: Q&A with silviculture forester Jeanne Besaw 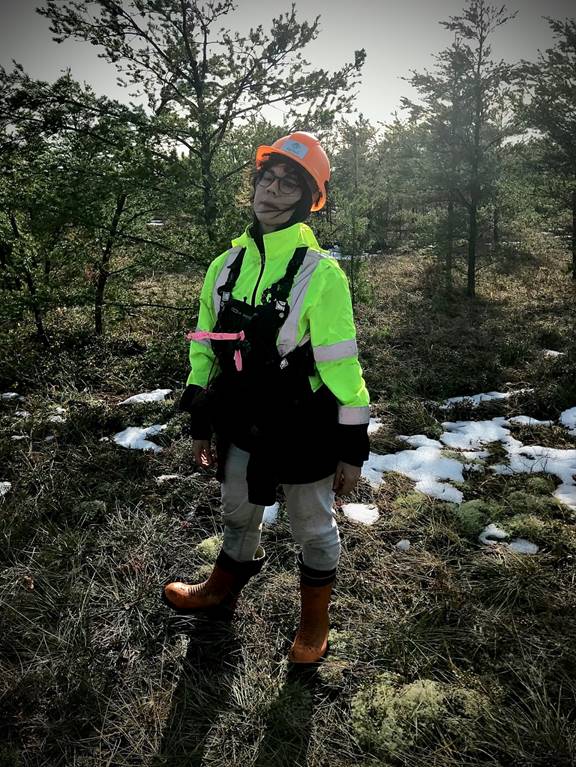 Jeanne Besaw is a silviculture forester for Nisokapawino Forestry Management Corporation (NFMC) in The Pas, Manitoba. She started working as a summer student as a forestry assistant in a Forestry Survey Program in 2013. After graduating from University College of the North’s Natural Resources Management Technology program, she was hired as a forestry field coordinator. Now as silviculture forester, she runs programs such as tree-planting, cone collection, renewal surveys and scarification.

CFI: How long have you been involved in the forest industry?

CFI: What attracted you to the forest industry?

Honestly, the forest itself. I have been in love with the forest since I was a little girl, and when I was a teenager I wanted to be a tree planter, but I never managed to do that. When I went to school, I took natural resources, and at the time, I didn’t realize that forestry was the thing that I would fall in love with. I knew I wanted to work outside in natural resources but I wasn’t sure where I wanted to go yet, and when I got the summer student position as a forest technician, I just fell in love with it.

CFI: What is involved in your current role, and what do you like about it?

I’m a silviculture forester. I run all of the renewal programs for the company the tree plant program, scarification, vegetation management, renewal surveys – anything that happens after harvest, all of those programs fall under my care. A new part of my position is working on our CSA sustainable forest management certification.

Again, I just love that it’s about the forest. In the summer I’m outside a lot doing contract supervision for our renewal programs. In the winter, I do a lot of data management and contract preparations. I could be setting up contracts and managing data about anything without really enjoying it but the fact that it’s about the forest makes me very engaged in what I do.

CFI: Have you had any mentors in your career thus far?

I have definitely had mentors in my career. I would say that most of my bosses have been my mentors. For the most part, I’ve had really good experiences with people who are supervising me, and they’ve been able to solidify that passion inside of me. They’ve encouraged a sense of independence and leadership inside of me which has been key in developing confidence in my work.

CFI: Did you come across any challenges as a woman starting out in the industry?

From the beginning I’ve worked with other women in the field, so I’ve never felt like it wasn’t a place for women. Things that could be perceived as a disadvantage, like having less upper body strength, can be overcome by having the right equipment. I feel as though I’ve been very fortunate to work with a group of people where being a female has never been something that is seen as a disadvantage.

Finding safety gear that fits can be a tough one. I usually have to special order safety boots in my size. I have a high-visibility winter coat that is not built for my body size and feels quite awkward to wear. I hear about this issue from a lot of women in forestry.

Succeeding in forestry is all about having a determined attitude towards the work, not about gender. I would say to someone interested in joining that there are a lot of women doing it and succeeding in it.

CFI: Is there anything you think needs to be done to encourage more women into the industry?

One of the things I really notice as a woman that men tend not to notice is the use of the pronoun “he” when talking about a theoretical worker – a contractor to be hired, a position to be filled. The assumption that a job was or will be completed by a man tends to happen. Even in old contracts and documents, the ‘he’ pronoun is commonly found. It’s a legacy of forestry being a male-dominated trade.

I think it’s a pretty simple act to switch to more gender-neutral pronouns. Not only does this make others feel invited into the space but it doesn’t reinforce an unconscious bias about who is suitable for a job based on gender.


Related
A rewarding experience: Q&A with county forester Lacey Rose
Logging genes: Q&A with TLA past president Jacqui Beban
The CFI Podcast: Tanya Wick on women in forestry
#EachforEqual: everyone has a role in supporting women in forestry