In Vernon, BC, Dave Marcoux, president of AcuTruss is embracing the new reality in residential construction. More contractors are ordering finished housing components from places such as AcuTruss so that they can build houses faster. “There’s also a labour savings, waste is limited, and there is better quality control,” says Marcoux, who over a 37-year span has built a company that boasts five manufacturing plants and six sales offices in the Okanagan and Lower Mainland. 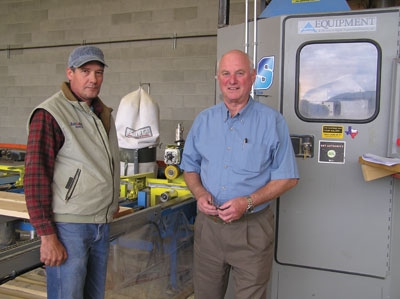 AcuTruss now employs approximately 150, has annual sales between $20 and $25 million, and is one of the largest of its kind in Western Canada. That sales figure would be even higher – if Marcoux could find more employees.  The name AcuTruss is a bit misleading, as the company has been able to put under one roof a number of component services.  They include trusses not only for the residential sector, but also for agricultural, industrial and commercial use. It also produces I-joists for flooring systems. AcuJoist Manufacturers Inc. produces I-joists under license through Nascor Ltd. 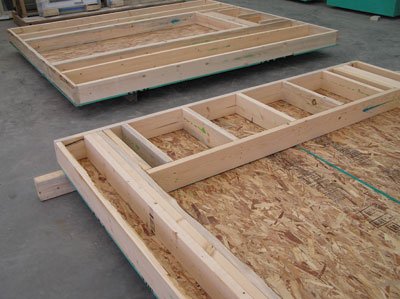 The company also has a door and window shop, manufacturing a wood window and supplying a vinyl window manufactured by All Weather Windows. The plant also supplies pre-hung interior and exterior doors. Recently, Marcoux started building structural wall components in the Vernon plant.

Marcoux says these component products shipped to a customer’s site ready to be placed into the building have proven so popular that he could produce 20 to 30% more – despite the tanked US housing market – if he could find more labour. One of the problems of having an operation centred in the Okanagan, a prime vacation and retirement destination, is that the cost of living is high. And, with flourishing wine and orchard industries, the competition for entry-level workers is stiff. 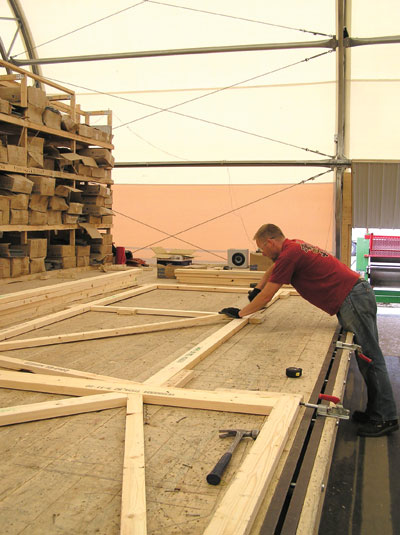 “There is no such thing as minimum wage here,” says Marcoux adding that minimum wage now runs between $12 and $15 an hour if people can be found. The plant will eventually have to turn to more automation, he figures.

Right now, the company is adapting to the changing market. The US once made up 15% of the market sector. “We have had to change to pick up more of the Canadian market – although we are still bidding some large products in the US,” he says.

The booming economies of BC and Alberta are keeping the regional housing market going, while the Okanagan region with its growing influx of retirees and vacation home buyers has its own flourishing micro-economy. Add to that a trade shortage in construction and more construction in remote areas, it all translates into good news for Marcoux’s concept of supplying finished components. A truck rolling out of AcuTruss’s Vernon head office yard is carrying the components of a home that is destined for a remote area. Not only are fewer trade skills required, but construction time to build the home is reduced, he points out.

Roof in a Day
Marcoux has seen how the housing market has changed over the past four decades, and has positioned AcuTruss to respond and grow accordingly. An engineering technician, he started as a draftsman doing designs on glulams and working for a Vancouver company where he eventually became its Central and Northern BC sales rep. A contractor John Ross and Marcoux saw the potential in setting up a truss plant. “Ninety per cent of the roofs at that time were framed,” he says.

Putting $5,000 into the pot and using a borrowed forklift, “we opened our first truss plant in Oyama on an old mill site (in 1972),” tells Marcoux, adding he ran and managed the operations and sales side of things. The housing market was booming during the 1970s and contractors saw a means of expediting house construction. “They could put a roof up in a day,” he tells.

Contractors became used to getting ready-to-erect trusses. The I-Joist floor industry followed. When the opportunity came to acquire a window and door manufacturing plant in Vernon, Marcoux (who bought out Ross) took over the business.  In 2000, “we moved to a 30,000 square foot plant in Winfield,” he said, which is the main manufacturing plant turning out trusses and I-joists.

Right after 2000, the housing market plunged, but Marcoux says that a prudent management strategy has always been to hold a financial reserve within the company and keep management wages real. As a result, the company used the downturn as an opportunity to launch an expansion, and picked up a truss plant in Westbank and another in Langley. The Kamloops plant was later added.

The lesson learned during the 2000 plunge was that residential contractors didn’t go back to framing the roof on site. The speed and ease of erecting a roof from a pre-assembled truss was still a benefit. The same held true for the I-Joist floors. “When we brought the I-Joist into the Okanagan, we took a big chance,” he said. But, 2×8 and 2×10 lumber boards were expensive and “after getting rid of a few bugs, we got going.” Contractors knew they could come to the plant with their specifications and one of the designers on staff could ensure they were getting the right product, whether for a residential, commercial or industrial application. “Now a contractor is not going to look at a 2×10. They know that an I-joist is an engineered
product and it is better than a 2×10. The floor is far more stable and a faster and easier product.”

Marcoux believes that the labour shortage and the desire by contractors to build faster will only deepen as a trend. For that reason, he launched his latest product – engineered wall panels.

“That has brought us into the wall panels,” he says, adding not only that quality control is better in a controlled environment, but again, engineers can determine the viability of the panel and ensure it meets the contractors’ specifications.

As well, the plant is using mainly machine stressed lumber rather than dimensional lumber for components. For example, all the structural top and bottom chords are 1650 machines stress rated (MSR) lumber. By using MSR and having an engineer in-house, the company can build a product that has greater strength and structural integrity. “1650 MSR lumber is used in 90% of our product,” he says.  A total of five to six million board feet are used per year.

The Big Tent
At Vernon, a new facility has been erected to house the two plants located behind the head office. “We have gone an unconventional route,” tells Marcoux. The two new buildings are actually fabric covered steel frame structures from Cover All, with the material covering expected to last 20 years or more. The bowed construction eliminates snow accumulation and the white material serves as a heat reflector in summer that still lets light through.

The nature of the business, says Marcoux, is that winter (December and January) are the slowest months and also the coldest. As a result, heat is not required year round in the building. By going to the tent facility, Marcoux estimates that he saved approximately 50% on building costs. One tent is 7,000 square feet while the second tent is 7,800 square feet. Inside are a few surprises too.

“We have installed the latest technology in saws,” says Marcoux. The new building houses the Alpine Linear Saw (ALS).  The ALS is flexible, offering angled cuts from 25 degrees to 90 degrees, both single and double bevels. It also does extremely long scarfs up to 60 inches, and cuts all truss parts from any lumber – even doing off-centreline parts, and regular and scissor bottom chords. Its high cutting accuracy and the ALS optimizing ability reduces waste. Alpine predicts waste is reduced by 10%.

Marcoux says “we just feed the lumber in” and the optimizer will determine how best to cut the lumber to achieve the maximum recovery for the product being made, such as truss or a wall panel. One of the features of the machine is that it will place a stamp onto the sawn component so that staff assembling the products can easily identify its placement.

Assembly is still labour intensive and this is the area where Marcoux sees opportunities for automation. But, the cost is steep. Last winter, AcuTruss management went to visit a Florida robotic truss plant. The robotic truss machine can layout and assemble a truss order in minutes that would normally take several hours for employees manually. But, the cost of the unit was close to $3 million. In today’s environment, that’s a decision that takes careful consideration.

However, AcuTruss’ Winfield plant is using one of the latest innovations on the market. The Laser Pilot from North Carolina based SL Laser shoots a laser blueprint of where the truss pieces should be on the jig-table. Shop foreman Jake Kunz says that “when we first installed it, the guys were really not sure of it.”  However, the laser guide provided such information as lumber thickness, plate placement and web-configuration. As a result, it’s not only made assembly faster and more accurate, but plant employees have now come to rely upon it, says Kunz.

Once wood components have been placed onto the jig board, they are locked into place with jigs and the truss is rolled through a press securing the plates. With the focus on improving productivity, Marcoux says he has no current plans to further expand at present – although he believes his business will continue to grow in the long term. Right now, having plants spread throughout the Okanagan, and one in the Lower Mainland, has given the company a transportation lift in meeting regional and local needs.

“We are still bringing in new customers. We are not having a bad year,” he says. A simple statement – but one that not too many wood products manufacturing plants can make.