Wherever you travel in Canada or the United States, the topic du jour for the past year has been the viability of natural gas to replace diesel as the primary fuel for truck transportation. And why not? Advances in fracking techniques and newfound supplies mean both Canada and the U.S. are sitting on at least a century’s worth of the stuff. And the cost spread between natural gas and diesel is significant; natural gas currently costs about 30% less per diesel gallon equivalent, a unit of measurement that accounts for the fact natural gas has less energy density than diesel. 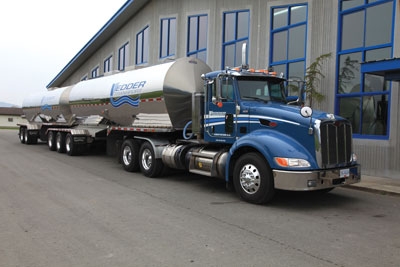 Since diesel is often the single biggest cost to operate a truck – often exceeding driver wages – it’s easy to understand why truckers are intrigued.

Truckers and fleet owners are beginning to look at natural gas as a potential salvation from rising and volatile diesel prices. And truck manufacturers have been quick to identify the trend and respond, rolling out a range of models available with natural gas. There are currently two engines from which to choose: the nine-litre Cummins ISL G, available with either compressed or liquefied natural gas; and the Westport HD 15-litre engine with LNG (liquid natural gas). Today, only the 15-litre Westport engine would suit the needs of loggers, though next year will see the launch of a Cummins ISX 12 G, which will bridge the gap between the two current offerings, yet still fall short of the torque and power requirements of most forestry applications.

You can count the number of Canadian trucking companies that use the Westport HD engine on one hand. Dairy hauler Vedder Transport in Abbotsford, B.C., runs 50; Robert Transport out of Boucherville, Que., has 74 on the road with another 180 on order; YN Gonthier of St-Romuald, Que., has two; and Calgary-based Ferus runs one. While the engines are limited in number, interest in them is apparently quite high within the forestry sector, particularly in Northern Quebec.

Eve Grenon-Lafontaine, who represents Westport HD in Eastern Canada, says that to maximize the benefit of using a 15-litre natural gas engine, trucks must haul heavy payloads and rack up plenty of miles. Truckers that serve the mills near Lac Saint-Jean, Que., hauling loads of chips grossing over 140,000 pounds, meet both those criteria. Grenon-Lafontaine told Canadian Forest Industries that interest is high among several fleets that serve the region’s forestry sector, and that should come as no surprise. Quebec loggers are very progressive when it comes to testing new technologies; as a case in point, they were among the first to see the benefits of automatic transmissions when they were introduced to the market.

Because the emergence of natural gas trucks is still in its infancy, truck production volumes are low and as such, the purchase price is high. Spec’ing a natural gas-powered Kenworth or Peterbilt will set the customer back $60,0000-$90,000 more than buying the same truck with diesel power. Most of the cost is attributed to the LNG storage tanks. To get the range required in most forestry applications, two tanks will be necessary, allowing for about 760 kilometres between refills at 4.5 miles per gallon.

Still, chip haulers in Quebec are typically burning 220,000 litres of diesel per truck each year and averaging a meagre 4.5 miles per gallon, so a 30% savings could potentially net an operator $70,000 in fuel savings each year.

“The payback on a truck could be about one year – less in Quebec,” Grenon-Lafontaine says. The same holds true in logging operations elsewhere in Canada – anywhere that trucks are pulling heavy loads and running lots of miles – but the proposition is especially appealing in Quebec, where the provincial government has got behind the cause. Natural gas burns cleaner than diesel, reducing greenhouse gas emissions by as much as 27%.

To encourage the adoption of the more environmentally friendly fuels, Quebec offers a rebate program that will refund up to $15,000 of the cost of the truck as well as tax incentives that can return another $22,000 in tax savings over a four-year period.

Suddenly, a seemingly inconceivable cost premium of $90,000 becomes closer to $50,000, and with the potential for $70,000 in fuel savings each year, a quick payback is attainable. But where will truckers fuel up their trucks? That remains an issue right across Canada. LNG fuelling stations remain scarce. However, natural gas providers are so eager to develop this new market for their product, that in some cases they’ve been willing to build fuelling facilities right at their customers’ yards.

Robert Transport has an LNG fuelling island at its Boucherville, Que., and Mississauga, Ont., locations, and Gaz-Metro is building a public fuelling site in Quebec City. Vedder also has LNG available at its own yard. Ferus, because its LNG-powered truck operates in remote parts of Alberta, uses a mobile fuelling system to keep its trucks up and running.

A forestry company could use a mobile solution, or negotiate with a gas supplier to have a fuelling station installed near its home base. You may be surprised how agreeable gas suppliers are to this idea, as they are keen to see the trucking industry adopt natural gas. Slowly, a LNG fuelling network is taking shape. In addition to the fuelling sites at fleet yards, which are open to other customers, oil and gas companies are committing to the technology. Shell has announced it will open LNG fuelling sites in Calgary, Red Deer and at other locations in Alberta next year, while Irving Oil recently committed to building five LNG fuelling stations between Halifax and Montreal.

The trucks themselves seem fully capable of the job. Drivers report improved torque and less engine noise compared to traditional diesels. The Westport HD engine is compression ignited, and requires a 5% ratio of diesel to natural gas. As such, it also requires a diesel particulate filter (DPF) and selective catalytic reduction (SCR) for emissions control. (The Cummins ISL G and soon-to-be-released ISX 12 G are spark-ignited and don’t require any diesel or SCR/DPF, but they do require additional maintenance such as the occasional spark plug replacement.)

The trick to breaking into the mainstream, Grenon-Lafontaine acknowledges, is proving to cynical truckers that the technology is up to the task in even the most demanding applications. Forestry is a rigorous application, yet she says Westport has engines performing equally demanding jobs around the world, including pulling road trains in Australia and servicing the natural gas fields in Pennsylvania and Texas. The Westport HD engine is rated at up to 475 horsepower/1,750 pound-foot of torque, but a 550-horsepower/1,850-pound-foot offering is coming online late next year. That should be sufficient torque and power to conquer almost any forestry-related job.

The other concern some truckers have is whether road taxes will eventually be applied to natural gas. Currently, natural gas is free from the four-cent-per-litre federal excise tax on diesel as well as from provincial road taxes. If a widespread shift from diesel to natural gas takes place, you can bet governments will move to tax the emerging fuel.

Proponents of natural gas say the feds are likely to provide a “honeymoon period” before applying road taxes to natural gas, but eventually taxation will be inevitable. Still, the cost spread is expected to remain significant enough to justify the added expense. The hope is that by the time a road tax is applied to natural gas, truck production volumes will have achieved some scale, bringing down the purchase price of the vehicles.

Also, the cost spread between gas and diesel is expected to widen further in the months and years ahead. Alicia Milner, president of the Canadian Natural Gas Vehicle Alliance, says there’s been a “decoupling” of the price correlation between natural gas and diesel, which used to trend together. She attributes this to growing supply in the U.S. and Canada, coupled with lower demand, thanks to the construction of more energy-efficient buildings.

“Natural gas and oil (pricing) used to track together,” Milner said during a panel discussion on natural gas at the recent Atlantic Provinces Trucking Association’s Transportation Summit. “That has now changed. These two commodities are splitting now because of the huge difference in supply in North America.”