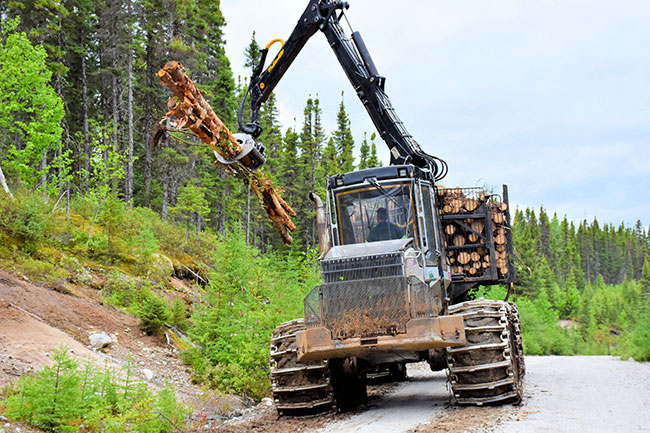 In recent years, inflation has been higher for logging contractors than the CPI.

The WICVQFC is essentially the equivalent of the Consumer Price Index (CPI), but it was designed specifically to measure changes in the operating costs of forestry contractors in Quebec over time. The index reflects only the “pure” variation in operating costs.

Why was such an index developed? Because Quebec’s forestry contractors have been experiencing significant hikes in their operating costs for several decades now, and these increases have become more pronounced in recent years with the labour shortage, unavailability of all kinds of materials (steel, electronic components, replacement parts, etc.), supply chain disruptions, generalized inflation, major fluctuations in petroleum products, and others. There is currently no way to precisely measure the impact on their operating costs, and it is difficult to pass the increases to the manufacturers who hire them. That’s why the WICVQFC was created — this tool uses official figures specific to forestry contractors to clearly show manufacturers how these variations impact operating costs.

How is the WICVQFC calculated? Since this is a weighted index, the author, who has analyzed thousands of financial statements for forestry contractors throughout his career, has established this cost weighting based on a typical forester with one tracked harvester (30-ton class) equipped with one standard harvester head, one 8-wheel forwarder with a 15-ton capacity, three pickup trucks, one service truck including all the necessary equipment and tools (generator, welder, hydraulic press, tools, etc.), with an inventory of replacement parts, lubricants, oils, etc.

Forest contractors’ expenses were then classified into six major categories: 1) labour costs and benefits/social (33 per cent); 2) costs of ownership of machinery and vehicles (25 per cent); 3) costs of spare parts and external mechanics (17 per cent); 4) costs of fuel (diesel and gasoline), oils, and lubricants (15 per cent); 5) insurance costs (four per cent); and 6) other costs (administration, training, supplies, professional fees, telecommunications, etc.) (six per cent). 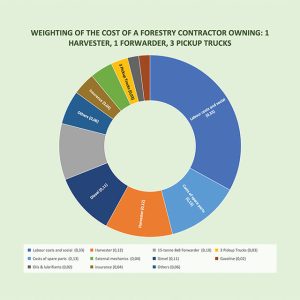 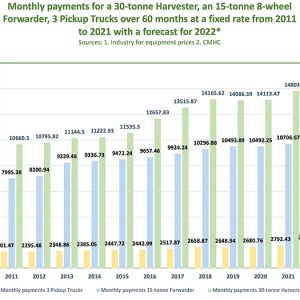 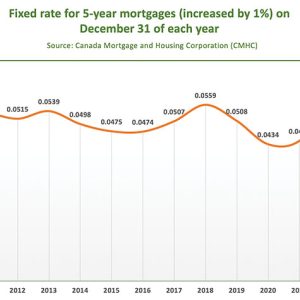 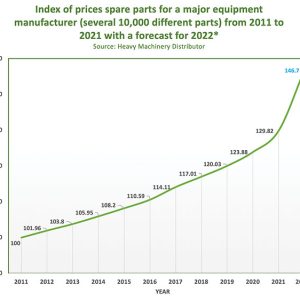 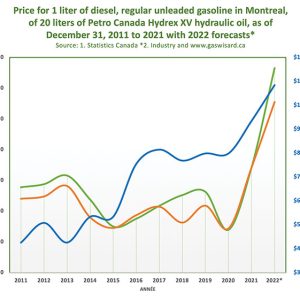 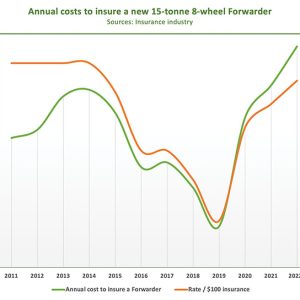 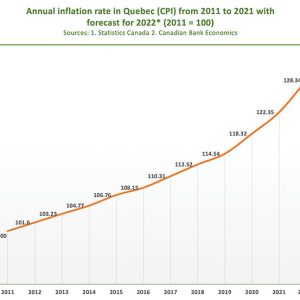 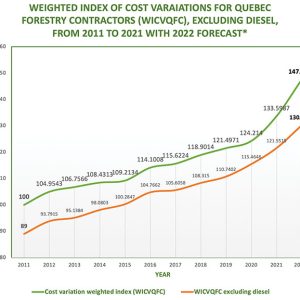 In addition, several of these broad categories were subdivided to arrive at the final weighting shown in Table 1.

Subsequently, to demonstrate variations over a period of at least 10 years, where the index was arbitrarily set to 2011 = 100, the author gathered a wealth of data from Statistics Canada, Canada Mortgage and Housing Corporation (CMHC), the economics departments of Canadian banks, the Canadian Black Book, and several official sources from the heavy equipment distribution and insurance industries. He then compiled this data to create the WICVQFC.

A WICVQFC forecast for 2022 was also developed based on the results already observed to date, forecasts from the economics departments of major Canadian banks, and experts in the oil industry, the increases already officially announced for 2022 by equipment and spare parts distributors and suppliers of oils and lubricants, and the forecast from Charted Professionals in Human Resources (CPHR).

First, for a forestry contractor’s biggest expense, labour costs and benefits, which represents 0.33 of the index, we used Statistics Canada figures on average weekly earnings (including overtime) in forestry in Quebec from 2011 to 2021, along with CPHR 2022 salary projected increases. We can see a mostly gradual increase of 40.9 per cent from 2011 to 2021 (see Table 2).

Then, for the third-highest expense, spare parts and components, as well as the use of external mechanics, for which the weighting in the index is 0.17, we obtained official data on several tens of thousands of parts and components from a major distributor. We can observe a steady increase in prices that has clearly accelerated since 2020 (see Table 6).

Finally, the fourth-biggest expense is the cost of fuel (diesel and gasoline), oils, and lubricants, which is weighted at 0.15 in the index. This is the category that has definitely fluctuated the most in the last 10 years, with prices set according to the global oil market (see Table 7). It should be noted, however, that for oils and lubricants, prices have varied much less downward. This suggests that once prices are increased for oils and lubricants, distributors consider the new price to be passed on to the customer. In terms of the 2022 forecast, when we designed the WICVQFC in March 2022, experts were projecting diesel at $2.13/litre and gasoline at $1.91/litre, so those are the prices we used for the 2022 forecast. For the time being, our forecast is very conservative.

On the other hand, for the category of insurance costs, which represent 0.04 of the index, we obtained official data from the insurance industry on the rate/$100 for a new 15 tons forwarder (see Table 8), while for other costs (administration, training, professional services, telecommunications, etc.), we used the CPI for other miscellaneous costs (see Table 9).

Finally, we compiled all the data to create our WICVQFC for the period 2011 to 2021, with a forecast for 2022 (refer to the green line in Table 10). In addition, considering that several forestry contractors have clauses that cap the price of diesel at a certain level, we excluded the weighting of diesel (0.11) from the index to create a WICVQFC excluding diesel (see the red line in Table 10).

In conclusion, the WICVQFC shows that forestry contractors have seen their costs go up by 33.60 per cent in 10 years. After gradually increasing from 2011 to 2020 at an average of 2.20 per cent per year, the index recorded a 7.56 per cent jump in 2021, and 2022 is expected to be even more drastic with a forecasted increase of 10.41 per cent, which we now consider a conservative estimate. With the exception of diesel, costs increased by 4.27 per cent in 2020 and 5.27 per cent in 2021 and are forecasted to rise 7.12 per cent in 2022. In addition, only fuel and insurance prices recorded notable downward variations over the 10-year period from 2011 to 2021. All other costs have steadily increased, and the trend has become even more marked since 2020.

Louis Dupuis is an economist, partner, and consultant with S. Guy Gauthier Évaluateur Inc. and has over 30 years of experience in commercial finance with three major financial institutions where he specialized in heavy equipment financing, particularly for the forest industry.