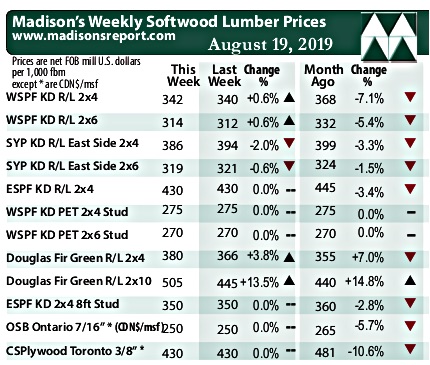 Just back from Haida Gwaii and still picking the northern Sitka spruce sap out of our hair, Madison’s quotes a large-volume North America softwood lumber trader in describing this mid-summer 2019 construction framing wood demand as a “s-lumber” market. As further sawmill curtailments were announced, specifically (again) in British Columbia, many lumber-selling players literally took the beginning of August off “gone fishin’.” The latest housing starts data out of the U.S. continued to show steady improvement, providing zero insight into why lumber sales are so uninspired.

WSPF suppliers in the United States did allow themselves some optimism last week as prices were mostly firm and some buyers showed a mote of urgency to place orders. Overall, demand was still “summer-y.” In general, sales volumes were lower, as players at all levels absconded for one last extended August vacation before the harsh reality of September sets in. Mid- to late-August order files reigned at sawmills. Yet customers remained cautious, even as their inventories whittled down to depletion.

One veteran echoed the sentiment of most producers and distributers: ‘Some of these ultra-cautious buyers may get caught’ as prices could start to go up. — Madison’s Lumber Reporter

Sellers of kiln-dried Douglas-fir lumber on the West Coast had no complaints about the market this week, especially when compared to the pricing malaise in so many other solid wood commodities lately. Douglas-fir sawmills maintained order files into late August. Earlier availability became vanishingly rare as last week wore on, suggesting tightening supply in the near future. By contrast, green Douglas-fir sawmills had the best order files out of any hemlock/fir category. A few of these producers were knocking on the door of September with their production books. Demand from California, Las Vegas, Nev., and Phoenix, Ariz., drove green Douglas-fir sales and to some extent that of dry fir as well. Most of the latter was headed to construction markets in Texas and the Midwest.

The below table is a comparison of recent highs, in June 2018, and current August 2019 benchmark dimension softwood lumber 2×4 prices compared to historical highs of 2004/05 and compared to recent lows of Sept. 2015: