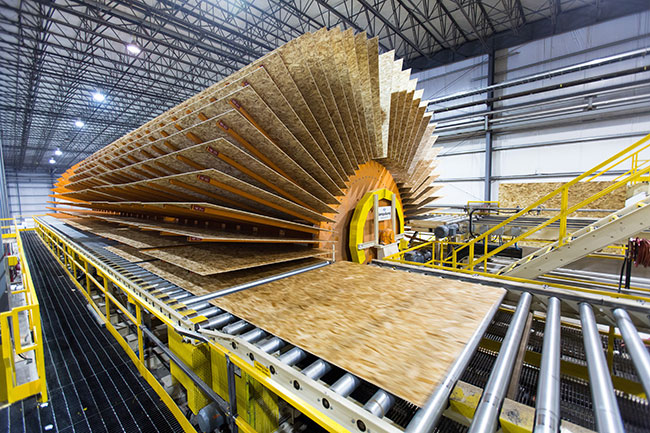 After the pressing process, the oriented strand board enters the cooling and stacking line. Photos courtesy Tolko Industries.

However, five years later, Tolko reopened the mill, and it’s been running at full-speed ever since.

“It’s a world-class asset, and we were excited to get it back into operation,” Trevor Brander, area manager for Tolko, says when asked about the motivation behind restarting the mill in 2014. “We wanted the economics to be right so that it could be sustainable from a profits perspective.”

Today, the mill has a production capacity of 830 million square feet on a 7/16-inch basis, and produces a wide range of products, from 3/8-inches-thick to 1.75-inches-thick, Brander explains, in lengths from 4×8 to 8×24. They produce residential sheathing, value-added panels, specialty industrial panels and laminated strand lumber.

The mill gets its fibre mix – which is primarily aspen, plus some black poplar, birch, pine and spruce – from the surrounding area, where Tolko has their own license. They also trade fibre with softwood lumber mills in the area and buy some fibre from private woodlots.

Unlike many wood products producers in B.C., the Athabasca mill is not struggling with fibre supply. “We’re well-supplied with good, high-quality aspen around here,” Brander says.

That’s good news for the mill, as demand for OSB products has skyrocketed in the past year, thanks to the strong housing and repair and remodeling markets in North America.

To meet that increased demand, four crews of workers – 188 people total – keep the mill running 24/7, 365 days a year. And, last year, Tolko decided to install a new ripline to increase their capacity, flexibility and product availability.

A fully integrated ripline
The ripline, which allows the mill to run widths down to 3.5 inches and lengths up to 24 feet long, is fully integrated with the mill’s continuous LSL press from Siempelkamp. To get to that point, logs first start out in two 16-foot-wide ponds, where the mill can ensure they develop uniform moisture and control their temperature. The logs are then lifted by a rail-mounted Tanguay PL350HD grapple loader that pulls the logs into two Andritz rotary debarkers.

Tolko, like many other wood product producers, tries to use as much fibre from each log as possible – the Athabasca mill produces all of its heat internally using the bark removed by the debarkers. That bark goes through a hog and then into furnaces from GTS, supplied by Sigma Thermal. The furnaces also direct-fire the dryers at the mill.

After debarking, the logs go to two Kadant Carmanah stranders, where they are broken down into seven-inch strands. Those strands are conveyed through a Unifab conveyor system – consisting of 10 conveyors – to wet bins that hold the strands before they are screened through IMAL-PAL green screens. The strands then go through one of two Buttner dryers and then to one of three Coil Manufacturing blenders. From there, the product goes into the Siempelkamp forming line and press.

“We’ve got six formers and then we’ve got the big Siempelkamp continuous press that has a steam pre-heater on it as well,” Brander explains.

The press is approximately 71 metres long by 2.5 metres wide – the largest of its kind in North America. After the press, the boards go through Siempelkamp sawing, cooling and stacking lines. The finished boards then go to two packaging lines, featuring a Samuel Strapping system, and are then shipped to market by truck or rail.

However, products that will be ripped are piled into “master billets,” instead of going to the packaging lines. A bridge crane moves them into the mill’s automated warehouse system, where they can be stored until they are fed to the ripline via a Con-Vey feeder.

The ripline features an eight-foot-wide rip saw from Progressive Saw, supplied by Con-Vey, which enables the mill to deliver the entire suite of ripped product widths.

“From there, the ripped product gets stacked into columns, painted in columns, and then the columns are formed into a master package, which is then strapped. We have the opportunity after our strapper to segment the stacked packages into shorter ones,” Brander explains. “So, for example, one of our popular products is a 12-foot-long 11-and-7/8ths rim board. On that product, we’ll take a 24-foot long 11-and-7/8ths master package, and strap it so it can be segmented into two 12-foot packages and then painted, wrapped and out the door.”

So far, Brander says the ripline is working well. 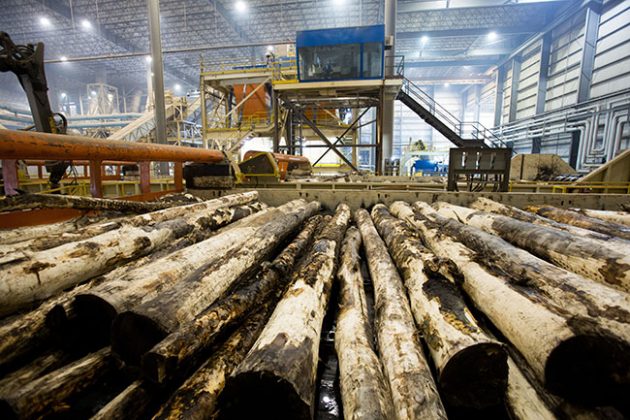 LEFT: After passing through the debarker, the logs move to the stranders to be precision cut into strand.

Challenges posed by COVID
But, the process for installing the ripline was complicated by the COVID-19 pandemic.

“The commissioning straddled the pandemic. So, it was difficult to meet our timelines,” Brander says. “We purchased the majority of the equipment from Con-Vey, which is out of Roseburg, Ore., and, of course, when the border’s closed, that becomes difficult. So, we ended up installing a lot of cameras around the line and doing a combination of remote installation and commissioning with them and some local firms.”

COVID-19 has also impacted Tolko Athabasca’s ability to work with other suppliers. Much of the mill’s equipment comes from suppliers outside of Canada, which means that it has been difficult to get experts to the mill to help them audit and maintain their equipment, Brander explains. As a result, the mill has had to push back their annual maintenance shutdown.

But, the pandemic did not cause the mill to temporarily curtail or halt production last spring, as other sawmills did.

“We’ve been full-out since the on-set of the pandemic. Our employees remain safe and healthy, and we haven’t had any outbreaks in the plant, so that’s been really great as far as our employees’ commitment to their own health and safety,” Brander says.

Looking ahead
Although the mill is still in the final phases of commissioning the new ripline, Brander says they are already looking at new upgrades.

“We really like the LSL product that comes out of this plant. We’d like to make it so we can increase our capacity and our performance on these products,” he says. “So, we’d like to look at some dry screening, because right now we just have green screening.”

But, for now, with the strong demand for lumber and OSB products, Brander says Tolko is happy with how the mill is running. He expects market conditions will continue to be good in the immediate future, although the record-high prices are unlikely to last.

Consequently, the future for the Athabasca mill looks bright, he says.

“With this plant, with its flexibility and its capabilities, I don’t foresee many challenges. We’re keeping safety as a top priority and the future looks great for the Athabasca division.”