Features Harvesting Logging Profiles New Gear
‘A world of difference’: a look at the impact of technology on loggers’ operations 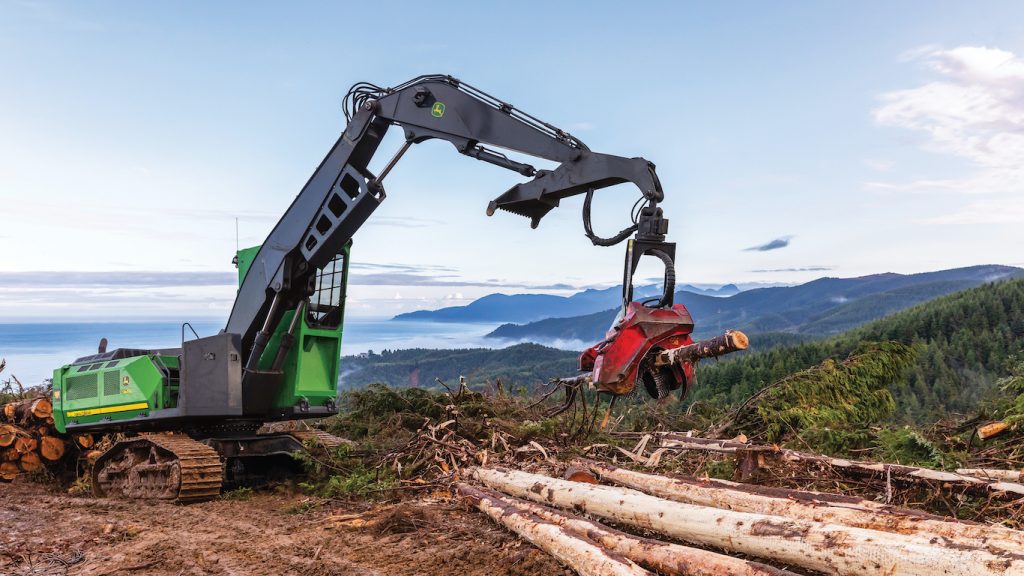 On February 17, John Deere hosted a virtual panel discussion focused on the impact of technology on loggers’ operations.

Technology in the forest industry has made big strides in recent years, making loggers’ jobs more efficient and, therefore, profitable. The first pieces of technology the panelists implemented were fairly simple, but effective.

Stratton first invested in scales, when the nearby sawmills put a weight limit on how much timber they could haul. As a result, the company bought lighter trucks and trailers so that they could haul more wood.

For Dickinson, the first piece of technology he invested in was the Avenza maps application, which allowed him to see his location in the cut block and avoid difficult terrain. This meant he no longer had to go out into the block layout with a paper map and a compass, hanging ribbon to mark the boundaries of the block.

Moore agreed, noting that “technology has allowed us to avoid hanging up ribbons and having to take them down.”

The switch to digital, with new technology such as John Deere’s TimberMatic Maps and TimberManager, has “really saved us,” he said.

Since investing in TimberMatic Maps and TimberManager, Johnson has trained four different operators using the set-up, and found that the technology helps make training more efficient.

“I can pull anybody off the street right now, and if they can drive a pick-up truck, I can put them in a skidder and have them up to speed within seven operating days,” he said.

Moore has had a similar experience when it comes to training new operators.

“Technology has removed a lot of the doubt – they can look on the screen, know exactly where they are, the back-end of the cut boundary,” he said. “It gives them confidence, and they don’t waste time walking around, on the radio trying to figure out where they are.”

And since the technology is in the machine, anyone can use it.

“They get more confident with it – the map is sitting right there and it’s easy for them to learn and pick up,” Stratton added. “If we go to a block, and they just put in the number of the block [in the program], everything’s loaded there. It takes all the guess work out of everything.”

With the added digital technology in their operations, it also makes it easier to attract and retain younger employees.

“I’ve taken a couple of guys who had next-to-no operations experience and put them in the machine. This one guy had never seen a logging site in his life, and within two weeks, he was almost up to the same level as my experienced operators. It definitely helps to get them up-to-speed and retain them longer,” Johnson said.

“It definitely helps to retain them because, for a new guy, it’s quite stressful – there’s a lot going on in the woods – and having this technology takes some of the stress off. We do work long hours, so anything you can do to make your day easier and a little less stressed helps people and keeps them coming back,” Dickinson added.

The learning curve, in the panelists’ experience, has not been very steep. Moore noted that while they do have fairly young operators, they also have a number of older operators who haven’t had trouble picking it up.

Technology has also helped operations become more efficient overall. Within a month of implementing TimberMatic Maps and TimberManager, “we noted a two-load-a-day increase out of our skidder operator,” Johnson said.

He uses TimberManager to oversee his crews, and JDLink to monitor the performance of each of his machines. Since he implemented this technology, some of his machines have even become obsolete.

“With TimberManager and TimberMatic Maps, I can make one machine so efficient, that we’re able to reduce the fleet size and save us money on insurance,” he shared.

TimberManager also helps Stratton keep track of his crews, who are sometimes 50 miles apart. With this software, he can answer operator questions, monitor their productivity and see what they’re seeing in real-time. This keeps him from having to be physically present at each jobsite, so he feels more secure leaving his operators to run the equipment on their own.

Meanwhile, TimberMatic Maps has helped Dickinson improve his productivity because he can build cut block maps in his office, and then send them out to his crews, who can view them in their machines. His crews are operating 24 hours a day, which means that they sometimes move to a new cut block in the middle of the night.

“Now, I can build the map and send it to them, so when they move to a new block, they can pick it out, have the map right in front of them, know where they are in the block and what’s there for production,” he explained. “It’s saved a lot of manpower and running around.”

Moore shared an innovative use of a different type of technology – laser scanners. His company, Mountaineer Mechanized LLC, runs log sorting yards, sorting for high-quality hardwood timber. Each log gets a barcode tag nailed to the end of it after it has been weighed. To be able to record each log, they used to have an operator on the ground scanning each log.

But, the company built a scanner onto the end of their knuckleboom loader to improve productivity and safety. Now, each time the operator swings a log in front of it, the scanner can read the barcode, and the log is recorded in the computer, inside of the cab.

Each of the panelists have seen strong returns on their investments.

For Dickonson, the mill he works for feels more comfortable working with him, knowing that his operators have maps in their machines and therefore won’t cross the cut block boundaries. As a result, the mill has allowed Dickson to do more work for them.

For Stratton, the technology has opened doors for his company in the construction industry. “I’m getting jobs I never thought I would get,” he said. “I would recommend it to everybody because it makes a world of difference.”

An earlier version of this article incorrectly spelled Seth Dickinson as Seth Dickson. CFI apologizes for this error.