June 6, 2015 - When the Supreme Court of Canada upheld a lower court ruling in mid-2014 relating to the legal powers of First Nations over large tracts of territory outside their reserves in the B.C. Interior, some called the decision “staggering” and “game-changing.” Before we get into whether or not these adjectives are correct, exaggerated or accurate, let’s look at the original court case. 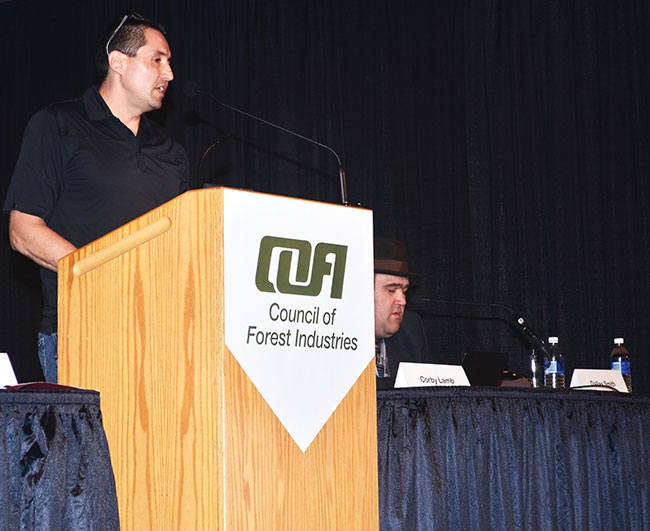 McLeod Lake Indian Band Chief Derek Orr discusses the successes of his band and the partnerships and benefits that can be held from working together and sharing the resources during a conference session at COFI 2015. When the Supreme Court of Canada upheld a lower court ruling in mid-2014 relating to the legal powers of First Nations over large tracts of territory outside their reserves in the B.C.

The dispute that ended up in the courts a year ago involved over 1,700 km2 in B.C.’s central Interior, an area that had been for hundreds of years the traditional territory of six Tsilhqot’in First Nation bands that share a common history and culture. The First Nations were objecting to proposed logging on their traditional hunting grounds, and the province of British Columbia was the defendant.

The Supreme court judges stated in their 2014 ruling that aboriginal land title “flows from occupation in the sense of regular and exclusive use of land… tracts of land that were regularly used for hunting, fishing or otherwise exploiting resources, and over which the group exercised effective control at the time of assertion of European sovereignty.”

The ruling upheld a lower court recognition that First Nations have some degree of collective rights where aboriginal land title is proven or asserted on territories outside their continuously-occupied communities or formal treaty boundaries. Although the decision obviously applies across Canada, it is of most importance in B.C., where large areas of land exist without treaties.

Robin Junger observes that in many ways, the decision simply confirms what the Supreme Court of Canada said about aboriginal title in 1997.

“But because this is the first time that a court has actually made an order finding aboriginal title in a specific piece of land, the case has received a lot of attention,” notes Junger, who is a partner and national co-chair of the Aboriginal and Environmental Law Groups, and co-chair of the Oil & Gas (B.C.) Group at McMillan LLP law firm in Vancouver.

He says the 2014 decision does not really change the law in terms of government’s obligations and its ability to continue to govern (subject of course, to certain requirements). However, Junger adds, “It appears to have created increased expectations by many, and so that alone may have some effect on the time required to deal with aboriginal consultation and related matters.”

In response, the government has developed regional “strength of claim” teams to facilitate a consistent provincial approach for consideration of Aboriginal title claims in consultation and decision-making processes. In addition, ministry staff held three workshops in late 2014 in Nanaimo, Kamloops and Prince George with forest licensees and First Nations to review the impact of the Tsilhqot’in decision on processing cutting permits.

Court ruling
But before we look at what will or will not change for forestry companies with this ruling, let’s look again at the ruling itself.

“It’s necessary to distinguish lands that are the subject of claimed title (which is most of B.C.) and those for which title has been proven (which at present is just roughly 0.2 per cent of B.C.),” Junger explains. “Where title is claimed but not yet proven, government simply has the [same] duty to consult and accommodate that it has had since the 2004 Haida decision of the Supreme Court of Canada.”

Junger adds that the 2014 ruling affirms clearly that aboriginal groups have no veto in those circumstances.

If, when and where aboriginal title is proven, he explains, it is true that aboriginal consent will be required, or the government must be able to “justify” infringements of that title. The justification, Junger says, will require government to consult, and to consider things such as how the aboriginal interests compare to larger societal interests, whether the infringements are minimized to the extent possible, and whether government has compelling reasons for allowing that activity on title lands.

It is critical, Junger stresses, that everyone understand that the duty to consult and accommodate in the pre-proof-of-title context – and the obligation to obtain consent or justify infringements in the proven title context – rests solely and completely with the government.

“These are not obligations that apply to companies,” he says. “Though companies obviously have an interest in ensuring government meets its duties and in working constructively with aboriginal groups wherever possible.”

Changes for forestry companies?
”As a matter of law, nothing has changed in terms of what resource companies must do, and again, the duty rests with the Crown, not private companies,” Junger explains. “In practice though, the decision has in some respects increased expectations, and it is just one more reason why it is beneficial for companies to try and find common ground with aboriginal groups wherever possible.”

The Supreme Court of Canada has worked very hard [with the 2014 ruling] to establish ground rules that it believes will allow reconciliation of aboriginal and non-aboriginal interest going forward. It would be a shame if anyone reads the Tsilhqot’in decision as one of winners and losers, or if we fail to talk about all aspects of the decision, including those that deal with government rights to govern.”

Defining accommodation
On land where aboriginal title is asserted, governments must at a minimum consult with local First Nations, and as appropriate, “accommodate” their interests. Vivian Thomas, communications director at the British Columbia Ministry of Forests, Lands and Natural Resource Operations, says the ministry’s approach to consultation and accommodation is based on the 2004 Supreme Court of Canada “Haida” decision. She also notes that they have been working with First Nations for many years, “given the size of our forests, and the importance of them to the provincial economy as well as to the First Nations [people who] live in them.”

Thomas points to revenue-sharing as one form of accommodation, and that since 2002, the B.C. government has signed 177 “Forest and Consultation Revenue Sharing Agreements” with First Nations, providing over $382 million in revenue sharing.

“Another accommodation is the provision of forest tenures to First Nations, so they can pursue economic development opportunities,” Thomas explains. “Since 2002, the Ministry has entered into 190 tenure agreements with First Nations through its direct award program, and granted over 350 licences with a total harvestable volume of 180 million m3.”

Altogether, the amount of allowable annual cut (AAC) controlled by First Nations has increased from about 1.3 million m3 in the mid-1990s to a present-day 10.7 million m3, which is over 13 per cent of the provincial AAC.