Pro Link Logging is no stranger to the challenges facing the B.C. Interior industry. With the province's recent forest policy changes, adaptability is more important than ever. 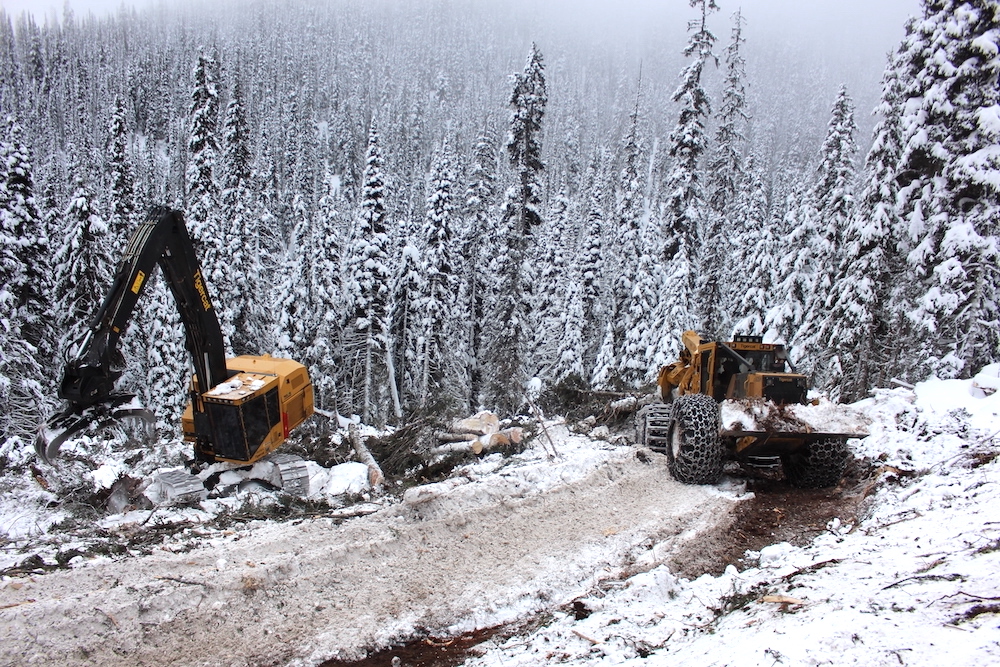 Pro Link Logging out of Quesnel, B.C., is investing in new steep slope equipment in order to reach the less accessible wood in their cutblocks. Photo courtesy Pro Link Logging.

Like most loggers in B.C., Tyler Backer, owner of Pro Link Logging, is facing a lot of uncertainty in the wake of the B.C. government’s decision to defer the harvest of 2.6 million hectares of forest identified as old-growth. Pro Link Logging, based in Quesnel, B.C., has historically relied heavily on BC Timber Sales, which have been paused until First Nations rights and title holders indicate a preference on the proposed deferrals.

Pro Link is no stranger to the challenges of the forest industry, and has learned to adapt over the years, diversifying its business and investing in new equipment.

Backer’s father and uncle, both experienced loggers, started the company in the late 1990s. In 2009, when his father passed away in a motorcycle accident, Backer took over the company.

“We mostly survived up until then on BC Timber Sales – that’s why it’s such a big thing, the government not advertising any more sales until they sort this out, because our livelihood relies on timber sales,” Backer says.

However, when he became owner, Backer decided to diversify Pro Link’s harvesting operations, purchasing a 140,000-cubic-metre evergreen contract with West Fraser. This, in addition to his side business running a gravel pit, will help Pro Link combat the uncertainty brought about by the old-growth deferrals, he says.

Today, Pro Link Logging employs 45 people year-round and another five in the winter when harvesting operations ramp up. Of those 50 people, approximately eight are logging truck drivers, four are gravel truck drivers, and five work in the office or in the maintenance shop.

Approximately 25 people work in the bush, alongside Backer, who works in the field three days a week and in town twice a week. 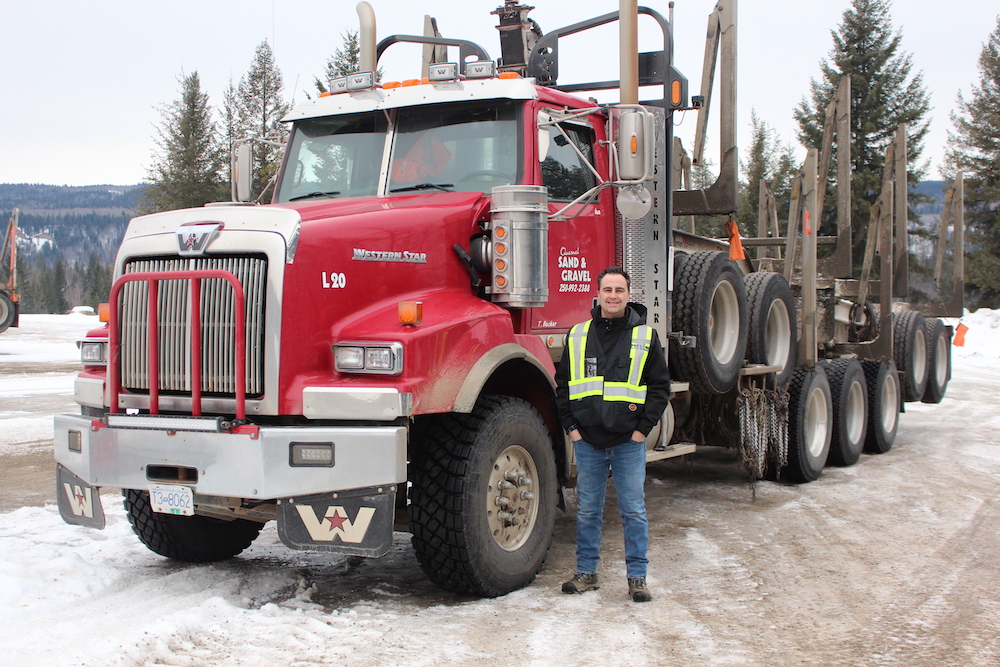 But, a lot of the wood is getting further away, and becoming more challenging to harvest. Consequently, Pro Link is investing in new equipment for steep slope logging, including a new TimberMax head for one of the company’s feller bunchers.

“We’re going to start tethering our machines on the side of the mountains starting later this winter or early summer,” he explains.

“A lot of the easy ground is gone, so we’re forced to attack the hills,” he continues. “Especially if we want to continue on with the size of crew that we have. The mills are having a harder time finding conventional blocks that we can operate at the capacity we’re at, so we basically have to adapt.” 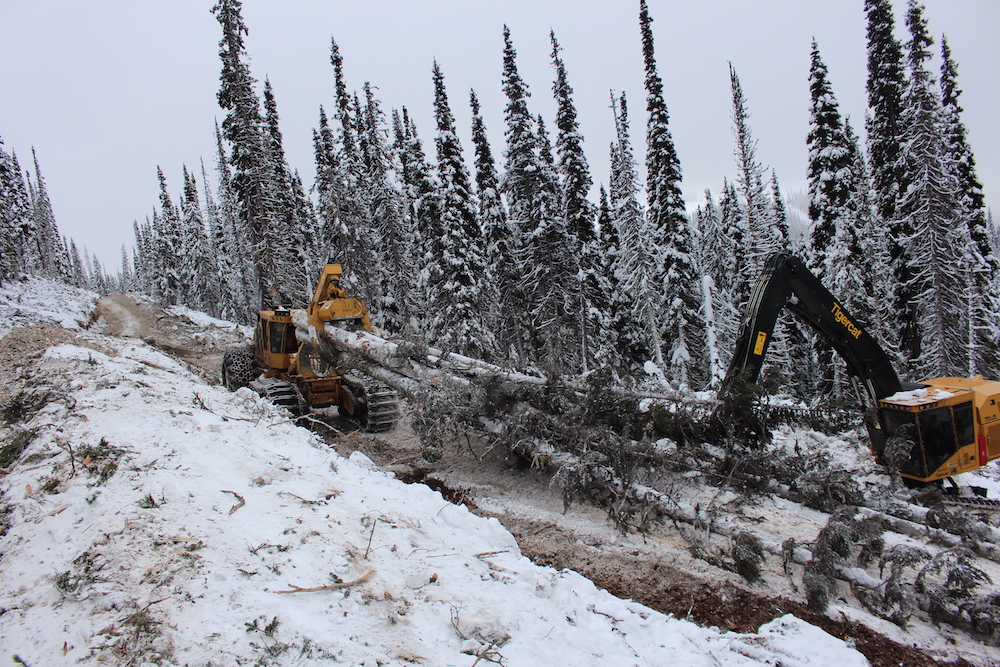 Pro Link has already done some steep slope logging, and the new equipment will contribute to the operators’ safety, Backer says. Until now, the company has been using a tilting John Deere 959M feller buncher, two six-wheeler 635E and 635H skidders and a Tigercat 855E with an IMAC powerclam. A new Tigercat 870LXD feller buncher will replace the John Deere buncher this winter.

“We really like the Tigercat brand. They have good mechanics, good service, the dealership treats us well and the equipment is good,” he says. “It’s robust; it’s stable on the steep slopes and has lots of power to get around on those hills. It’s pretty amazing where they can go now. We’ve logged some pretty steep ground with that stuff.”

However, Backer admits that there are some logistical challenges when it comes to logging on the hills.

“It’s like orchestrating a concert, keeping everybody organized, because when we’re on the hill, we usually put a couple of skidders and hoe chuckers out, and everybody has to work together. It’s not like on a flat block where everybody can go do their own thing and then at the end of the day go home,” he explains.

Being organized and having a safe plan for operators to get wood off of the hill is critical, he says. If his crew is harvesting in an area with a road system or a switchback, Backer will start harvesting at the bottom of the mountain and work his way up. This way, they can find spots to put the wood as they move up the mountain.

Pro Link’s log hauling employs around eight log truck drivers and five contract drivers. The company has six trucks from Kenworth and another two from Western Star, along with five Kenworth trucks for their gravel pit business.

These gravel operations have helped the company stay afloat despite the industry’s ups and downs. Backer’s father had purchased the gravel pit to act as a sort yard for logs from BC Timber Sales.

“It was a really good sort yard because it was hard ground and we were able to run it all year,” Backer says. “After we weren’t able to do the sort yard anymore, we started selling gravel out of there.

“It’s nice because in the spring, as it gets slow here, I will concentrate on doing more construction projects if I have to, to keep our guys going.” 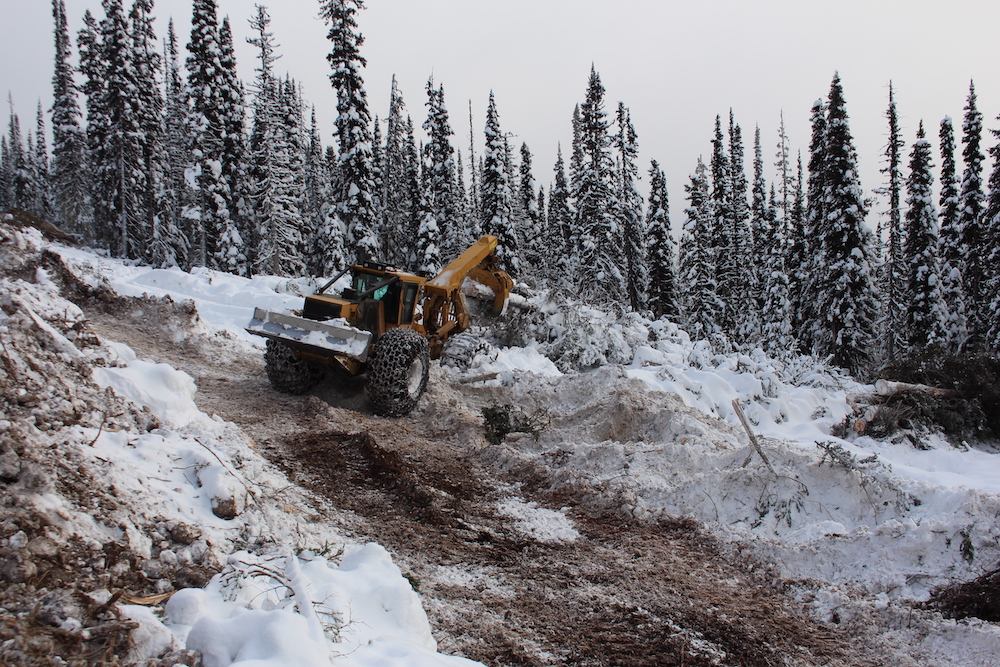 On top of this, Pro Link also does some road building, constructing around 70 kilometres of road per year. To do so, the company has invested in several pieces of equipment, including two Hitachi 260 excavators, a Case 210 excavator, two Caterpillar dozers, an 850J John Deere dozer, a new John Deere grader and a Champion grader.

With such a large fleet, Backer, like other logging contractors, has to contend with rising equipment prices.

“Everything is sort of creeping up on us. It’s getting more costly to run a business nowadays,” he says. “Before, say your target was to have X amount of money at break-up to carry you through it and do repairs on your equipment. But, now, even if your goal is to have that much money in your account, it’s not going to go as far.”

To tackle this issue, West Fraser installed FPDats – a monitoring tool that collects and analyzes information on a machine’s productivity and performance – on some of Pro Link’s machines. Backer believes that going forward, monitoring equipment and fuel usage will be critical to stay on top of operating costs.

“That’s why I usually try to go to the bush three days a week and two days in the office, looking at jobs. If you don’t do that, you just can’t keep up or you work Saturdays,” he says. “I try to work roughly 14 hours a day, five days a week, to keep a cap on everything. If I don’t spend two days a week in town, I’d be working six or seven days a week.”

This set-up allows him to spend time with his two young daughters during the weekend, along with his wife, who occasionally helps with the business.

“We have a lot of skilled employees that play an important role to keep our business running, which has contributed to our company’s success,” Backer adds.

“I really enjoy what I do – I have a good relationship with the mill, I enjoy my crew and the people I work with. That’s why I continue to do it. But it seems like there’s always challenges,” he continues. “We’re still trying to get over the hurdle of COVID-19 that we’ve all dealt with, and now it seems like things are starting to come together, lumber prices were looking strong, and the government slapped this old-growth [deferral] on us. It would have a pretty big effect on our business if it did go through.”

Backer is unsure how the old-growth deferrals would work if the First Nations rights and title holders decide to indefinitely defer harvesting in the proposed areas.

“My concern is, if they’re going to spread it out through a block where you’ve got to leave all these old-growth trees, I’ve done that before on mule deer winter range blocks, and you come back the next year and it’s all blown down,” he explains.

For Backer, pausing the harvesting of old-growth is not proper forest management, given that aging trees deteriorate and don’t contribute as much to the environment as a young tree.

“You might as well log as much as is renewable, and we have a good working forest, good forestry companies that are managing the forests here, so our cuts are limited already,” he says. “It just seems like a waste of real estate to me to leave a bunch of trees standing that aren’t going to contribute anything to our reforestation as well as forest health.”

But, for now, industry must wait to hear what will happen with the old-growth forests. So, Backer is focused on implementing the new tethering system for steep slope logging and understanding its impact on his operations.

Although most of Backer’s harvesting operations will continue to be on flat ground, the steep slope equipment will allow Pro Link to log previously inaccessible cut blocks.

“If that works out for us and we can make it safe and profitable for our business, then we’ll continue on with that. If that doesn’t work out or I’m not happy with that, we’ll adapt to another system,” he says.

“You have to try your best, and sometimes there are things out of your control that you can’t make changes for or predict. At the end of the day, you just have to adapt.”