The drones allow for quick and safe tree planting in areas where rapid reforestation is needed, or traditional tree-planting may be difficult. 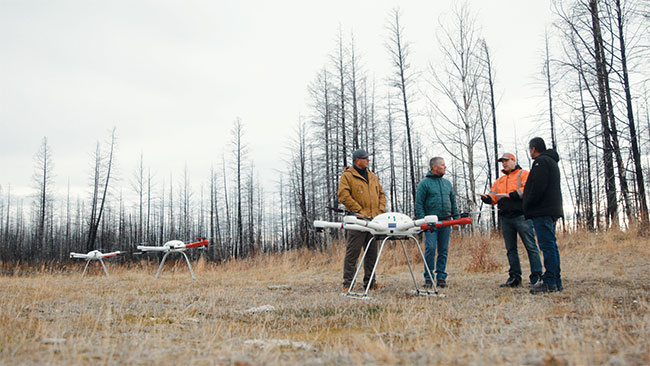 The drones were on-site last fall in the Chilcotin plateau area where two high-intensity wildfires – among the largest the province has seen – tore through the region in 2017. The project saw more than half a million nutrient-packed seed pucks distributed by using drones and hand-deployed over a two-week period.

CCR is a joint venture company between Tsideldel First Nation and Tl’etinqox Government. CCR director Percy Guichon tells CFI the use of drones in silviculture was the next logical step after years of deploying drones for other aspects of forest management.

“After the fires in 2017, there was a lot that needed to be done in terms of getting these forests back up and growing. We’ve always had it in the back of our mind that we needed to look at other technology to assist our planting,” Guichon says.

From 2017 to 2021, Tsi Del Del Enterprises and other local logging contractors recovered as much of the salvage timber as possible in the burn area. Once salvaging operations are finished, the sooner tree planters get into a burn area the better the chance seedlings can grow before grasses and brush take over.

The drone project is a trial that allows for quick and safe planting in an area where rapid reforestation is needed, or traditional tree-planting may be difficult. 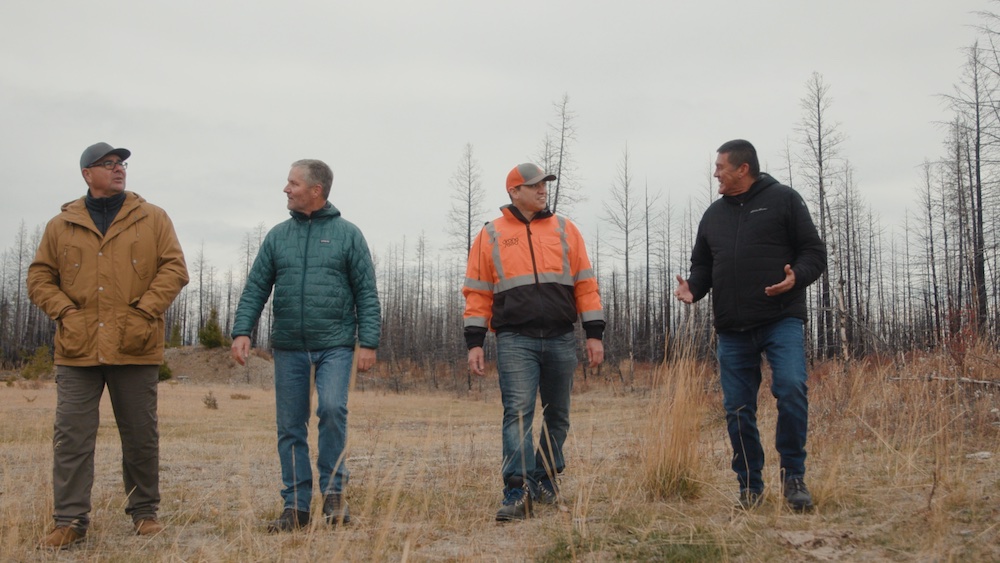 Tsi Del Del Enterprises forestry superintendent Danny Strobbe oversaw the drone project from inception in the fall of 2020 through implementation last year and will be monitoring results this spring and fall. Strobbe said he saw DroneSeed – a reforestation company out of Seattle, Wash. – as a natural choice to take on the project.

“We had a really good first initial meeting and we really ran with it,” Strobbe says.

DroneSeed provided all supplies and equipment needed to see the project through. Founded in 2015, the company custom engineered its drones to be capable of deploying more than 50 pounds of seed pucks per aircraft – each of which is eight-feet in diameter. The company also owns Silvaseed – the largest private seed bank in the U.S. West and seedling supply business based in Roy, Wash. – completing their reforestation offering.

Cassie Meigs, the director of account management with DroneSeed in charge of the CCR project, says it was their first operational project in Canada, which resulted in some lessons learned about the regulatory environment.

The biggest challenge of the project was simply navigating international COVID-19 restrictions. DroneSeed, being a U.S. company, had to jump through some hoops to get their product and people into Canada.

“The biggest hurdle we had was getting across the border,” Meigs says. “In the fall of 2021 there were a lot of COVID-related travel restrictions. It was a lot of heavy lifting on our side to get the necessary paperwork and permits in line … We were delayed a little bit, but the stars aligned for us to succeed in this project.”

The CCR project began with site preparation, followed by a LiDAR survey flight by DroneSeed, and aerial seeding took place in the fall. All told, the project was implemented in nine months from initial correspondence to execution.

The project site is close to town, which made seed deployment less challenging than if it had been in a remote location. Drones are affected by weather conditions, so the DroneSeed team needed some flexibility in the timeline.

During the two-week planting phase last fall, DroneSeed’s team of six operated three drones as well as had CCR crews support in hand deployment of seed pucks in three separate seed lots. DroneSeed’s seed vessels or pucks are made from a lightweight fibre loaded with a customized mix of local pine and fir seed with various amendments to help the seeds germinate and survive, including bird and rodent deterrents.

The drones are equipped to track their speed, location and the rate at which pucks are deployed, all of which allows the team to know roughly where each puck landed and what seed lot was used. CCR has access to that data in order to monitor the site for years to come. 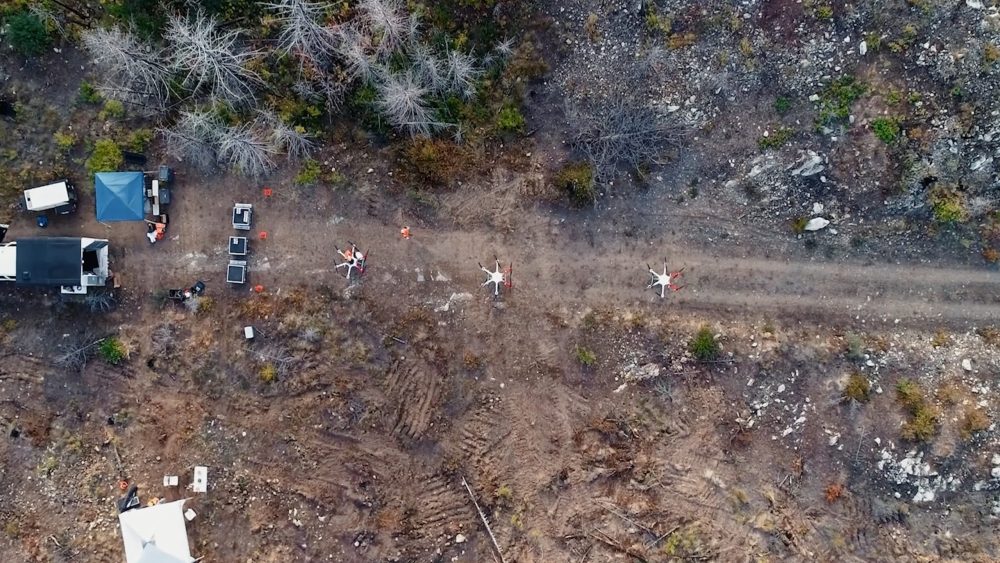 DroneSeed’s three heavy-lift drones are staged in preparation to disperse seed vessels over the Chilcotin plateau.

With B.C.’s fire seasons lengthening and intensifying year after year, it’s created a backlog of demand for reforestation across the province, Guichon says, both for the manpower and the seedlings typically used. Demand has also increased the costs of reforestation.

“The planting companies are stretched to the limit. There is so much work for them. This project is just another method to complement the planters,” he says.

Seedlings take up to three years to be ready for planting once an order is made at a tree nursery. DroneSeed’s pucks, by comparison, take 60-90 days to manufacture before they are ready for deployment.

“You could essentially deploy it the fall after a wildfire,” Strobbe says. “If you can get the seed on the ground faster, they have a better chance of germination before the grass and everything comes in.”

Meigs confirms that DroneSeed sees the aerial projects as a rapid response to wildfires. Ideally, she says, the seed pucks would be deployed within 90 days of a fire when the mineral soil is exposed and when forests would naturally be dropping their cones.

“DroneSeed aims to respond quickly with aerial seeding after a fire while also starting to grow seedlings in the nursery and interplanting later to achieve the stocking objective of the landowner,” Meigs says.

The intensity of fires like those in the Chilcotin plateau leads to areas where there is little to no natural regeneration happening, Strobbe says. The fires burn too hot, leaving no surviving trees to disperse new seeds. “Unless we do something, whether it’s planting or seeding, it will take hundreds of years to regenerate,” he says.

More tools in the toolbox

The area of reforestation required from the 2017 fires is more than 3,000 hectares involving nearly six million seedlings. The drone trial covered only 52 hectares of that. With success, Guichon and Strobbe can see drones being more widely used and upscaling to larger projects in the future.

“It’s not meant to replace tree planting. It’s another tool to supplement where it’s too steep or there are danger trees or you just can’t access it,” Strobbe says.

The next phase of the trial is to survey the seeded sample plots over the spring, summer and fall to see where the seeds germinated successfully.

“We’re hoping to see some germination come spring, with having the seed deployed before winter. This spring, with nice moist soil, they will hopefully have a chance to germinate,” Strobbe says.

DroneSeed will monitor the site and visit with the CCR team a few times this year to check on the success rates in several seed plots.

“The sown seed is naturally stratifying on the landscape over the winter and once the ground thaws in the spring, the seeds will begin to germinate,” Meigs says.

“For the initial monitoring we’re going to have to get down in the soil, find the pucks and the seed and then look for tiny little germinants. We’re really not going to determine the success of germination and initial growth until at least fall 2022,” she says.

Silvaseed is already growing 50,000 seedlings that will be shipped up to CCR for supplemental fill planting where there were gaps in stocking. “Where there were areas that there wasn’t success or we didn’t quite meet stocking, you have that follow-up to ensure that you are putting trees in the ground to fill those gaps,” Strobbe says.

While the first-of-its-kind drone project had more costs than traditional planting, Strobbe and Guichon say that with the right strategy for scaling it, the costs could be brought down to be competitive.

The project was financially supported by the Forest Enhancement Society of BC and the federal government. Find a video of the drones in action at www.fesbc.ca.