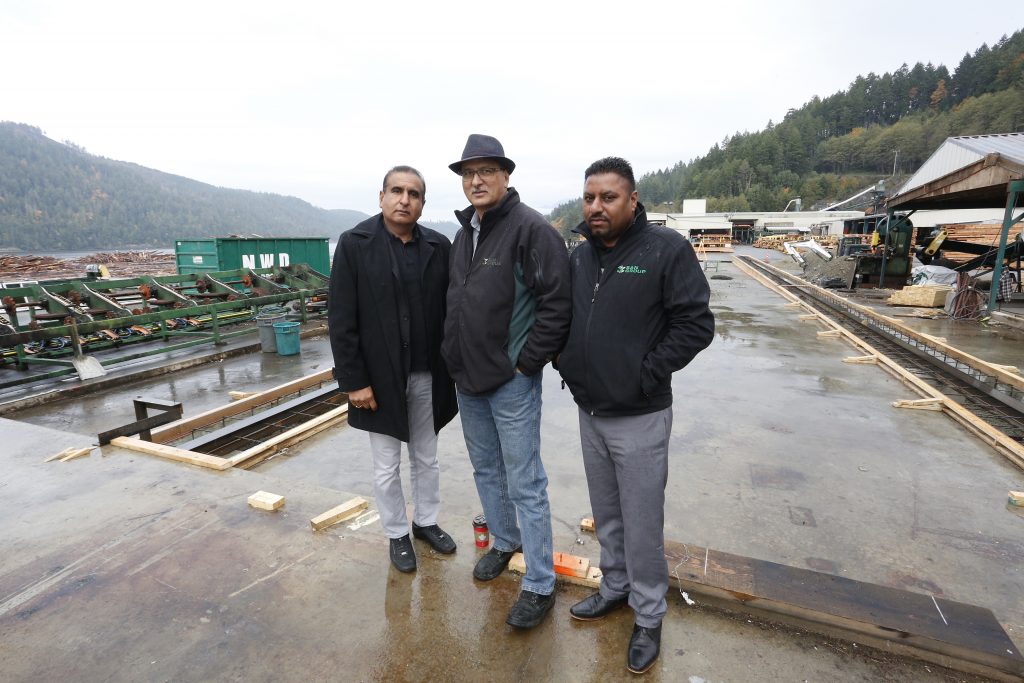 As the B.C. lumber industry closed out a dismal 2019, punctuated by holiday shutdowns, shift reductions and shuttered mills, a Langley, B.C.-based company rooted in remanufacturing finished the year with optimism.

Adding shifts and expanding its portfolio, San Group is in the midst of a $100-million project to reinvigorate the City of Port Alberni as a major player in the Canadian lumber industry.

San Group purchased a large-diameter sawmill from Coulson Forest Products (located just outside of urban Port Alberni) in 2017, and is spending millions on new equipment and construction to build a small-diameter mill and a remanufacturing facility nearby.

San Group’s CEO Kamal Sanghera plans for their Port Alberni project to be an example of the sort of thinking that he feels can revitalize B.C.’s lumber industry. But it requires an important shift in thought.

“With our natural resources, we should be a booming country,” he says in an interview with CFI at the site of their in-progress remanufacturing plant in Port Alberni next to Catalyst Paper – a paper mill now owned by Paper Excellence Canada.

But companies have become accustomed to getting a “fat cheque” for selling logs to the export market and not doing anything with them, he says.

“We go against the grain,” Sanghera says.

They do that by facing up to the problem that every business in the industry is dealing with: trees available to the industry are getting smaller and lumber companies are allowed to harvest fewer and fewer cubic meters. So, to survive, mills must find a way to do more with the available fibre.

That is what San Group is positioning itself to do in Port Alberni.

Since purchasing the Coulson mill, San Group has been busy making changes and adapting equipment to process smaller logs and a wider range of species.

While the Coulson mill specialized in processing large-diameter, high-value logs, San Group’s changes now allow it to process logs as small as 12 inches in diameter, down from a minimum of 18 inches. Also, where the Coulson mill had only been processing western red cedar, it now processes any available B.C. lumber species, from hemlock, balsam, Douglas fir, sitka spruce and yellow cedar. What’s more, the mill can switch from one species to another in a few hours, and routinely does. 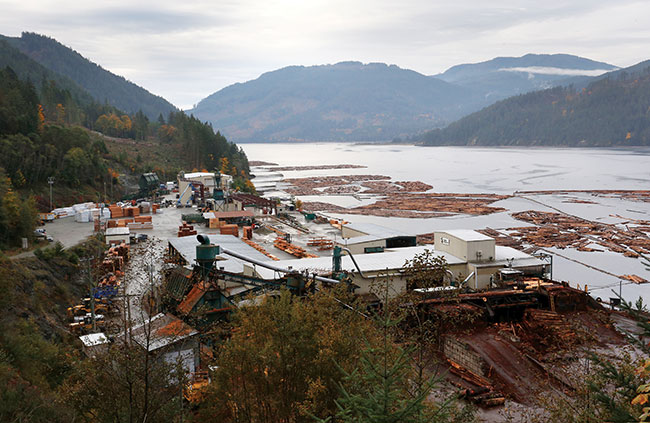 The Coulson Mill in Port Alberni, purchased by San Group in 2017, sits next to a deep-water port.

Otherwise, the Coulson sawmill follows a similar process to many other mills on B.C.’s coast, with logs first being dewatered and brought to the infeed, then sent through a debarker on the way to a headrig, explains San Group’s vice-president of business development, Bob Bortolin.

Lumber then goes through a gang saw, trimmer and grading, with final products ranging from 2×2 through to 6×20. After being wrapped, lumber is ready to be sent to world markets.

However, San Group is continuing to make changes to its Coulson mill, with some machinery being modified or replaced entirely. “A lot of things are in flux right now,” Bortolin says.

The mill currently runs three shifts with a maintenance crew on hand. It produces about 100 million board feet a year, and employs more than 250 people.

More pieces to the puzzle

San Group’s plans for Port Alberni extend far beyond their Coulson mill. An important factor in San Group’s success is being versatile, Sanghera says. Where other mills look to specialize, San Group aims to make use of as much fibre as possible.

The next piece in that puzzle is a second mill the company is building next to the Coulson mill. It will process smaller, lower-grade timber down to three inches in diameter. “An important factor to remember is that this line processes logs that are currently being left in the bush or chipped,” Bortolin says.

This HewSaw R200 line will see the logs go to a bucking line, Valon Kone debarker, scanner and then fed into the HewSaw. Lumber is then sorted by dimension in an automated 60-bin sorter and packaged for either further processing at the remanufacturing site or shipping to world markets.

While San Group hoped to have this mill cutting wood by the summer of 2019, community concern convinced the company to make a major change in its plans, which slowed progress.

This second mill was originally planned for a 25-acre site beside Catalyst Paper. After the community grew concerned over possible noise in nearby neighbourhoods, San Group chose to move construction of the mill to its Coulson site, and instead build the remanufacturing facility next to Catalyst.

In addition to providing new jobs and helping to lift the local economy, part of that is responding to and working with the community, he says. Where the sawmill may have created noise, the remanufacturing facility will not, with all machinery, except for kilns, being indoors.

Though the change did cost a lot of money, San Group intends to be a good community partner, Sanghera says.

A history in remanufacturing

The third piece of San Group’s $100 million-plus puzzle is the remanufacturing facility, which harkens back to the company’s roots.

San Group’s history in the lumber industry starts in 1979 with a small-lumber remanufacturing facility in Langley, B.C. It expanded into sawmill operations and lumber harvesting as a way to support manufacturing, Sanghera says.

Now, in addition to doing its own harvesting, the company supplements volume with trading, agreements with Island Timberlands, and also purchasing logs through BC Timber Sales and private sales.

In Port Alberni, the remanufacturing facility’s lumber will primarily come from the Coulson mill, where the fibre will be turned into a variety of manufactured products, from cross-laminated timber to tongue-and-groove clear engineered veneer. 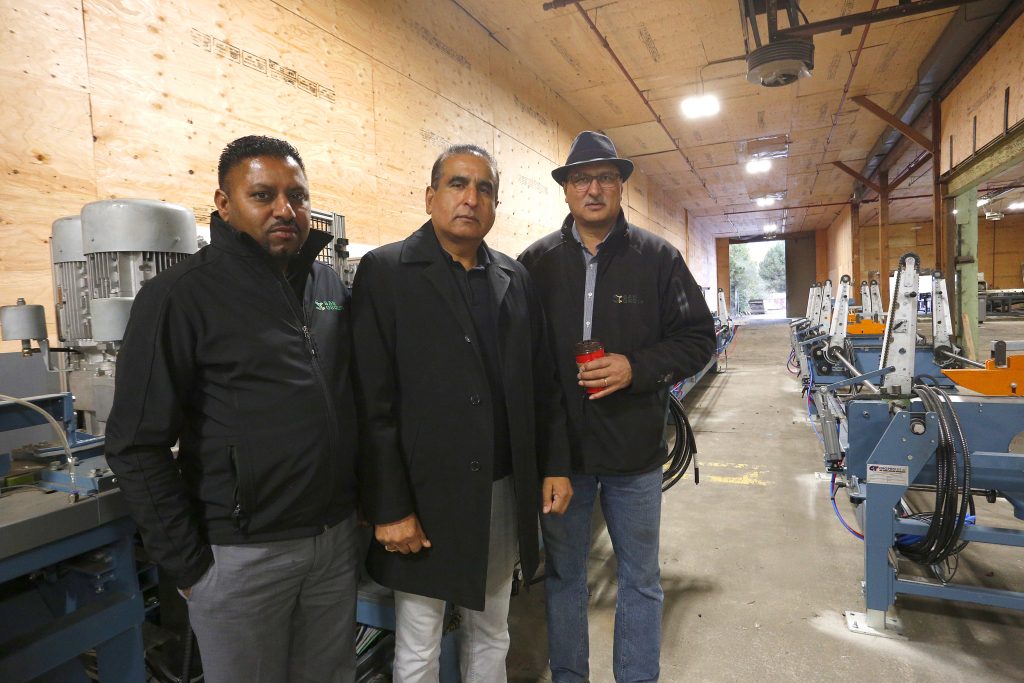 From left: San Group owners Paul Deol (vice-president, manufacturing), Kamal Sanghera (CEO) and Suki Sanghera (president) stand next to a Conception finger jointer – one of the machines that will fill San Group’s Port Alberni remanufacturing facility, where construction and testing was underway in mid-October.

The facility will include six dry kilns: two small specialty Porta Kilns from Ontario’s Innovated Control Systems, as well as larger Brunner Hildebrand kilns. The process planned for the facility will see a portion of the lumber conditioned and then sliced into face veneer for the engineered wood division. The veneer will then go through a Fezer Slicer and be processed through an Omeco veneer drier to bring down the moisture content before laminating.

Lumber will then run through a Microtec Goldeneye 502 Quality scanner, which utilizes multiple cameras as well as X-ray to size and locate each defect on the board, and optimize for the highest amount of useable lumber. The solution for the board is then sent to the high-speed chopsaw line, which produces the finger-jointed products.

Finger-joint blocks will then be sent to the Conception finger jointer. Then the finger-jointed lumber and veneer will be processed through one of two RF laminating lines.

Products include interior paneling, siding and soffits, and five Weinig moulders on site will be able to manufacture a number of standard and custom profiles, Bortolin says.

One of San Group’s project aims is to show how to get as much as they can out of the fibre they have, while being environmentally efficient.

Part of the location appeal for San Group is having Catalyst Paper as a neighbour. A deal between the two companies sees San Group purchase pulp logs from Catalyst, while waste fibre from the remanufacturing facility goes to Catalyst and will be used as hog fuel, Sanghera says.

In October, machine testing at the plant was conducted via generators, with Sanghera noting red tape and slow bureaucracy have been some of the challenges the company has had.

“We are working with BC Hydro and Fortis BC,” Sanghera says. “We are still waiting on some approvals on the environmental side… everything was sent to them almost eight months to a year ago. That’s why we’re almost a year behind… [but] those are the typical things anybody is going to have.”

Sanghera says he’s excited by some of the efficiencies the company has created in its remanufacturing plant. These include slicing veneer instead of cutting it; purchasing specialty, small dry kilns that save on energy by drying lower volumes of lumber in a smaller space; and a high-speed finger joint, scanning and chopping system. In addition, the proximity of the mills, manufacturing plant and Catalyst will reduce transportation costs and emissions.

The company also strives for efficiencies in its sales. By creating products that customers are asking for, San Group sells up to 90 per cent of its product before it’s cut.

With regards to reducing their carbon footprint and providing a value-added product, Sanghera says, “In reality, whatever the government, federal and provincial are saying, we are already doing.”

Sanghera, his brother and president of the company, Suki Sanghera, as well as the company’s third owner, Paul Deol, say their Port Alberni project is a result of learning from best practices in other countries, their shared commitment to the success of the Canadian lumber industry, and a desire to show communities, governments and the industry itself that better use can be made of B.C.’s lumber.

“Our approach is completely different and that’s why we’re keeping our head above water,” Sanghera says. He adds that, if a company like San Group (which holds no timber licenses and has to buy lumber on the open market) can make this work, why can’t tree farm license-holders work this way as well?

“Canada was built on manufacturing,” he says. But now, logs are being sent oversees to be processed and manufactured, then bought back by Canadian customers. He hopes to see manufacturing return to Canada.

Though processing costs may be lower elsewhere, San Group is managing to compete with advanced technology, know-how, product versatility and efficient use of fibre. The company is already looking to other B.C. communities where it can duplicate this project. Hopefully, Sanghera says, other companies will start doing the same.

A guiding philosophy for San Group is that survival isn’t only dependent on strength or intelligence, but also on adaptability to change. The company strives to learn from the past, live in the present and challenge the future.