Features Mills Sawmilling
All about cedar

March 31, 2017 - When many people think of Vancouver and coastal British Columbia, they think of bright blue waters on a backdrop of mountains, where the weather enjoys four complete seasons and everyone seems genuinely happy. Stepping onto the wood yard at Terminal Forest Products in Richmond, B.C., a stone’s throw from the heart of Vancouver, you get exactly that. 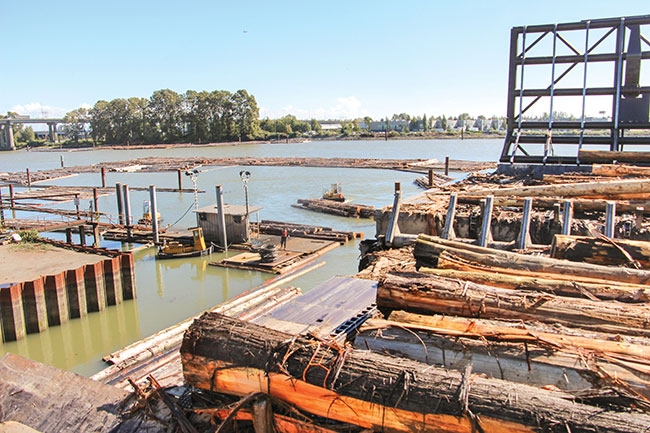 The mill is full of both vintage and state-of-the-art equipment and a seasoned workforce, but watching the tug boats push bundles of cedar logs out of the crystal clear cerulean river, you’d think you’d stepped into a movie. There’s something about the bundle-lift at Terminal Forest Products’ main mill that strikes an eye unlike any other wood yard with a regular log loader.

Terminal president and CEO Darcy Johal explains that because of the steep terrain on the coast, and prohibitive costs associated with pushing out roads so close to the water, it’s easier to fell logs into the water and “drag” them around to be scaled and processed.

Logging contractors package logs together and then tug boats push the bundles wherever they might be going. “As you get further up the coast, they are on log barges where it is open water,” Johal explains, “but in the inlets and on the river, everything just gets pushed around by tug boats.”

Terminal sorts and scales the majority of the logs it consumes at it two sawmills at their log sort yard on the Sunshine Coast.  It is one of the largest log sort yards on B.C.’s coast.

Once scaled, logs are rebundled and sent back into the water, heading for processing. At the main mill in Richmond, logs are punched into the inlet, and a wood yard worker disassembles the cables holding the bundles together – pushing them into the bundle-lift. As they are pulled out of the water, they immediately begin primary breakdown.

Scenery
Owned by the well-known British Columbian Johal family, with 94-year-old chairman Asa Johal coming into the mill every day, his son Darcy is the “go-to” owner when something arises in the mill. Terminal Forest Products had a humble beginning in 1962, on just three and a half acres.

Now, the 35-acre site cranks out 500 MBF each day. Larger cedar logs, with butt diameters of 24 to 40 inches are processed on an older headrig. Smaller stuff, typical of what is starting to come in as second-growth timber, is processed on a quad bandmill side. Affectionately named the small log side, these butt diameters start at about five inches.

From there, cants travel to a vintage gang saw. The gang saw, which was slated to be replaced during a capital improvement period over the Christmas holidays, wasn’t handling logs as well as Terminal would like.

“We’re always looking into how we can improve our mill. Looking at how to more efficiently handle the smaller diameter second growth logs. We have to adapt to what’s being supplied to us,” Johal adds. Optimil is supplying the new gang saw. Terminal also has a shop-built resaw line that it will process larger logs on.

After passing through the gang saw, lumber moves through a double arbour Optimil machine. One inch and shorts move along the green chain before the vintage sorter. Larger pieces go straight into the sorter.

Terminal does sell a portion of its production green, so not all lumber will travel to the five cinderblock conventional heat, double track, dry kilns. Depending on the product, lumber is dried to below 12 per cent moisture content on the industrial grades; decking and boards are dried to 16 per cent moisture or less.

Johal says that in the planer mill there are two main goals, finishing common and low grade lumber, and sorting. Terminal prides itself on sorting for industry grades and customer-specific subsorts. He adds that with one of Terminal’s other locations being the world’s largest cedar reman facility, it makes sense to sort out lumber than can be handled at that location – that’s where the majority of Terminal’s decking, siding and paneling work is done.

Boards not being sent to the secondary location are processed on a Stetson-Ross planer, which is a very good, reliable machine, he says.

When Asa Johal first got into the sawmill business in the 1960s, saw filing was contracted out. As the business began to grow, and the double arbor gang saw was installed, it became clear that saws needed to be filed in-house. Once the change was made to in-house, Johal has not looked back.

Bark and chips coming off the saws are barged and shipped as hog fuel via Terminal’s dry land log sorting facility.

Ninety per cent of what Terminal produces is sold into the U.S. market, and shipped by truck across the border.

Trade concerns
Being a Canadian company, selling softwood lumber in the U.S. market has garnered some attention in recent years – especially this year as the Softwood Lumber Agreement grace period expired and is in the process of renegotiation.

Ted Dergousoff, Terminal’s COO, says that since Terminal is a vertically integrated company, with over 40 years experience cutting Western red cedar and exporting it to the U.S., he has confidence that his existing long-standing customers will continue to purchase their products – as long as prices remain in line with log costs.

“It’s always changing. Log prices are very, very high now and that’s a challenge and the Softwood Lumber Agreement’s uncertainty is also a challenge,” he adds. “We’re confident once there is an agreement in place we will be able to adjust and adapt to be successful. The uncertainty in general causes everyone to pull in a little bit and be a touch more conservative – us included.”

Terminal is a little different than other Canadian softwood lumber exporters. “We don’t have any forest lands,” Dergousoff explains. Each log Terminal buys and processes is purchased from the open market – not the province. “So, the U.S. lumber coalition’s issues are with Canadian companies that have forest licenses and tenures that are administratively priced by the Crown and not by the open market. We’re not one of those.”

Terminal maintains that since its buyers purchase open market logs, and therefore do not get the alleged subsidy from the government for managing provincial lands, the softwood “fight” doesn’t directly involve them.

“But, we’re dragged into it, because we’re not able to take ourselves away from that group,” Dergousoff says. “Our government has not allowed us to step aside; we’re thrown into the mix. If there is a subsidy, and the U.S. does put on a duty, we’re treated like everyone else, as if we did receive some type of subsidy, when we did not.”

Terminal has grouped itself with other open market log buyers and secondary log processors. “We are small in number, we’re relatively small in volume, compared to the total, but we collectively feel that we shouldn’t be part of this. We’re trying to make sure our message is heard with the provincial, federal and even the U.S. government,” Dergousoff adds.

He commends the Canadian federal government and the U.S. Department of Commerce for allowing those Canadian companies who are not directly part of the softwood lumber dispute to file for an exclusion, which could remove those companies from any trade action.  Dergousoff adds, “It’s in the formative stages but as long as the discussion and government support from both sides continues there is a chance for the exclusion process to work.”

In the end though, he firmly believes that common sense will prevail. Customers want products made with quality materials that are fairly priced and delivered on time. “Whether it’s a U.S. manufacturer or Canadian, if it’s a fairly priced product and no one is being disadvantaged, then it’s
all good.”