Ontario’s logging roads are home to an independent and versatile breed of log transporters. Known as “self-loading truckers,” these professionals are generally characters in their own right, and most will talk your ear off if they get the chance. 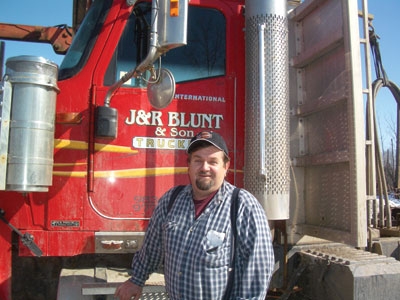 Reg Blunt of J&R Blunt Trucking is one of Ontario’s self loading truckers. Here he is pictured with one of his International trucks. Ontario’s logging roads are home to an independent and versatile breed of log transporters. Known as “self-loading truckers

Meet Reg Blunt of J&R Blunt Trucking in Pass Lake, Ontario. He fits the profile to a “T” and most people that know him will warn you, “any conversation with Reg is going to be a long one.” However, it’s also going to be a good one and if you want to know what’s going on in the forest industry in his part of the world, Blunt is your guy. Like many of his colleagues in this slowly disappearing profession, he spends a lot of time on mill sites and at logging operations, and he’s in the know.

But it’s not always about catching up on the latest news for Blunt. He and other self-loader operators spend much of their time working independently, and not always in the best of conditions. There’s no “snow days” for these guys. It’s a 4-season job that involves sitting on the loader’s seat between two trailers while being exposed to the -40 degree temperatures in the winter, or the scorching hot sunshine in the summer. Imagine adding in a little wind, a steady downpour of rain or hail on occasion, and washed out roads in the spring and fall and you start to get an idea of what Blunt’s job might be like. Top that off with the fact that he is a self-employed contractor, meaning he has to deal with any issues or problems on his own, and you might begin to wonder why he does it. Basically, Blunt gets paid when he delivers a load. If he gets stuck, breaks down, or runs into any other problems along the way, he is on his own. Not only that, he often has to find the right log pile when no-one is around and figure out the easiest way to get in and out of the area and turn around a huge loaded log truck on a very narrow logging road. Blunt’s equipment choice and configuration of a “tandem and a pup” trailer is often his saving grace in tight situations as he has the ability to drop his pup trailer before going in, and pick it up on the way out.

On His Own
In addition to the day-to-day issues of operating the truck and getting the logs to the mill, Blunt also has to do his own marketing, which means selling his driving and loading skills to prospective customers, follow up with existing clients to make sure he gets paid for delivered logs, and keeping his equipment in top operating condition.

His reputation also helps him secure business. His customers know when they call Blunt for a pick-up and delivery, it happens. He covers an area almost the size of France, and hauls wood between White River, Ont. and the Manitoba border. “And I know every damn road in between,” he says.

For equipment, Blunt primarily operates an International Pay-Star 5600 series truck from C.C Poulin in Thunder Bay, Ont. that is powered by a 525 HP Cummins engine. His trailer is made by Timmins Trailers and his self-loading rig grapple equipment is manufactured by Serco of Two Harbors, Minn. He only uses Internationals and has a second one powered by a 475 HP Cummins engine.

With over 32 years in this business Blunt has been witness to a lot of changes in both logging and trucking. What has not changed over the years is the need for his type of truck. He explains that in the logging business loaders are constantly being shuffled around, which means single or small loads are often left behind. This is where the self-loading trucker plays into the scenario. “There is always a load that someone wants moved, and because I am able to do this in one process, I am an economical option for the customer,” Blunt concludes.