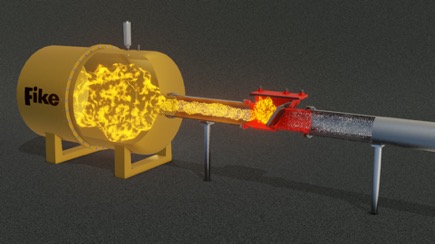 Data proves explosion isolation flap valves are not always tested under real-world conditions, and as a result, many flap valves on the market won’t function as certified.

Recent test data gathered from Fike Corporation’s Remote Testing Facility has empirically proven that potential performance problems exist with many ATEX-certified explosion isolation flap valves, which are currently available for purchase and even installed in many Canadian facilities.

These flap valves technically comply with NFPA 69, which states that all explosion isolation flap valves must be third-party tested and certified. However, all flap valves sold in Canada have been tested to EN 16447 – the testing standard that Fike has proven does not accurately represent real-world conditions which may be experienced by a flap valve during a deflagration.

Many of these flap valves are certified to protect against pressures for which they were not accurately tested, as seen in the following information.

“Protected zone pipelines” must be included

While nearly all flap valves in the field are installed between two pipelines, EN 16447 does not explicitly require the inclusion of a “protected zone pipeline” during the testing of flap valves, whereas all industrial facilities will have piping on both sides of the valve, including the protective zone.

Without including the protected zone pipeline in certification testing, EN 16447-certified flap valves may not experience the same pressures and conditions during testing as they will when installed in an industrial or manufacturing process. Consequently, the pressures and oscillations generated in an actual installation will likely be significantly more severe than those generated during testing, leading to mechanical damage and isolation failure at deflagration conditions far below the certified ratings.

Fike conducted a number of tests to prove these points. Below are some of our findings. 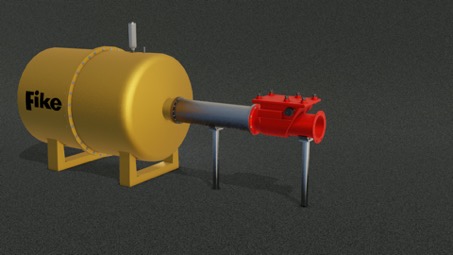 As currently allowed by EN 16447, this test did not include the pipeline on the protected zone of the process, but rather left the protected side of the valve exposed to atmosphere.

According to our test data: 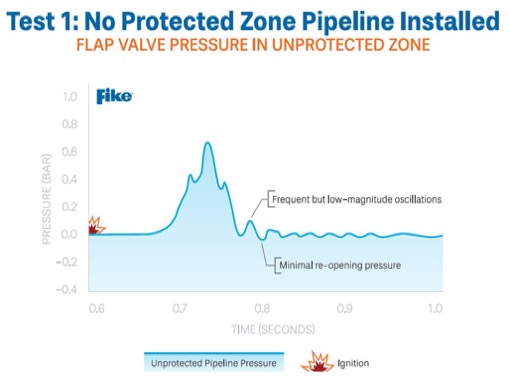 Without the inclusion of the protected zone pipeline, the data shows that the flap valve experiences non-concerning oscillations and pressure differentials, resulting in successful flame isolation.

Fike then conducted a second set of tests that included the pipeline in the “protected” zone of the process, which is representative of nearly all real-world installations. All other variables remained the same as previous tests that lacked the protected zone pipeline. 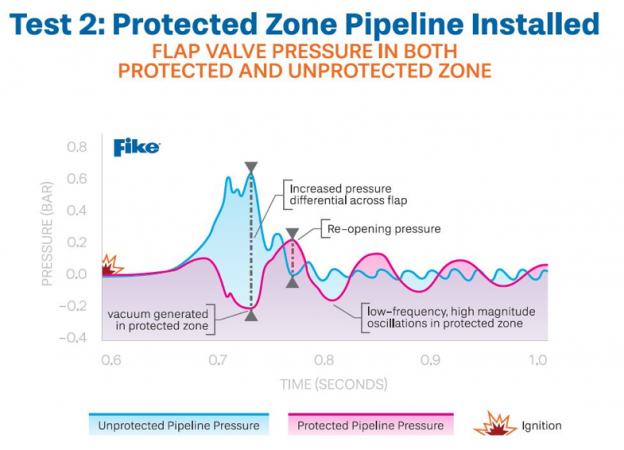 The test data empirically proves the necessity of the protected zone pipeline to accurately simulate the conditions that a flap valve will experience during a deflagration in the intended application. Therefore, any testing that does not include the protected zone pipeline has likely resulted in the certification and installation of flap valves that may fail when exposed to real-world conditions.

1) How flap valves are held open to simulate the closing.

2) Test vessels had holes open to the atmosphere instead of equipped with an explosion vent similar to what would be present in real world conditions.

Preventable loss of life in the industrial workplace is a never-ending problem that Fike strives to eradicate with its comprehensive engineering, manufacturing and, in this case, testing capabilities.

Flap valve owners have no reason to believe otherwise.

In May 2020, Fike presented these findings to the EN standards committee and is currently working with them to update the testing standards, which will ultimately improve the collective understanding of the forces these flap valves can actually endure during an explosive event.

It is Fike’s official position that the EN 16447 standard should be updated, and flap valves tested with the aforementioned problems should either be re-tested, de-rated or replaced with another explosion isolation device.