July 12, 2016 – The mammoth Ark Encounter project is being recognized as the world’s largest freestanding timber frame structure, using a total of 3.1 million board feet of timber in its construction. 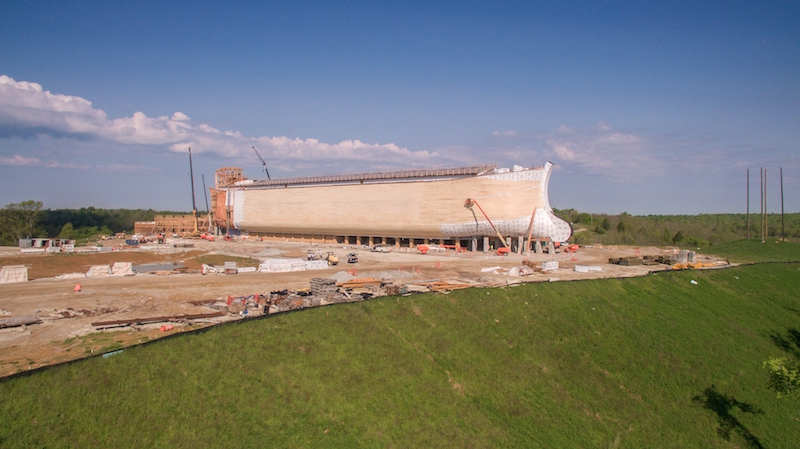 The biblically scaled Ark is one and a half football fields long and features three levels of exhibits, with a 1,600-seat restaurant being prepped on the top deck. The Ark’s maximum capacity is 10,000 people, however once it opens to the public, organizers plan to limit capacity to 3,000 people inside at any one time.

The $100 million project took just over one and a half years to build with the timber frame construction designed and supplied by Colorado Timberframe in Lafayette, Colo. Just over 1.2 million board feet of square timbers were required for the timber frame itself.

“For our massive project, we needed a special partner,” said Mark Looy of the Ark Encounter. “Colorado Timberframe was the only company that had a CNC machine large enough to handle our design specs for our timbers. And it was a large enough company to handle our volume.”

To meet the construction deadlines, Colorado Timberframe hired additional help, and transitioned to a three-shift work schedule for six days a week for an entire year. Twenty-five employees worked in the workshop just outside of Denver, while 10 more were on site to install the timber frame project in Kentucky. Seventy-five Amish craftsmen were also employed by the main construction contractor.

“We had the capability of doing this entire project, as we have recently upgraded our equipment,” said Keenan Tompkins, owner of Colorado Timberframe. “We were the only company that can do the sizes of the timbers that they had, and actually fabricate all the timbers on the machines.” In addition to more staff, Tompkins said that several machines were vital to fulfilling the unique orders and meeting the tight construction deadlines.

An extended personal sawmill manufactured by Indiana-based Wood-Mizer Sawmills was used to resize rough-sawn 24” x 24” beams of up to 40 feet in length to the exact dimensions required for the complex structure. The LT15 model sawmill used for the project is among the smallest bandmills Wood-Mizer offers – the standard model fits neatly into the bed of a pickup truck.

“Fifty per cent of the timber had to be resized,” Tompkins said. “So that’s where we really worked the Wood-Mizer for a year. We had one full-time guy resizing timbers for the Ark project.”

“Then the timber went through the K2I Hundegger CNC machine,” Tompkins added. “We have a four foot wide track, and it can do four foot wide to up to 20 inches tall, and 60 feet long. It does all the mortise and tenon joints, as well as drillings and slot cuts, and any kind of recesses or notches that the timbers need to accommodate either the wood connections or the steel plates.”

One of the most impressive timber aspects of the ark are the 50-foot tall logs that line the centre, many of which are three feet in diameter at the base. Thirty per cent of these logs are reclaimed Engelmann spruce that had been killed by invasive beetles, and were standing dead.

“We tried to use as much reclaimed timber as possible,” Tompkins said. “We made a deliberate and concentrated effort to incorporate as many of those reclaimed logs as possible.”

“Wood is such a versatile product,” Tompkins added. “If you look back through history, there are plenty of examples of extremely large structures, some of which are even still standing today. So it’s kind of going back to incorporating and using that, but applying it in a modern context and having it meet the modern engineering standards that we have today.”

The Ark Encounter was opened to the public on July 7 in Williamstown, Kentucky. More than one million people are expected to visit during its first year in operation.