June 13, 2014 - Forestry equipment manufacturers have introduced a number of innovations, focused on the introduction of enhanced machine control systems. The data collected helps contractors understand productivity, downtime and additional challenging conditions that impact the daily cut, and as a result, the company’s bottom line.

When John Deere introduced TimberLink in 2005, the company hoped its newest innovation would prove to identify the drivers affecting the productivity of the machine. The company collected a large amount of data from the TimberLink system, filtering and aggregating the data, as well as eliminating external variables, to understand where productivity was being lost.

“Overall, that data has shown up to a 40 per cent difference in productivity between an average operator and a very good operator,” says Richard Lawler, director of forest engineering for John Deere. “That allowed us to understand that operator ability had a much greater impact on productivity than we had originally thought.”

That same data drove John Deere to the development of a system that would help to supplement skill level with technology to increase productivity while narrowing the gap between average operators and the best operators.

In July of 2012, John Deere officially introduced the Rapid Cycle System for boom operation, an option for its newly-released 900K series of tracked feller bunchers. The RCS included automating both the boom and cutting head motions as well as harvesting arm cycling. The series represents John Deere’s most powerful line of feller bunchers, featuring a 9.0L, 300-330hp engine. Canadians got their first look at the 900K series at DEMO 2012 in September of 2012 in Québec.

The RCS came in around the same time as two other innovations that were also incorporated into the 900K series: automatic head leveling and automatic head release. Both of these innovations compliment the RCS in improving the cutting cycle for the operator.

The Results
After 18 months in the field, the company has started to observe overall trends in the performance, and usage, of the Rapid Cycle System.

“One of the questions we had was: do the experienced operators still use the technology or do they turn it off?” said Lawler. “The feedback we have received from our Canadian customers is that they are using it once they have tried it.”

The data collected has showed an eight-to-ten per cent improvement in productivity, meeting the company’s expectations.

The secondary benefit of the Rapid Cycle System has been how quickly unfamiliar operators have been able to learn the system. Operators have been getting up-to-speed with the 900K system, in part, because of the introduction of the RCS, providing a cost-savings for the contractor in the downtime needed for operator training.

Even though RCS has not been in use that long in Canadian forests, the next step in John Deere’s evolution of machine control technology has already been introduced.

At Elmia Wood last June in Sweden, the company announced the introduction of Intelligent Boom Control; this new technology, which has been introduced in new models of forwarders, takes RCS one step further by giving the operator control over the boom tip, rather than operation of the individual boom joint movements. The system creates less turning parameters in a more durable and secure system than the previous technology.

The evolution of machine control technology is providing contractors with new opportunities to improve operation in the forest and improve the bottom line for the company. 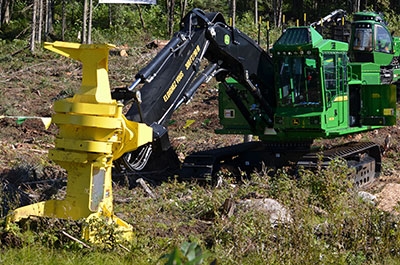