August 13, 2015 - Understanding the needs, footprint and budget are the three key factors for the construction of a brand new sawmill. When officials at Irving understood the reality of each of those three factors, they knew that something completely different would be necessary. 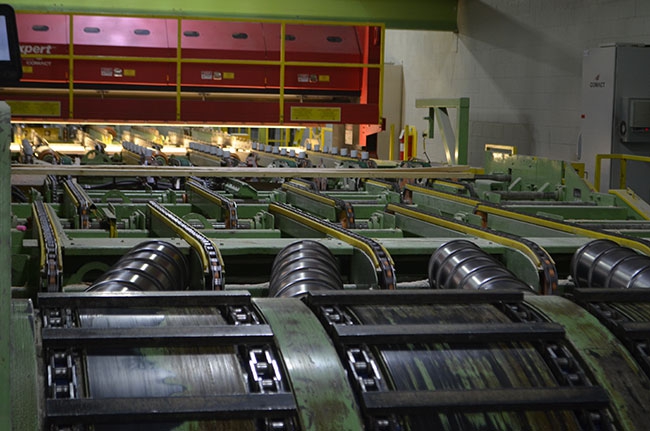 The GradExpert system from Comact is part of the infrastructure that helps the line process both green and finished lumber on the same line. Understanding the needs

When company officials began contacting suppliers to discuss design and equipment solutions for the new mill, one particular solution stood out.

“Comact proposed this innovative idea to process the dry and dressed lumber with rough, green lumber,” says Jérôme Pelletier, general manager of J.D. Irving Limited’s sawmill division. “Therefore, we only need one trim line, fully optimized, which reduced the capital cost. That’s how we got to the design that we have today.”

For Comact, the idea of creating a mill that included both dry, dressed lumber and green lumber on the same line was years in the making.

“We talked about this idea of doing a combination sawmill and planer mill in the same building, the same process,” says Eric Michaud, senior vice-president of business development for Comact. “We came up with this idea of using a GradExpert to optimize the trim in the sawmill and, at the same time, scanning the dressed and dry wood from the planer and grade all of the boards on the same line.”

The idea had originally been investigated in the mid-2000s, with a couple of potential buyers in Western Canada interested in the hybrid mill design. But Michaud explained that shortly afterwards the recession hit, the ability to invest was gone, so the idea was shelved for the time being. When Irving Forest Products Inc. (IFP) contacted them about ideas for Ashland, the hybrid design was the perfect solution. The result, for Comact, is the first installation of this kind in the company’s history.

Complimenting the cost-saving measure presented by Comact was an opportunity to incorporate assets in the region located at mills that were no longer in operation.

History in Ashland
Three years ago, the IFP sawmill site in the forests north of Ashland, Maine stood silent. The site, purchased from Bowater in 1999, had been shuttered since 2008 as a lack of big wood and challenging market conditions meant the mill was no longer financially viable.

But Irving Woodlands in Maine accounts for 70 per cent of the trees planted in the state. This combined with the sustainable forest management of the Woodlands team has resulted in continued growth of wood fibre. This, combined with increasing demand for spruce lumber made it more and more evident that the shuttered old mill could see a renewed future and buzz with the sound of lumber production once again.

“We knew that the inventory of trees was growing, and we knew that there would be enough volume available to justify another sawline in the region,” says Pelletier. “We had a good industrial site and several good customers for lumber in the U.S. and Canada. We had a customer for our chips and we wanted to grow our business. So we thought that Ashland was our best option.”

The original sawmill was equipped to handle big wood, primarily stems ranging from six inches to 34 inches in diameter. The original debarker was fitted to fit up to 36-inch wood.

But Maine had been hit hard in the 1970s and 1980s by the spruce beetle, and the trees available for the mill by the time Irving purchased it was not the same as the wood size that the mill had originally been built for. So when the team at IFP decided that the market conditions and fibre availability were favourable for restarting operations in Ashland, they understood that the new mill would have to look much different than its predecessor.

To begin the process, the company had to establish the real fibre availability in the region based on the development of trees on the lands the company owns and the sustainability of the annual cut.

“We knew that we were limited in terms of the size of the mill that we could build in terms of volume,” says Pelletier. “The forest is growing, but we don’t want to overcut the forest. We know that there is about 100 million board feet of fibre available (annually) in the area, so we started with that.”

IFP officials began exacting a plan for a mill that could saw, dry and dress 100 million board feet on an annual basis. They knew that the log size would primarily be five to six inches in diameter, and they wanted a one-pass machine that was efficient, fully-automated, featuring up-to-date optimization equipment and a simplistic design to reduce labour and maintenance costs.

“We were also limited in the capital that we wanted to invest,” says Pelletier. “To start with an old site, we had to remove all of the old equipment that we had there. We had to add kilns because the kilns on site were not good anymore. We had to also relocate two boilers to generate enough steam to look after our energy requirements.”

Sawmill operations
The desire to incorporate a key element of the original mill posed the first challenge during the construction of the new mill. The existing site had a hot pond in place that needed to be part of the new design for two reasons: the cold temperatures in Ashland, and the need for minimal bark on the processed wood.

The chips produced during lumber production at Ashland are sent to Irving Paper in Saint John, N.B. “In order to produce a high-quality paper, you need a very low percentage of bark in the chips,” explains Pelletier. “A hot pond becomes very key to reduce your percentage of bark.”

The elevation of the pond posed a challenge for making sure that the step feeder, in-feed system and debarkers were at a height that would maximize efficiency on the front end of the mill.

“It took us a while to figure out how we were going to build it and, even after we installed all of the equipment, we had to tweak certain areas in order to be productive.”

A Liebherr 944 material handler feeds a log mix of 50 per cent spruce and 50 per cent fir to the hot ponds. The Novilco feeder moves the logs through to the debarker, which was overhauled and upgraded by DK Spec for the new operation. The bark is used as fuel for both the boilers and the kilns. Log sorting is a ScanMeg scanning application developed internally by the engineering team.

One of the first things you notice as the logs drop into one of the four bins is the presence of mainly 12-foot lengths. The Ashland mill is the only one of Irving’s six spruce mills to produce 12-foot lumber. Prior to construction, the company recognized its own shortage of 12-foot lumber available to its customers, and built Ashland with the capacity to remedy that issue.

Comact provided the bulk of the sawline and planer line equipment, starting with four sorting bins and wave feeders for three lengths of wood. The DDM line with PLC controls are also from Comact, with an Access Communications camera system providing visuals of the line’s 240 logs/minute performance.

The trimmer line and sorter line are Comact equipment, with modifications made to some of the existing decks also incorporated. The original decks were built for 16-foot lengths, which were reduced to 12-foot lengths during the installation.

There are no real optical differences to the bulk of the Comact line, as the GradExpert provides the necessary capability for sorting both green and dried lumber. The boards are sorted into the Comact 75-bin sorter. The line has two stackers and one sorter, with a pair of Carbotech stackers. Species sorting for rough green lumber is done with a Saptek (Autolog) located at the lumber sorter infeed. There is also a Samuel labelling system attached to the line, which marks the dried boards specifically designated for a particular customer.

At the end of the Comact’s compact-design mill is the planer mill, housed in its own structure inside the confines of the line. The planer infeed was also specifically chosen based on the size, design and demand of the mill. The Yates planer installed keeps throughput at a high rate, matching the 230,000bft per shift demand that is that Ashland originally commanded, pushed up to 250,000 for the summer months.

The GradExpert system from Comact is part of the infrastructure that helps the line process both green and finished lumber on the same line.

Logging demands
Keeping up with production demands at Ashland means ensuring that Irving has enough harvesting operations in place. There is no shortage of wood for the company, as they represent Maine’s largest landowner with over one million acres under its ownership in the state. The company is constantly working to recruit operators for harvesters in the region, a challenge for sawmill companies coast to coast. But the team at Irving is doing things differently in a concentrated effort to build long-term relationships with harvesting operations throughout the state. The company offers a co-sign system, a system where young equipment operators that show strong learning and leadership skills can receive private training, as well as the chance to have the company co-sign on the purchase of a harvester or hauling truck. That has been the model that has been successful for IFP in recruiting young professionals into its workforce. It is a very risky proposition, co-signing purchases of equipment worth hundreds of thousand of dollars. But the program has been very rewarding thus far, with success stories throughout Maine, New Brunswick and Nova Scotia.

In addition to its private wood supply, IFP is also a major hog buyer in northern Maine. They buy from both small and large private land owners.

Ashland itself is a testament to the work IFP has done in recruiting young workers. Of the 70 staff at the mill operations, over 50 per cent are under the age of 40. Many of the millwrights and electricians are even younger, with most being under the age of 25.

“We’re putting young people to work in a traditional business,” says Pelletier. “The new technology makes it attractive to the younger people.” This next generation or workers will be the driving force behind the mill meeting its annual production targets as spruce demand continues to strengthen as the market recovers. Currently the company ships spruce from its six spruce mills as far west as Ontario and straight down the east coast all the way to Florida.

Next steps
Beyond working towards its shift goal of 250,000bft per 10-hour shift, mill officials see a need to improve consistency in order to optimize operations at Ashland. Two years ago, no one was on the Ashland site. Many of the staff, including skilled trades and maintenance crew, had never seen the inside of a sawmill. As the new team becomes comfortable with the demands of the mill, efficiency and consistency can be improved as expertise grows. With a strong fibre supply through intelligent forest management, a young skilled workforce and growing markets for its products, Irving’s newest sawmill will soon be one of the strongest and safest in its entire operation.