Features Mills Q & A Sawmilling Women in Forestry
At home in the mill: Q&A with sawmill supervisor Estelle Setterland 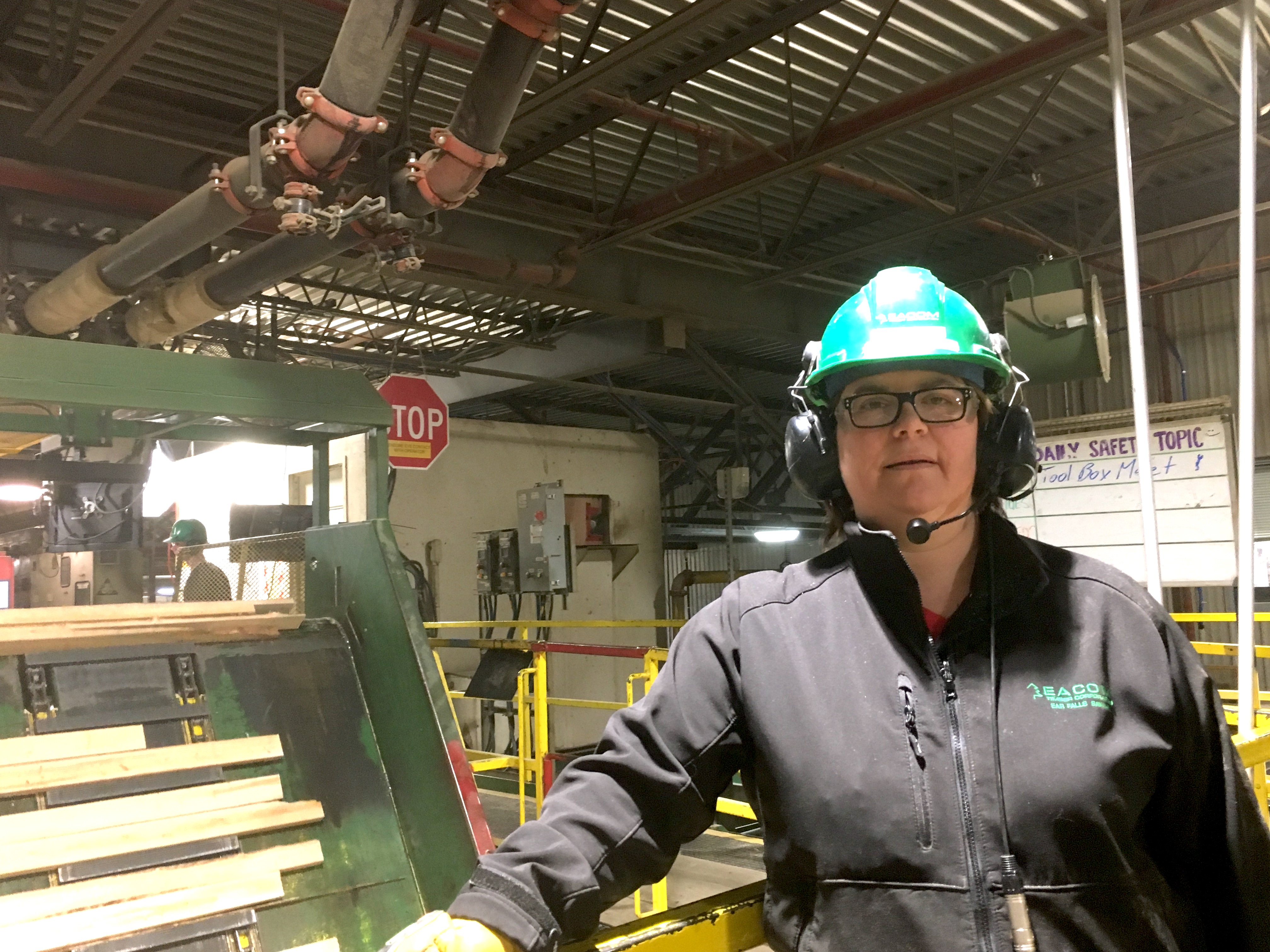 Estelle Setterland is the sawmill supervisor at EACOM’s Ear Falls mill in northwestern Ontario. Starting out as a manual grader in the planer mill, Estelle worked her way up on the production line into a supervisory role at the sawmill. Estelle says she learned to work smarter, not harder, to earn an excellent reputation in traditionally male production roles.

CFI: When did you begin your career in the forest products industry?

I’ve been with EACOM about three and a half years but I’ve been in the sawmill industry since 1998. I started out with Avenor in Ear Falls, in the planer mill. It’s changed companies a few times. It was Avenor and then Weyerhaeuser, then Domtar and now EACOM.

I was living in Kenora, Ontario, at the time and a friend of mine saw an ad in the paper for operators at the new planer mill and she said, ‘We should try out for this.’ We both put our names in and we went for interviews. We had to write an aptitude test. There were probably a couple hundred people writing the test. We both passed and we both got in. What are the chances of that!

CFI: Was it unusual for women to be applying for these jobs?

There were probably about 10 of us applying out of 150, so the minority for sure. I grew up with four brothers and I was the only girl on my street so I was always a tomboy kind of girl. I had worked in road construction before that so it didn’t really faze me at all. I always thought I could do anything a man could do.

They were looking for lumber graders at first because no one wanted to do it; it was the old way where you had to turn all the 2x4s by hand so it was a really physically demanding job. Then they offered $1.50 extra an hour for that job so of course I put my hand up. So I started out as a lumber grader. It was pretty demanding on your hands for sure. There were a lot of injuries back then for some people, but I was fine. I did that for five years.

In 2003 I bid on a job on the canter lines. The job on the canter lines is traditionally a man’s job. It’s really physically demanding. You’re throwing around logs, lifting cants. But they picked me. I was so thrilled. I couldn’t believe they picked me, when I was probably the only girl who applied. The boss said to me, ‘You have a really good reputation and I picked you because I know you can do the job. You get paid the same as me so I expect you to do the same as me.’ And of course I had no other thought. Of course I was going to do the same as everyone else.

There were a few sceptical people at first but I ended up working a lot smarter. I had to troubleshoot in different ways than the men.

There are a lot of things we do to this day on the canter line that I figured out how to do in an easier way. I would look at a jam and figure out an easier way to do it instead of using brute force.

I did that up to 2009 when we all got laid off while working for Domtar. I worked in the mining industry for several years and then they opened the sawmill again and I went back as a sawmill supervisor. I’m in charge of 19 people now.

CFI: What is it you like about the sawmill industry?

I like the challenges. Anything can change your day, from weather to machine breakdowns to how many people you have on shift that day. I’ve been here for so long it’s a part of me now. It’s what I know and I know it so well.

It’s a proven fact that women are better machine operators. They take better care of their machines. For example, the truckers underground in the mining industry here are becoming all women.

CFI: What are some challenges you ran into or you see others facing in the industry?

I think it’s difficult to balance family and work life. We actually have quite a few husband and wife teams who work here, and we try and accommodate them. If they want to be on the same shift we do that. A lot of them want to be on opposite shifts so one of them is always home with the kids. Companies should be flexible to that. Families are some of your most loyal employees.

CFI: Any advice to share to young women considering a career at the sawmill?

Don’t take no for an answer, especially from somebody who doesn’t have the authority to give you a yes in the first place. That’s the way I look at it.

Jump in. The opportunities are there, especially with EACOM. I would say we were probably around four per cent female when I first started. Now we’re at 25 per cent women at the Ear Falls sawmill. We’re just hiring more girls, they’re just good operators and they can do anything a guy can do. And I believe you can train anybody, really.

Always work smart, and not hard. I see people struggling on the floor and I’ll say just stop and think about it, and be smart about it.

This post is part of CFI, Pulp & Paper Canada and Canadian Biomass’ Women in Forestry project celebrating International Women’s Day on March 8. Find more content here and follow on social media with the hashtag #WomeninForestry as well as #IWD2020 and #EachforEqual.
Print this page