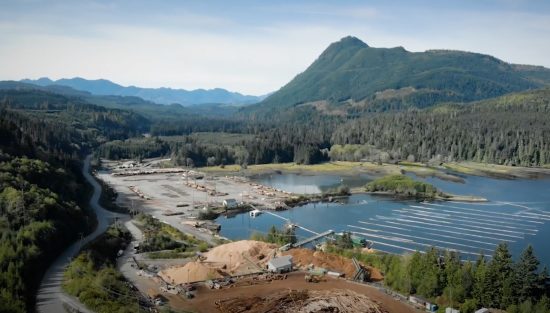 Atli Chip LP, a wood chipping facility in Beaver Cove, B.C., majority owned by the ‘Namgis First Nation, is celebrating an expansion of the facility thanks in part to federal government support.

The facility debarks and chips larger logs and wood chunks with the goal of providing pulp chips to mills on Vancouver Island and B.C.’s Lower Mainland, as well as biomass from wood harvested in the ‘Namgis traditional territory and adjacent Forest Resources Licenses.

“I would like to congratulate the ‘Namgis First Nation on the successful expansion of their sustainable operations at Atli Chip LP,” Natural Resources Minister Jonathan Wilkinson said in a government news release. “This innovative development will create new opportunities and sustainable jobs while demonstrating Indigenous leadership in the sector. The Government of Canada is pleased to support this important work.”

Atli Resources LP – a forest company 100 per cent owned by the ‘Namgis First Nation – owns the majority of Atli Chip, with Wahkash Contracting and Paper Excellence owning minority stakes in the chipping company.

“The acquisition of Atli Chip Plant is a huge win for Atli Resources Limited Partnership and the North Island as a whole,” Doug Mosher, CEO of Atli Resources LP. “It will generate revenue to support other initiatives of Atli Resources LP and ultimately its owner, the ‘Namgis Nation, increase the utilization of waste wood fibre, provide jobs in the community and the chip plant, and create training opportunities to build capacity in forest operations and wood processing on Northern Vancouver Island.”

The chipping company is undergoing a study with FPInnovations to improve the facility’s capacity and efficiencies, including their ability to process forest harvest residue feedstocks.

FPInnovations CEO Stéphane Renou said in the release that FPInnovations is committed to supporting the Nation in growing the business. “Atli Chip LP’s dedication to adding value derived from a limited resource, enhancing the usage of logging residues and contributing to the local economy should be an inspiration to anyone wishing to start a forestry-based business,” he said.