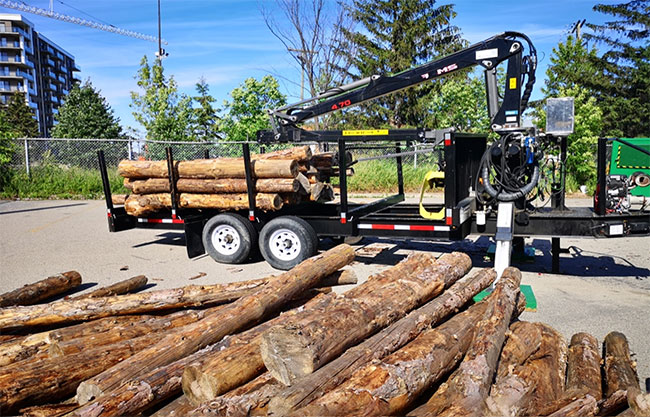 FPInnovations is testing the ability of the Palm 4.7 crane on a trailer to autonomously detect and move logs. Photo courtesy FPInnovations.

The idea of a machine being able to autonomously harvest and move logs in the forest may seem like a far-fetched idea that is decades away. But, autonomous forestry machinery may be closer than we think. FPInnovations has been developing an autonomous log loader that is now capable of detecting and handling logs on the ground.

The project is part of FPInnovations’ Forestry 4.0 initiative, through which the organization is developing and testing new technology to help address three main challenges: the labour shortage facing the forest industry, inadequate connectivity in remote forestry operations, and the extremely variable operating environments operators work in.

The main goal behind developing an autonomous log loader is to address the first challenge: the labour shortage, Sylvain Volpé, forestry manager at FPInnovations, tells CFI.

“Recruiting new operators in the industry is difficult. The average age is quite high, so transferring the skillsets is difficult. So, we’re looking at how we can start to automate some functions in the supply chain to make the job easier, and then eventually, as we evolve with the technology, make it fully automated,” he explains.

Starting from scratch
But, the team at FPInnovations had to start from scratch with this project, building a new lab in the parking lot of FPInnovation’s Pointe-Claire, Que., facility last summer. They bought a trailer with a Palm 4.7 crane on it and built a control centre to remotely control it, Patrick Levesque, the technical lead on the project, says.

Rather than using a skidder or forwarder, they chose to develop the technology on the trailer and crane because “we needed a lab-scale, simple piece of equipment,” Volpé explains.

The crane was modified to meet the team’s needs – manual valves were changed to electronic ones and sensors were added to provide feedback to the control centre.

“On every joint, we put a rotary encoder that measures the angle between two links, so we can measure the angular distance and the speed,” Levesque says.

The team developed vision and control algorithms that decode information from the sensors so the machine knows where to move and can detect logs on the ground. They added a programmable logic controller (PLC) to the trailer to execute the motion sequence as directed by the algorithm.

“The PLC has all of the PID algorithm controls, which sends information to the valves, and the valves control the oil flow and the hydraulic cylinders. We then get feedback from the sensors telling us where the crane is,” Levesque explains.

So far, the autonomous log loader has been able to successfully detect a single log on the ground (on asphalt), grab it and put it in the trailer. This puts the technology at Technology Readiness Level (TLR) three, experimental proof of concept, Volpé says.

Overcoming challenges
But, the team had to overcome several issues to get to this point.

“One challenge we had was to be able to detect the log with a 3D stereo camera. The light condition can change based on the weather. So, last year, we had some difficulties detecting a log in a reliable way,” Levesque shares.

“There’s definitely been many challenges, but what we’ve come to realize this year is the controls aspect of the crane is fairly straightforward – we’re good with this,” Volpé adds. “But, there are challenges with the vision aspect of detecting the log and seeing how the back of the trailer fills up as you’re loading it, and dealing with exceptions such as a crooked log on the pile.”

Getting the machine to make decisions when it comes to which order to load or unload the logs is also difficult.

But, Levesque and Volpé are confident that they will be able to overcome those challenges. They are looking to hire a robotics engineer to add vision expertise to their team to help improve this aspect.

In the meantime, they have begun trying to use the log loader to detect and grab a pile of logs, rather than just one log. This would bring the technology to TLR four, meaning it’s validated at the lab-scale.

“The grasping technique is going to be more difficult – figuring out how to grab one, two, three logs together and maximize the volume inside the grapple and move it to the basket or another location,” Levesque says.

They are also looking at improving the crane’s speed when loading and unloading logs.

“Something we learned last year is we need a more sophisticated algorithm for the motion control,” Levesque says. “Last year, the motion was stop-and-go; it would wait for new instructions. That’s something I’d like to improve this year, to plan in advance what the next move will be and be faster.”

However, the faster the crane moves, the less fluid it is. A good algorithm is required to eliminate jerkiness in the motion.

“It’s one thing to automate a process, but it’s another challenge to be productive and do it in a safe manner,” Volpé adds.

Next steps
Moving forward, FPInnovations is looking to partner with their forest members and equipment manufacturers on the project.

Next year, the technology will be tested in a mill yard, which will allow the technology to be tested in an operational setting. In two years, the team hopes to test the autonomous log loader in the forest. This will bring its own set of unique challenges, the most obvious being that the machinery will need to work in an unstructured environment.

“That’s why we’re starting at the lab-scale where the terrain is known, it’s fairly simple,” Volpé says. “Then, we’re moving to more difficult terrain. So, next year in the yard, it will be something else; in the forest, something completely different. You might be in areas where GPS is poor quality and you’re not connected to the LTE network, so how do you automate processes when you’re really remote and there’s no access?”

Eventually, FPInnovations will look at using the technology in other forestry equipment, such as forwarders and skidders.

However, the potential impact of autonomous equipment, such as this log loader, on operational costs is not yet known.

“If you replace an operator, that’s one thing. But, what’s the cost of automating the loader? What’s the efficiency of it? Are you dropping productivity by a quarter?” Volpé asks. “We’re still de-risking the technology for the automated loader. We see it as an easy fit to scale up our lab technology that we’ve developed, but moving towards something where there’s higher value in the future.”

Volpé expects that next year, when the autonomous log loader is being tested in a mill yard, they will have an idea of the impact on operational costs. It will take a couple more years before we will see automated machines in the woods, but it’s obvious there is a need, he adds.

“It will be more difficult to automate felling and forwarding, to make that fully automated,” he says. “But, if you can have some components of the equipment that’s automated, that makes the job easier, and we’ll have a better case to attract people to the industry if we can automate some processes.”

Related
Staying ahead of the curve: OptiSaw 2018 showcases the latest tech
OptiSaw challenges sawmillers to do more with less
‘Our focus is on impact with speed’: Stéphane Renou talks Forestry 4.0
FPInnovations collaborates to improve moisture content measurements