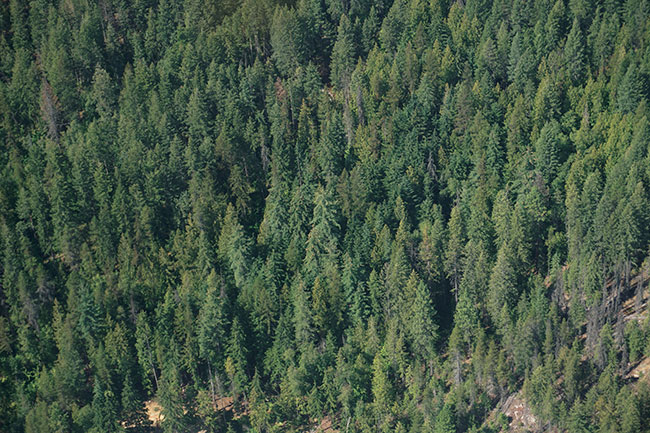 During the summer of 2021 as the region sweltered under a ‘heat dome,’ firefighters from the BC Wildfire Service battled a large wildfire in the Trozzo Creek watershed close to many Slocan Valley communities. Thankfully, some of this area was already being managed by the Slocan Integral Forestry Cooperative (SIFCo) to reduce fire intensity.

“It was very useful,” said SIFCo manager Stephan Martineau. “That area was used as an anchor for a backburn that burned toward the fire and created a barrier for the advancing flames.”

This stopped the fire in its tracks and allowed fire crews to establish and protect the northern edge of the wildfire.

These fuel reduction strategies are becoming increasingly common and several local community forests are getting an influx of cash to continue doing similar work. A lot of the money is coming through grants provided by the Forest Enhancement Society of BC (FESBC.)

“These new projects funded by FESBC will help build communities that are safer and more resilient to climate change,” said Minister of Forests Katrine Conroy in a press release.

Both the Nakusp and Area Community Forest (NACFOR) and the Kaslo and District Community Forest Society (KDCFS) have recently received grants totalling about $350,000 each, while SIFCo received approximately $500,000. Projects range from creating access roads for wildfire crews to thinning out forests so they don’t burn as intensely.

The investment push by the FESBC will fund 34 wildfire risk reduction projects in BC over the next year and a half, with the added goal of improving forest health and reducing environmental impacts. The FESBC receives financial support for this from the Province.

The local grants are for projects that follow landscape-level plans created by community forests to manage long-term forest health. Most of the work is done in coordination with the larger wildfire risk reduction plans of the Regional District and local municipalities.

For Nakusp, that means creating a fire break parallel to the boundary of the village in the north, east and south. The grants pay for fuel reduction treatments to be completed in a 40-hectare zone and for further assessments to decide what’s needed on another 110-hectare area. This work will be in the Wensley Creek area and run into early 2024.

According to NACFOR Operations Manager Frances Swan, most of the work involves cleaning up ground fall, cutting away branches and removing small trees. An eight-hectare area is slated to have larger trees removed.

Swan said that NACFOR is battling the perception that these fuel reduction projects benefit them financially. They receive 100 per cent funding from outside agencies so they don’t need to be worried about recouping costs through harvested materials.

If the material can be used, she said it would likely be sent to the Mercer Celgar pulp mill.

“If there’s an opportunity to use the fibre, that’s a good thing,” she said. “Otherwise, it will be piled and burned on site.”

Over in Kaslo, KDCFS Manager Jeff Reyden is dealing with both the need to reduce fuels and the impacts from last summer’s Briggs Creek fire. As that fire burned through their tenure, it damaged about $5 to $6 million worth of trees that now need to be salvaged before they die, he said.

The Briggs Creek fire illuminated the need to ensure firefighter access to difficult terrain in their tenure. KDCFS added a project on Mt. Buchanan to their grant application after the fire. The mountain looms above Kaslo, encompassing the entire northwest area between Highways 31 and 31A.

“Just watching that Briggs Creek fire creep down the face across the valley made us all wonder what if that happened on Mt. Buchanan,” Reyden said.

KDCFS has four grants for projects to be completed by March of 2024. Two of those are to create fuel reductions plans on Mt. Buchanan and over in the Lost Ledge area, while the other two are operational grants for work adjacent to Highway 31A just outside of town and for building an access road in the Branch 7 Forest Service Road area.

The Lost Ledge and Mt. Buchanan projects will need separate grants for the actual work and Reyden said the Mt. Buchanan job will be quite difficult due to the steep terrain. They want to create a couple-hundred-metre-wide fire break up on the hillside by thinning out the forest and removing low branches. This type of treatment shouldn’t leave a large visible scar on the hillside, he said.

“As long as we can remove as much ladder fuel to have a defensible spot for BC Wildfire Service in case of fire then we’ll be successful,” Reyden said. “They’re kind of manual-thin-from- below treatments so you won’t see any visible impact to the forest due to the treatment style.”

The physical work of this project will not begin until probably 2024 or beyond.

Back in the Slocan Valley, SIFCo is also dealing with the effects of large fires like Trozzo Creek, but Martineau struck a positive tone, saying they have been planning for this since 2009. Back then as climate change impacts became clear, SIFCo identified 12 areas in need of landscape-level fuel management treatments. Of these areas, he said eight have had work totally completed while the others are well on the way.

“Another two or three years and we should have completed what we set out to do 13 years ago,” Martineau said.

He said SIFCo has done almost 1,000 hectares of fuel reduction treatments since 2009.

All three community forests are looking to continue working with other agencies and local communities on these wildfire reduction projects.

“It’s part of a larger strategy,” NACFOR’s Swan said. “A big part of wildfire risk reduction is community outreach. The funding is the easiest part.”

Mark Page is a Local Journalism Initiative Reporter for the Valley Voice.