The B.C. Interior’s timber harvest and sawmill production is expected to undergo a long-awaited downsizing as the effects of the mountain pine beetle (MPB) infestation take their toll on the timber supply. The epidemic is responsible for one of the largest natural environmental catastrophes ever seen, and could eventually kill up to one billion cubic metres of standing lodgepole pine timber in the B.C. Interior. For perspective, the total volume of killed pine trees in the province by 2022 would produce enough lumber to build a 40-year supply of single-family houses in the U.S. (at today’s low rate), or 175-year supply of single-family houses in Canada.

Russ Taylor The B.C. Interior’s timber harvest and sawmill production is expected to undergo a long-awaited downsizing as the effects of the mountain pine beetle (MPB) infe

While a massive salvage program has been underway for much of the last ten years, several factors — an erosion in log quality, poorer conversion economics, and a shorter shelf life for the dead timber — will combine to result in a much smaller B.C. industry in the future. The outcome will be sawmill and plywood mill closures that have significant and direct consequences on rural B.C. communities. Depending on a wide range of market variables and processing assumptions, the B.C. Interior may be able to delay the inevitable; however, peak sawlog availability in combination with the economics of harvesting are now forecast to occur within three to five years. 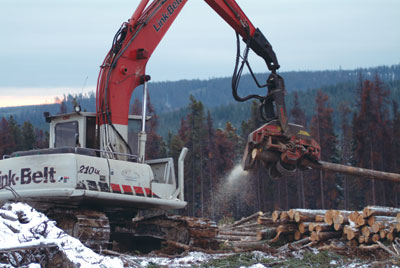 The proprietary “B.C. Fibre Model” simulates the regional wood fibre supply to 2028 for the eight B.C. Interior regions most affected by the MPB epidemic. It provides an assessment of the impact the MPB will have on key B.C. forest products, including log supply, softwood lumber, plywood and residual fibre (chips, sawdust, shavings and hog fuel) production. Sawlog shortages caused by the MPB could trigger the permanent closure of some 16 large primary sawmills and/or plywood production facilities within the B.C. Interior by 2018 (with more to follow when the beetle has completed its cycle). Due to differing proportions of pine within each region and the varying degrees to which the beetles have affected the standing timber, the impacts of the epidemic are different between the eight Interior regions assessed. For instance, some are being impacted severely, while others have experienced virtually no effect at all. This will not be good news for some B.C. communities, as the expected mill closures will be concentrated mostly in the central Interior region.

The forecasted sawmill and plywood mill closures are a function of the so-called “shelf-life” of the dead timber and the declining economics of processing dead logs. Each mill and/or company is approaching the situation of processing the dead timber differently, but the end result appears to be almost a 50% reduction in the long-term timber harvest and lumber production in the B.C. Interior from its 2005 peak, all due to the MPB epidemic. While the shelf life can be extended significantly by strong lumber markets and higher prices, the reverse is also true.

From peak output of 15 billion bf in 2005 and just nine billion bf in 2009 due to the U.S. housing market collapse, B.C. Interior lumber production is expected to peak sometime around 2013–14 (based on the ongoing recovery in U.S. demand). After this point, a steady decline in production is expected as the economics of processing MPB  timber (due to shelf-life issues) decline. The B.C. Interior lumber industry will see lower timber harvests and will need to begin reducing production and/or closing mills, and this impact on the U.S. market will soon be profound. So, in conjunction with reduced Canadian timber supply and the lumber output reductions that have occurred in Quebec and Ontario, there will be a noticeable decline in Canada’s lumber supply base — and it will be permanent. It takes 70–90 years to grow trees in Canada, so B.C. and the whole of the country will not see its lumber production return to the lofty levels of 2004–2005 for many decades (perhaps up to a century!).

As a result of the impact of the MPB on B.C. lumber output, there is potential for a North American “supply gap” relative to the traditional operating rates by region and expected North American demand. This is based on possible trends in U.S. softwood lumber supply, and projected imports (from Canada, Europe and other sources). This anticipated supply gap is an indication that tightening lumber supply will create some changes in how U.S. lumber demand is to be met as early as the midpoint of this decade.

It also means that Canadian lumber exports and U.S. consumption market share will remain at much lower levels versus the boom years of 1990 to 2005. When trends in lumber imports by country are converted to market shares, the plunge in Canada’s production becomes more evident in its market-share loss. From an historical 32% to 36% U.S. consumption market share from 1993 to 2007, Canada’s market share under the projected production scenario could drop to about 20% over the forecast period. The share for Europe is expected to rise steadily from its low rate of less than 1% in 2009. The import market share for the other supplying regions (mainly Southern Hemisphere plantation pines) is anticipated to remain steady.

Also impacted in each B.C. region is the projected byproduct output, including residual wood chip, sawdust, shavings and hog fuel (bark) supplies. Residual wood chips will be surplus to demand in the short-term as sawmills return to more traditional operating levels. However, the surpluses are quite regional in nature, so, over the longer-term, as sawmills close, residual wood chips will once again be in short supply within the B.C. Interior. Of note, major shortfalls in sawdust and shavings are also forecast within the Interior; while hog fuel appears to be in balance provincially, regional shortfalls and surpluses are significant. Opportunities may exist for wood pellets and perhaps biofuels in the short-term, but the supply of long-term residual byproducts will start to be taxed heavily by the existing users.

On a brighter note, it is forecast that, in the short-term, more than 225 million cubic metres of wood biomass — including harvesting waste, unmerchantable timber and some standing dead timber — may come available to support new biomass-consuming industries throughout the B.C. Interior, provided the economics of recovering that fibre can be supported. As sawmill closures occur and the provincial annual allowable cuts (AAC) for timber fall, however, these potential biomass surpluses will be reduced significantly.

The MPB is endemic to parts of western North American and is normally kept in check by cold winter weather (-30°C) that lasts for a period of one to two weeks. In the absence of sustained cold winter temperatures since about 1995, the MPB has devastated the pine forests of the Province of British Columbia, one of the world’s largest pulp and wood products producing regions.

The above analysis and other perspectives and outlooks of the MPB epidemic in the B.C. Interior are part of the revealing and comprehensive assessments contained in a new multi-client report published by International WOOD MARKETS Group. B.C. Interior – Mountain Pine Beetle Attack: Impact & Outlook on B.C. Timber Availability & Wood Products Production is a strategic analysis that assesses the critical impact of the beetle attack on B.C.’s key timber and wood products producing regions. The report is a result of the combined efforts of three B.C.-based consulting firms and four consultants: Jim Girvan (Management Decision and Technology Ltd.); Murray Hall (Murray Hall Consulting Ltd.); and Gerry Van Leeuwen and Russell Taylor (International WOOD MARKETS Group Inc.).