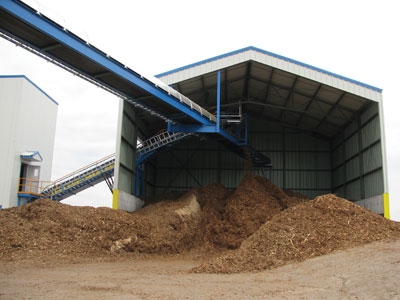 Bark is stored under cover in the Béarn mill yard. Newly installed biomass boilers and other upgrades have breathed new life into Tembec’s Béarn sawmill.

“This is a great environmental project that will allow us to eliminate 8,200 tonnes of greenhouse gas emissions per year. It’s like taking 2,412 cars off the road. But the project also reduces our production costs, by bringing an 80% decrease in drying costs,” says Marc Paré, general manager of technical services at Tembec.

Only a third of the bark from the sawmill will be burned as fuel for the dryers. The rest is sent to Tembec’s nearby pulp mill in Témiscaming.

The investment in the Béarn sawmill is also a clear message that the sawmill is an important asset for Tembec, according to sawmill general manager Mario Tremblay. “We want to position Béarn among the area’s top producers. In 2011, the mill ran just 15 weeks. With this investment, Tembec shows that this site, positioned strategically close to Témiscaming, where the company is investing $190 million in high-value products, may also rub off on Béarn,” he says confidently.

Moreover, other investments are being planned for the mill over the coming few years. “This is the beginning. We want to achieve better profitability. The worst is behind us. We no longer talk of temporarily closing Béarn.”

Feeding the Biomass
As part of the upgrade the company has invested in a bark handling and processing system as well. To ensure consistent bark quality, Béarn installed a Rawlings 48 x 60 hog with 500-horsepower motor. Both the hog and the GAL Industrial bark conveying system are housed in a new Finar Steel Building, a company from the south shore of Quebec’s St. Lawrence River that built all the new buildings for the project. Once ground, the bark produces a better fuel, especially for the Témiscaming site, which is not as forgiving as the new sawmill boiler when it comes to fuel quality. “We must offer material as uniform as possible for the quality of combustion and handling,” says Paré.

Processed bark is moved via a scraper to feed another Wellons FEI conveyor, which in turn leads to the combustion chamber. The mill can store up to three days’ worth of processed bark, which also saves the cost of a loader operator during the weekend. The 700-horsepower hybrid boiler has both water and direct fire tubes to create the steam. Steam is then transported by FABMEC suspended pipes to the existing kiln dryers. At the exit of the combustion chamber, an electrostatic precipitator from PPC Industries in Texas reduces the particle emissions to well below current environmental standards. “If standards change, we will still comply,” Tremblay adds with confidence.

Project management was carried out jointly by Tembec’s technical services team out of nearby LaSarre, Que., and the inhouse team at Béarn. “Usually, we would outsource this kind of turnkey project. But this time, it was all done in-house. Both deadlines and budgets were met,” says project manager Jean-François Lessard.

The plant currently has two older sawlines producing both random length and stud products. The 16-foot material goes through an updated Swecan curve-sawing twin canter followed by a Comact curve sawing gang. The stud line is a four-sided canter made by local supplier Boreal Hydraulic Equipment (now DMC Welding) followed by an optimized reman edger from PHL Industries. The green end is an optimized Carbotech multisaw trimmer with a 64-bin sorter/stacker line.

While there has been no investment in recent years in the sawmill given the market, with the biomass conversion in its rear-view mirror, and drying costs under control, Tembec is looking at upgrading the rest of the mill.

“Now that we are running a full schedule, today’s priority is to bring the plant to up to 95% of its production capacity as is,” says Tremblay. “Then we will move towards optimization, even an increase in production.” He cautions that for these new investments to be made, the rest of the puzzle pieces must fall into place, including markets and a solid work force.
Drying is currently done in two kilns – a Bachrich steam dehumidification kiln handles140,000 board feet per charge, while a 260,000 board feet Wellons/Salton steam kiln handles the bulk of production. In total, the mill can dry 90 million board feet per year, but the biomass project opens the door to further expansion, according to Tremblay. “With the new biomass boiler, we can add a third kiln as needed. It has the energy needed to increase our drying.”

On-site planing facilities include a fairly conventional tilt hoist and infeed supplying a Yates planer updated by DK Spec. This is followed by an Autolog linear optimizer and Metriguard MSR machine, the latter likely to be a valuable tool in the near future as MSR production from the B.C. Interior is expected to decline just as U.S. demand increses. Trimmers and sorters from Carbotech finish the line.

Lift trucks and millyard loaders are operated and maintained on a contract basis by Dechatem out of Béarn.

In all, 99.3% of the resource harvested is converted into valuable products. Half is turned into lumber, the rest to salable byproducts. The chips are mainly sent to the Tembec pulp mill in Témiscaming, a veritable biorefinery itself, producing NBSK pulp as well as specialty cellulose and biochemicials. The pulp mill has recently received a substantial bioenergy and production investment of $190 million, part of a two-phase, $310-million upgrade that will make the plant one of the world’s largest and lowest-cost specialty cellulose plants.

Even the ashes of the new sawmill biomass boiler have value. “Farmers cultivate land owned by Tembec around the plant,” Tremblay explains. “The ash will be used as fertilizer.