Features Mills Sawmilling
Back in production

Feb. 3, 2015 - On August 5th, the sawmill in Ear Falls was restarted, once again producing lumber for the U.S. and Canadian housing market. It had been nearly five years since the mill last hummed with the sound of lumber processing through the line, and it took a change in ownership and a recovering market to bring the mill back to life.

On December 7th, 2009, amidst the recession that followed the collapse of the U.S. housing market, Domtar closed the doors on the Ear Falls sawmill, located just south of the community of 1,000 over 100km northwest of Dryden. The mill had been idled in April of that year, but Domtar attempted to reopen the mill a few weeks later, only to shut it down once again in October. The closure put approximately 130 out of work, adding to the long list of mill closures in the region.

In March of 2010, Domtar sold the shuttered mill, along with six other mills and an equity interest in a seventh, to EACOM Timber Corporation. At the time, there was no definitive statement made about the future of the Ear Falls sawmill, but three-and-a-half years later, on October 9th, 2013, EACOM officially announced that the mill would re-open. Around the same time, a major shift took place in the senior management of EACOM, as Kevin Edgson took over as President and CEO and Jeff Webber took over as COO.

The push to rehabilitate and re-open the Ear Falls sawmill has been the first significant undertaking for Edgson as company CEO, and it represents a significant step in the recovery of the forest industry in northwestern Ontario.

“We looked at the opportunity of the asset, the forest resource that it depended on, and the outlook for the market driven primarily by an increasing demand in the U.S. housing market,” says Edgson. “We saw a shift in the demand/supply balance, and felt the Ear Falls assets to be well positioned geographically so we made the decision to undertake a restart to accommodate the demand.”

The sawmill was built just southwest of the community of Ear Falls. Originally built by Avenor Inc. in 1998, the mill was sold to Weyerhauser and then to Domtar before being part of the package sold to EACOM in 2010.

The mill is primarily a Comact mill, although several processes have either been tweaked or upgraded. The debarking process was the first piece upgraded, under previous ownership, with two 21” ValonKone debarkers installed five years after the mill opened. Both the small log and large log saw lines are the original Comact units installed in 1997. The small line features a log turner, DLI, canter, TBL and gang, while the large log line consists of a log turner, DLI, canter, quad saw, TBL and gang. Side boards are sent to the Comact edger. The line has been upgraded with the installation of new Prologic log scanning optimization system as part of the log sorter/debarker process, tied to a Modicon PLC system.

The trimmer line and sorter is Comact equipment from the original build which now features Prologic scanner optimization equipment. Those lines run at approximately 160 lugs per minute. The original Comact stacker can stack a pile every 3-5 minutes, according to Operations Manager Harrison Wicks, who has overseen the restart of the Ear Falls sawmill.

The planer mill features a Comact in-feed out-feed with a Newman-Whitney planer that runs at about 1200 linear feet per minute. That line has also seen upgrades to its optimization with the addition of a VAB auto grader.

The mill is producing 2x3, 2x4, 2x6 and 7 to 9 ft. boards targeted at the housing market both in Canada and the U.S. The chips produced are shipped to Domtar in Dryden, with an expected 100,000 odmt/year in chips produced at full capacity.

In total, the investments made just on the inside of the mill represent a multi-million-dollar commitment to the operation in Ear Falls.

“The optimization and electrical systems were either out-of-date or in dire need of upgrading, so a significant part of the investment was used to modernize and bring the systems and the processes back up to today’s standards,” says Edgson.

Outside of the mill itself, the original set of three Wellons Canada kilns are in operation, with the capacity of 230,000 board feet per charge. That provides the mill with the ability to dry approximately 3.5 million board feet per week. The heating system for both the mill and the kilns is a Wellons Canada 84 million BTU wood waste system, which burns the bark and sawdust from the mill. The system is coupled with a 30 million BTU natural gas systems, which runs as a backup system. However, it does run the plant’s thermal oil heat exchanger, used to heat the plant by running thermal oil through the system at between 220-230° Celsius.

In the mill yard, three new Volvo L150G loaders have been purchased to move wood waste and lumber, along with a Sennebogen 830 material handler for stacking logs. The log sorter features a Caterpillar M325C, a relic of the previous ownership that has stayed in good condition for use by EACOM.

The sawmill was restarted on August 5th, with the planer coming online on September 2nd. Just nine days later, on September 11th, the first shipment of lumber left the yard for the rail lines. The mill is running one shift with 44 employees at this point. At that level, the company is able to produce 66 million board feet annually. Full production at the mill, which would include a second shift, is being discussed for sometime in 2015.

So far, EACOM has been able to acquire the needed spruce, pine and balsam logs to support a single shift at the mill. But the company is working with surrounding communities to ensure that there is a workforce out in the forest that can meet the long-term wood diet demands of the mill.

“It has been dormant in the area in that the sawmills have been down for a number of years,” says Edgson. “As such we are working to rebuild the hauling and harvesting contractor capacity by working with individuals and groups who are interested in strengthening their operations in the area. These were seriously lacking when we announced we were restarting the mill.”

That difficulty did not extend to the mill itself, as EACOM was able to find a strong workforce in the Ear Falls region, including a solid base of young professionals eager to get involved in the mill. According to Edgson, the local management group did an excellent job of building the team in Ear Falls.

“The real credit goes to the folks in the field, on the ground in Ear Falls. We were very pleased at the interest level and the quality of the applicants that we were able to draw from.”

The big picture
The Ear Falls mill is a key component of EACOM’s overall business, one of four stud mills to go along with the company’s three dimensional mills.

“[Ear Falls] is a fundamental part of what we would view as our asset base,” says Edgson. It is an important part of our stud supply. While geographically it is at a distance from the rest of our assets, we think that logistically it is in an ideal location to supply areas of the market that we had not been as active in.”

Those markets include the U.S. Midwest, which is easier to access as opposed to the other stud mills owned by EACOM. The rail access afforded to them in the region also means that the mill can reach the company’s traditional markets in southern Ontario and the east coast, which gives the company options for the lumber produced at the mill.

With wood markets becoming more stable, and the Ear Falls mill continuing its progression towards full operation capacity, EACOM is able to focus on additional challenges and opportunities facing the company.

While finding young, talented skilled labour has not been a challenge thus far for the Ear Falls mill, it remains a concern for EACOM’s operations across Canada.

“The industry has a requirement, in terms of attrition, for a significant number of tradespeople to join the workforce,” says Edgson. “Recruiting them, or better yet, training them and providing them the kind of future where we can offer them a stable opportunity, is probably the most significant challenge.”

There is also a question of whether or not to engage the booming bioenergy market, as pellet production has become a popular alternative for using wood waste from the mill. In Ear Falls, that waste is used for heat energy. And for EACOM, that may continue to be the focus.

“Pellets offer an intriguing opportunity, especially given their success in the West,” says Edgson. “But a lot of the prime pellet supply material is currently used in drying opportunities where we don’t have a natural gas alternative. If you look in the West, a lot of these mills have natural gas as an alternative energy source and, therefore, can turn their shavings, chips and dust towards pellets. We don’t have that opportunity at most of our mills.”

Instead, the company will focus on new prospects for additional revenue sources within their current mills, as Edgson believes that there are a number of high return projects available within EACOM’s current mills. Should the demand for lumber continue to grow both at home and abroad, EACOM looks poised to be able to grow right along with it. 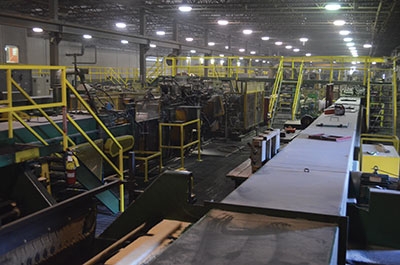