In December of 2012, Great Western Forestry was once again in the forests surrounding Grande Prairie, Alta., working with provincial governments in their joint effort to eradicate the mountain pine beetle from the forest.

For Great Western Forestry, managing the spread of the mountain pine beetle has been a large part of business for the past five to seven years. It has been part of the changing landscape of the logging industry in Canada, one that GWF has worked hard to adjust to over the past decade.

A Changing Business
In 2006, Great Western Forestry, along with Atlantic Fiber Resources, formed to create the Canadian Northern Timber Group. That partnership has helped build GWF into one of the largest forestry companies in Western Canada, and also helped to move Atlantic Fiber Resources forward as a key supplier of wood pellets to Europe.

Before becoming the Canadian Northern Timber Group, Great Western Forestry primarily did business in the eastern part of the country, as well as in the United States. But according to operations manager Kevin Dudka, most of those opportunities, especially in the U.S., have disappeared.

“The U.S. market has almost disappeared due to money issues,” said Dudka. “Ten years ago, we did quite a bit of business in northeast United States, but that business no longer exists.”

In order to survive the changing landscape of the logging industry, Dudka has taken a different approach to building both his team and his operation. Now he has put together a staff that has the mobility to move to the work, rather than rely on getting work in a given geographical area.

“The landscape of this industry continues to adjust, so we’ve had to adapt,” said Dudka. “Management of the mountain pine beetle in Western Canada has provided opportunities for work, and the mobility of our workforce has allowed us to take on that work. It’s forestry without boundaries.”

Managing MPB in Alberta
Mountain pine beetle management has become a foundation for GWF’s annual business, as the company works closely with government agencies in British Columbia, Alberta, and Saskatchewan. Alberta has become the primary focus for the company, as the provincial government has implemented an action plan to try to halt the spread of the beetle. In 2008, GWF was recognized by the province for its work helping to stop the spread of the beetle, and was named the “No. 1 Protector of Alberta’s Forests.”

In 2011, Great Western put together one of the largest teams that has ever formed, setting up a 68-man camp in Chinook Ridge, Alta., located southwest of Grande Prairie on the border with B.C. That team worked to identify, tag, and cut and burn trees affected by mountain pine beetle as it continues to move east from B.C. In late 2012, a team of around 45 was part of phase 1 of the newest containment initiative in Alberta, this time located approximately 70 kilometres south-southwest of Grande Prairie, east of the site managed the previous year. That team spent four weeks tagging before the Christmas break, and was followed by a larger team that is currently working in the area to continue the work of identifying, tagging, and cutting the trees. Both of the sites lie within the areas that are identified as active holding areas, areas where the concentration of forestry efforts is on stunting the population of beetle-infested trees.

Because of the regulations set out in the Mountain Pine Beetle Action Plan by the Government of Alberta’s Ministry of Sustainable Resource Development, and the potential long-term impact of missing infected trees, workers must be very careful not to miss trees during the identification and tagging part of the process. The ministry requires three levels of investigation of each mountain pine beetle affected site. The forestry company is responsible for the first level of investigation, which involves reviewing and inspecting the area to ensure that all trees have been properly identified. The second level of investigation is performed by a government-hired third party group, who must inspect a minimum of 15% of the area covered by the forestry operation. The Alberta government conducts the final level of investigation, which determines whether or not the forestry company receives the full amount of the money awarded in the initial contract for the work. The company’s ability to effectively do the job is the basis for its financial compensation at the end of the contract, so having a strong and knowledgeable crew for the work is vital to the operation.

Making sure that every tree affected by the mountain pine beetle is found is critical. According to Dudka, removing the infested trees from the forest will have a great impact on the health of the remaining forest.

“For every tree we cut down and burn, we are saving anywhere from six to 10 additional trees,” said Dudka. “The number of pine beetle trees we cut in one season equals millions of cubic metres in trees saved as a result.”

In the forests southwest of Alberta, burning has become the only option for removing the beetle kill wood from the forest.

With Dudka’s staff travelling several miles from the road to the jobsite via snowmobile, the workers can’t haul the wood away from the jobsite without incurring increased associated costs. Also, since the work is being done in the winter, trees can be burned with a minimal risk of a forest fire, an issue of concern in Alberta based on the summer climate and soil quality. But if Great Western Forestry encounters a dry winter, extra precaution has to be taken, usually resulting in the wood being burned at night.

The weather has constantly changed the conditions for the Great Western Forestry staff in Alberta. In 2011, there was very little snow in the region, less than six inches in most spots, so mobility was much easier for the team working in the forest. Temperatures were also much cooler, with fewer days reaching temperatures below -10°C. This year has been exactly the opposite. In December, when the latest operation began, the Grande Prairie area received two to three feet of snow, with temperatures averaging around minus -25°C during the day. Those changing weather conditions change the equipment needed for the operation, the amount of service and maintenance needed, the pace at which the workers can identify and tag, and the conditions for burning.

The team uses both Hyundai and Cat excavators in the field, with Tigercat feller bunchers clearing the trees in spots where heavy machinery can gain access to the jobsite. When the big iron can’t make it to the site, GWF relies on a cache of heavy-duty Husqvarna chainsaws. The team usually keeps close to 100 chainsaws at their operation at all times, eliminating any downtime that can occur if one needs repairs or becomes inoperable in the forest. A fleet of Dodge Ram trucks transports the team and their gear out to the forest, including a secondary fleet of snowmobiles used to access some of the more remote sites. That equipment powers the operation during the winter, and receives repairs both at the company’s service centre just outside of Grande Prairie and on site during any downtime the company faces during the summer months. They will also pull equipment from their eastern operations if needed to meet the demands of the operation in Alberta, with a Cat excavator arriving from New Brunswick the day before the Christmas break. Having spare equipment ready to go, being able to service machinery in Grande Prairie, and being able to import equipment from their other operations almost completely eliminates any lost time from occurring in the forest due to machinery.

Fighting the Mountain Pine Beetle in Saskatchewan
In addition to its operations in Alberta, Great Western Forestry has been on the frontlines in Saskatchewan as that province starts to fight the mountain pine beetle. GWF is now working with the Saskatchewan Ministry of Environment to control the infestation that is starting to creep into the province. In 2011, approximately 250 affected trees were found in the Cypress Hills area, home to one of Canada’s most pristine national parks. In 2012, that number rose to between 450 and 500 trees found. It is believed that much of the problem is not coming from Alberta, but rather crossing international borders by coming up from the forests of Montana. In addition to the problem already occurring in the southern part of the province, the mountain pine beetle has been spotted within 50 kilometres of the Saskatchewan border in the northern part of the province. As a result, the provincial government has invested several million dollars to help stunt the spread of the beetle across the province.

As the mountain pine beetle continues to move west into parts of Alberta and Saskatchewan, governments are continuing to invest in the expertise of forestry operations from across Canada to help stop the spread of the deadly insect. For Great Western Forestry, working with these governments has helped to sustain its business operation and gain a reputation as one of the premier silviculture operations in Canada. 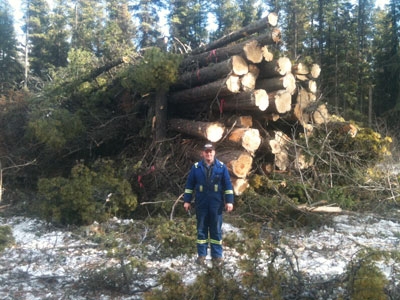