The mountain pine beetle (MPB) has ravaged Interior BC high-elevation pine forests, but the tiny insect with the boring disposition is also hitting stands within city boundaries. BC, Alberta and even US cities – many reliant upon tourism – are expected to be hit, creating not only an eye-sore, but a potentially deadly situation where these dying or expired trees are able to candle a fire into heavily populated areas from forests outside. Cities such as Prince George, which has 33,000 ha of forested and developed land within its boundary, have instituted a community fire protection plans, which look at single-stem or small scale harvesting to mitigate a potential city fire threat similar to that posed by the Okanagan Mountain fire of 2003. 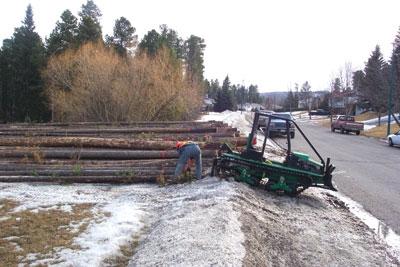 In BC, TDB Consultants Inc., a Prince George company, has carved out a niche harvesting infested wood for the past six years in what it calls small-scale sanitation treatment (SSST) for beetle infestation and fire protection around parks, schools, golf courses, hospitals and public areas in that northern BC city. It has developed highly specialized crews, effective protocol, and through trial-and-error found select equipment that can go into urban areas and extract infested or dangerous trees.

It is challenging work, where crews and equipment have to be vigilant regarding the public, work under constant public scrutiny and in constrained sites. But, TDB is keeping a six to 12-man crew working 12 months a year, and proving that diversity today is more than simply moving from one-phase to multi-phase logging.

TDB’s reputation has extended into Alberta and even the US.  Recently, it fielded a call from Colorado, where the MPB is also hitting population-rich areas, tells Tim Nowe, forest operations managing partner for TDB’s forest division. The company has also worked in the Banff area, where there is growing concern that the MPB will affect the area’s scenic beauty, a foundation for the area’s tourism. “Wait till it reaches Whistler – hopefully that won’t happen before 2010,” says Nowe. But, parks, hiking and recreational areas have not escaped the threat from the MPB, and are becoming growing issues in vegetation management.

Not Logging
“We don’t call what we do logging,” says Wade Sjodin RFT, TDB president and one of five partners that make up the firm that works in resource sectors such as forestry, mining, and oil and gas. The simple reason is that the term “logging” doesn’t convey the intent of the exercise.

General manager and partner Steve Nycholat RFT says the work carried out for a municipal government is really the reverse of conventional logging, and is more like commercial thinning or hardwood selection cutting. “It’s not what you take, but what you leave. The real value is in the trees that you leave behind – so it is totally the opposite of production logging.” In conventional logging, the primary consideration is harvesting wood fast and efficiently, while the secondary consideration may be the site. When working high-profile areas such as around Banff, the primary consideration for TBD is the visual impact, as well as the environment left at the site.
Commercial values do enter into the equation. The value of the wood harvested (either cut-to-length or tree length) will impact the cost of extracting the infested wood. Nycholat says that is really where TDB has been able to shine, as it has built up expertise in quoting these jobs, and then staying within the quote. TDB also does traditional forest consulting as well as SSST areas, so it has been able to draw from that expertise.

SSST extraction is labour intensive and demands creativity – in cases snowmobiles have been used to yard logs over longer distances. Also, locations near hydro lines require special consideration, as do heavily populated areas, scenic areas such as golf courses or parks and high-traffic areas. The planning phase is as critical as the execution, and negates the use of full-scale logging equipment such as traditional feller-bunchers, skidders, or forwarding equipment. Instead, TBD uses highly skilled hand-fallers able to work in often compromised areas and circumstances, and has developed a fleet of small, but powerful equipment that can work in urban areas.

“There is a real learning curve to this kind of work,” says Nowe, the partner that handles the forestry side. “We have pioneered this for the past six years, and I would say for the first four it was almost a losing proposition for TDB until we figured out the intricacies of how to do this. The really big issues are that you are working with full-sized trees in limited spaces and you have to figure how to get them down onto the ground and then bring them out.” The terrain can also vary from golf course flat to very steep slopes.

Mini Fleet
Ideally, says Nowe, a job well done means that there is little evidence that the company was there. TDB uses three Forcat 2000 skidders, two mini-Kubota excavators with small Rotobec rotating pulp grapples “so you can reach over banks and forward with it”, tells Nowe. As well, the company has an ASV mulcher for debris reduction into mulch that can quickly break down and also sustain other vegetation on site.

TDB has had to find ways to guard the healthy trees on site. “We don’t want to create damage to those trees that are left standing,” says Nowe.  TDB’s simple and low-cost solution has been to use plastic culvert pipe in different sizes as guarding material. They are split in half and then placed around any “rub trees” that may be on the skidding path, says Nowe.

The equipment – and culverts – are all highly portable. Nowe says they can be conveyed to a work site via a pick-up truck or small trailer towed behind a pick-up. Thus, the use of this small-scale equipment eliminates the need and cost of flatbed hauling. It also means that TDB can move from one area to another quickly between jobs or when moving equipment around larger sites. When TDB worked in the Banff areas, tells Nowe, each Forcat was easily moved from Prince George on trailers behind pick-ups. On the Banff SSST work, a snowmobile was also used, an aspect of the ingenuity that is an intrinsic element of this kind of work. “We were skidding over long distances to the road,” tells Nowe. As a result, the Quebec manufactured Berfor Forcats were used to forward the wood to a trail and logs would subsequently be hooked to a snowmobile for faster roadside delivery. SSST operations generally use self-loading trucks, again, streamlining the operation and also eliminating the ground disturbance from a roadside loader.

A feature of the Forcat skidder, aside from portability, is their low ground pressure of between 2 and 3 psi. This becomes especially important when working in areas such as golf courses, or, in wet areas (a feature of the northern area in spring and fall). The machines are also only 46 inches wide and 116 inches long, allowing them to move between trees and in tight spaces.

Sjodin says the Forcat is not the smallest skidder on the market, but trial and error has shown it brings the most sought values needed for SSST work. A smaller machine, he says, simply would not have the power to skid the logs. Berfor maintains that that the Forcat can handle a 16-foot long and 36 inch diameter log.

Last year, TDB purchased two Kubota KX121-3, four-ton excavators, equipped with Rotobec 60-degree pulp grapples. The Kubota’s excavators have a digging depth of 11’6″ but equipped with the grapple provide the reach needed to retrieve logs on a slope or in a gully. The Kubotas are also used to forward wood to be loaded, and in tighter areas can deck wood to conserve space. Another use of the Kubota is to clean up debris in an area.

Nowe says in park areas it can place debris on paths or trails and “we just run the (ASV) mulcher down the trail and mulch the path. What’s left is very pleasing to the eye”.

Despite the utility value of the Forcats and Kubotas in meeting the demands of SSST jobs, there’s still a gap. Nowe says the company is now looking to find specialized equipment that can access steeper slopes, retrieve logs, but not leave any signs of environmental damage. “We are looking at machines like the (Kaiser) Spyder,” he says, adding that TDB sent down crews to Washington State to watch the machine work. In the US, the specialized Spyder All-Terrain Walking Excavator mounted with a felling head has found a niche in thinning forests that are susceptible to fires. The rubber-tired unit with articulated walking legs can work on slopes that are 70 to 80%, as well as wade into water. It has proven useful for work around streams and doing stream restoration work.

Nowe says that the equipment side is just one aspect of this growing field of vegetation control for municipalities and utility companies. TDB also plays a large public-relations role with a website where individuals can query the sanitizing treatments occurring in their area. As well, crews are prepared to deal with concerned public members who may approach the work-site in highly visible areas and ask questions. In cases, a brochure explaining the work being carried out is distributed in the neighborhood. Work around schools may be suspended during lunch-times and periods when students are about. Also, spotters are required in highly public areas, as individuals do not always obey signs.

Nowe says those years of working with the public and governments undertaking this type of work has earned TDB a solid reputation in this growing field. TDB is now also able to play “a training role so that other companies can learn from our past mistakes,” as it consults with other companies. Becoming efficient in this SSST is something that doesn’t happen “over-night”, he says. “It’s been six long years of blood, sweat and tears to get this point.” Still, he adds it has helped the company stay in business despite a tough market. “In today’s environment,” says Nycholat, “you can bet what you are doing today is not what you are going to be doing tomorrow.”