November 24, 2021
By Forest Enhancement Society of BC

November 24, 2021By Forest Enhancement Society of BC 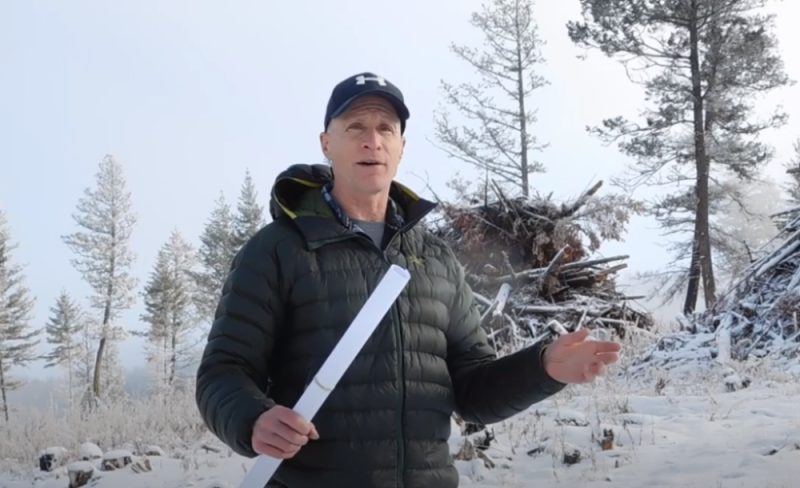 Steve Law of the Clinton Community Forest. Photo: Forest Enhancement Society of BC.

After wildfire burns through a forest, a lot of debris and charred trees are left behind—which is true of the Elephant Hill fire in 2017. Often this charred woody fibre can burn again but is left and not salvaged as the economic cost of doing so outweighs the market value. The Forest Enhancement Society of BC (FESBC) actively seeks innovative solutions to these sorts of challenges. The Clinton Community Forest (CCF) applied for funding to protect the community by recovering burned fibre, an opportunity to pilot a solution to this challenge.

In partnership with Ledcor Group and Arrow Transportation Systems Inc., FESBC and CCF aimed to recover as much burned and waste fibre as possible. $512,000 in funding was provided to recover and utilize 32,000 cubic metres of low-quality residual fibre, approximately 580 truckloads.

“Usable and viable timber can still be salvaged after wildfire—but only for so long afterwards,” said Steve Law, RPF, general manager, CCF. “Normally, we’d selectively log Douglas Fir and have about 50 per cent remaining. After a large fire, most of the work involves replanting without offsetting the cost through selling the logs. Without funding from FESBC, this work would not have been economical, and the fibre likely would have been burned. The financial support allowed us to recover the fibre instead.” 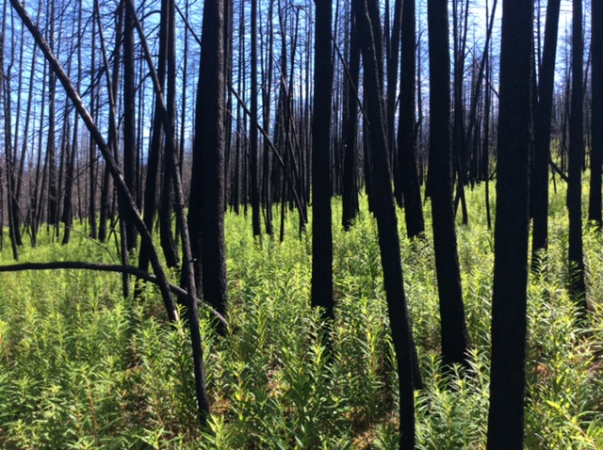 Burned trees in the Clinton Community Forest prior to salvage efforts. Photo: FESBC.

A portion of the recovered fibre from the community forest didn’t have far to go.

“Some of the fibre recovered was ground and trucked by Arrow and Ledcor to Kamloops,” said Ian Brown, vice-president, woodlands and fibre procurement, Ledcor Group. “This fibre was used as biofuel to make electricity and thermal power, and in some instances, the fire effected biomass logs were trucked to and sorted at River City Fibre to make pulp products and biofuel.”

Greg Kilba, division manager of portable wood processing and log buyer with Arrow, also noted that, “there’s still good pulp and bio wood out there left over from the 2017 wildfires but the costs are higher than the market value.”

The project also included funding of $128,000 to create a 100-metre-wide fuel break southeast of the Village of Clinton to help reduce future wildfire risk to the community.  The fuel break is a zone where trees are spaced farther apart, and the amount of flammable wood is reduced in order to slow down a wildfire. 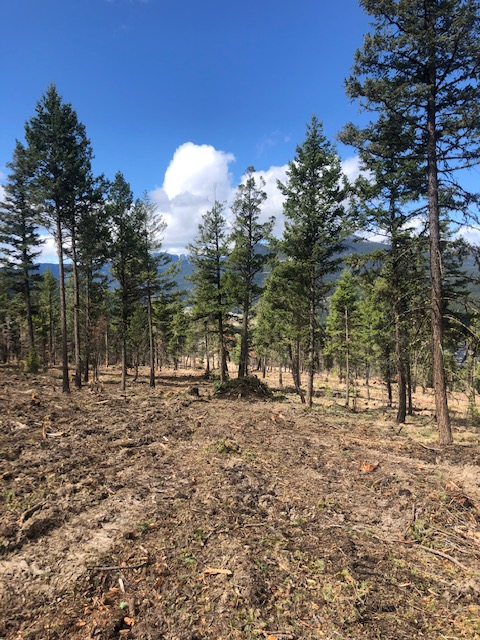 “What started as a wildfire risk reduction project turned into an opportunity to also recover fibre,” said Ray Raatz, RPF, operations manager, FESBC. “This project showed not only what we can do to mitigate the risk of wildfire but also what can be done to recover and salvage fibre after a fire.”

Raatz notes one of the reasons FESBC wants to fund these innovative projects is to facilitate these types of learnings.

“There’s also another big reason,” said Raatz. “By using the wood instead of burning it in piles, greenhouse gas emissions are avoided. Therefore, the people of Clinton through their community forest are doing their part to take to action on climate change.”

Law agreed noting that reducing the burning of wood waste is a win-win and there was good support from the municipality. After being heavily impacted by wildfires, the community is interested in seeing as much of the burned wood be chipped and trucked away instead of burned in piles.”

“This story of the Clinton Community Forest is a great example of how community forests can explore forest management practices and try something new, which has resulted in a long-term investment in the land base. Community forests are important, regionally and provincially, to provide a base for ingenuity and innovation.”