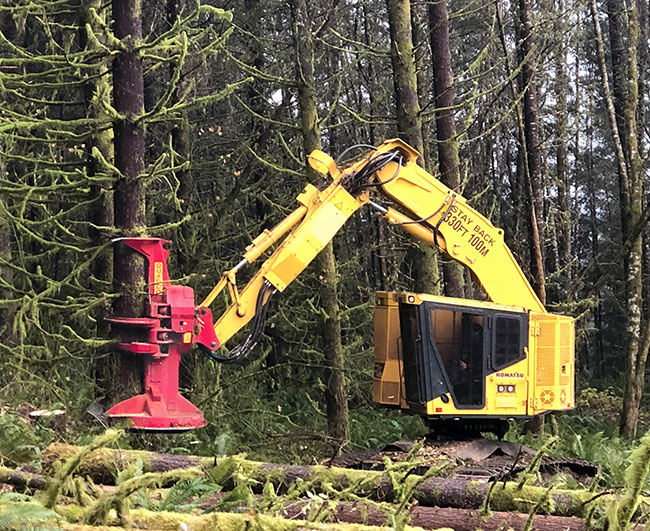 Over the past few years, the forestry landscape in B.C. has changed dramatically. Loggers have gone from salvaging mountain pine beetle-killed stands to facing a fibre supply shortage. But Prince George, B.C.-based Lo-Bar Log Transport is facing this challenge head-on by transitioning to steep slope logging and trialing commercial thinning operations.

Lo-Bar started as a loading and hauling company in Alberta in 1976, Mark Erickson, Lo-Bar’s business manager, tells CFI. They eventually expanded into full-phase harvesting and moved to B.C. in 2005 as a fairly small contractor.

Today, Lo-Bar is a full-phase harvesting stump-to-dump contractor, doing all of the harvesting, loading, hauling, and road building. On average, the company harvests and transports 800,000 to 900,000 m3 per year.

While the mountain pine beetle was making its way through the B.C. Interior, Lo-Bar mainly harvested pine. Now they have moved their operations further east of Prince George, where they primarily log spruce and subalpine fir stands.

A 100 per cent cut-to-length operation, Lo-Bar doesn’t use any skidders, instead relying completely on 14 John Deere 1910 forwarders.

“We’ve had good success with this,” Erickson says. “We find it works well, too, as we get to steeper ground with limited areas to deck and roadside work areas.”

A steep learning curve
The newest piece of equipment in the fleet is a John Deere 959 harvester for Lo-Bar’s steep slope harvesting. The transition to steep slope logging began in 2017, and was borne out of necessity, Erickson explains.

“In the areas that we need to operate, there’s a lot of steep ground to be logged, so if we wanted to be there and we wanted to harvest it, we needed to get equipped and get aligned with the land base up there,” he says.

But there has been a learning curve with this type of harvesting, he admits.

“Everyone’s trying different things to find a system that works well,” he says. “We’ve kind of found there’s no real magic bullet to what works best – it kind of depends on the ground and depends on what you’re up against.

“You’re always adapting, always changing what you’re doing and how you’re doing it in order to safely log areas,” he continues. “It’s been a learning curve, too, on the equipment complement, trying to find the right winch with the right amount of power to pull the right kind of machine.”

Ultimately, Lo-Bar settled on a Timbermax winch with a Tigercat 1185 harvester, and a Traction line with the John Deere 959 harvester. Three of the company’s John Deere forwarders also have the HAAS winch system built-in.

With the transition to steep slope harvesting, Lo-Bar also had to invest in new trucks for their hauling fleet.

“In flatter ground, where a lot of the pine stands are, we primarily used Western Star B-trains and a fair number of automatic trucks. But in the last few years, with the shift into the steeper, tougher areas, we’ve gone to a quad configuration, using a mixture of Kenworth T880s and Western Star 4900s,” Erickson says.

“Quad truck configurations are doing better dealing with the steeper ground – they’re just better suited for tougher ground,” he elaborates. “So, we’re in the process of changing out the fleet as the trucks age and replacing them with newer ones.”

Moving to steeper ground has also impacted Lo-Bar’s roadbuilding operations. The company builds an average of 70 kilometres of road in the summer and 50 kilometres in the winter. In their experience, larger hoes perform better in the steeper areas, Erickson says, so now they use Cat 558s and Cat 336s. 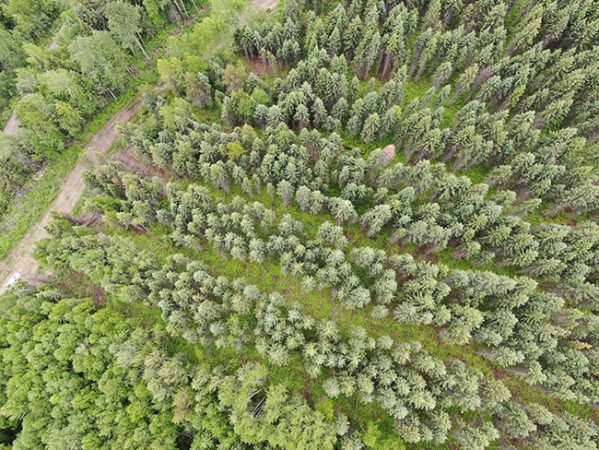 An aerial view of a stand where commercial thinning has been completed.

Future potential
Once Lo-Bar figured out its steep slope operations, they decided to trial commercial thinning in order to boost the fibre supply available to them. They applied to Northern Development’s Northern Industries Innovation Fund for a $50,000 grant to help with the costs of a commercial thinning project.

Once that was approved, in the summer of 2018, the company started an eight-month trial to see if commercial thinning was feasible for their business.

Initially, their interest in commercial thinning was piqued because Canfor, their licensee, was looking into it.

“We were interested in what it was, what it could be, and what it could mean not only for our company, but as a program as a whole going forward. So, we stepped up and purchased the equipment to give the program a try,” Erickson says.

“The first block we found went really well; it was a good stand, a good candidate,” Erickson says. “The second block didn’t go that great – it was a mixture of deciduous, small piece size, and had a lack of merchantable wood in the area.”

At that point, in the spring of 2019, the company decided to take a break from the thinning program and moved their machines to work in smaller piece size pine salvage areas southeast of Prince George, Erickson says.

“This kept the machines busy with the salvage work while we got a better idea of what we needed to do, and got some stands set up and ready to keep the program going,” he explains.

In May of this year, Lo-Bar began thinning in the third block. They also have a few more cut blocks lined up for thinning through the summer and fall.

But their experience with thinning has been a mixed bag so far.

“We really like the results once the stand is treated. It’s a good balance: you thin a stand that needs a silviculture treatment applied to it, and it also gives you access to fibre that you might not otherwise have,” Erickson says. “So, if you can find stands that can benefit from silviculture treatment, are economical to log, gives you fibre that you wouldn’t have and then also gives that stand a benefit to hopefully improve its productivity, size and economic viability, it’s worth it.”

However, it has been tough to get the program up and running.

“There have been struggles in the last couple of years to find good candidate stands that not only meet the age criteria, but also have merchantable wood that we can harvest, produce and deliver,” Erickson explains.

“That’s tough in terms of the economics,” he admits. “But we see the future in it and hopefully we’ll stick with it until it gets to the point where we have other stands come online in the future and we’re able to grow the program.”

‘A double whammy’
Despite this, Lo-Bar, like any other forest products company in B.C., has faced many challenges in recent years, including weak markets, dwindling fibre supply, and COVID-19.

“For us, the industry has been a struggle for sure over the last couple of years,” Erickson admits. “Last year, when we had the downturn, prices went down but the stumpage rates were still pretty high and weren’t really reflecting the current conditions.”

The depressed market, in combination with COVID-19, was a “double whammy,” he says. Multiple mills in B.C. had to take downtime in the spring, which impacted the volumes they needed and the volumes Lo-Bar harvested.

Lo-Bar also had to add more protocols and safety measures to protect the health and safety of their employees at their logging camps. In addition to buying extra cleaning products and personal protective equipment (PPE) for employees, they separated their employees into smaller groups with designated pick-up areas, bathrooms and wash areas to limit exposure. They also implemented staggered meal times to limit congestion in the dining areas. On the equipment side, they switched from double-shifting machines to only having one operator per machine to further limit exposure.

To be able to recover from the impact of COVID-19, more responsive timber pricing that reflects the current market conditions is needed in B.C., Erickson says.

When asked where he sees the industry in the next five to 10 years, Erickson believes it’s unlikely the industry will ever have harvesting levels as high as they were at the height of the mountain pine beetle epidemic.

Consequently, the industry will have to focus on doing more with the available fibre supply instead of harvesting more, he says. Programs and initiatives that provide access to fibre that would not otherwise be available, such as commercial thinning, will therefore be key.

As a result, Erickson believes Lo-Bar is well-positioned for the future.

“Lo-Bar has always been a pretty progressive company, always looking for new opportunities and new innovative things to try, whether it’s commercial thinning or steep slopes. I definitely see us being adaptable and changing to what the forest industry looks like, what the challenges are and what opportunities may lie ahead.”