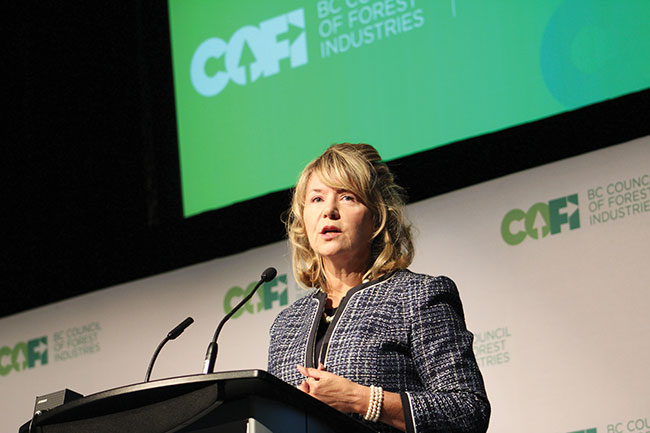 The BC Council of Forest Industries (COFI) is pleased to announce that British Columbia’s Premier John Horgan will be a keynote speaker at COFI’s annual Convention as it returns to Vancouver’s JW Marriott Parq Hotel & Convention Centre April 27-29, 2022. The Premier will address delegates at 12:15 p.m. on Friday, April 29. Minister Katrine Conroy will provide opening remarks to delegates on April 28.

“We are very pleased to welcome back Premier Horgan and Minister Conroy to speak to delegates at COFI’s annual convention,” said Susan Yurkovich, president and CEO of COFI. “An important conversation about the future of forestry is happening across B.C. We continue to believe that, working in partnership with government, Indigenous groups, labour and communities, the future can be bright. We look forward to hearing from Premier Horgan and Minister Conroy about how we can keep working together to make life better for people, help advance reconciliation and keep delivering low-carbon products to customers around the world seeking products that are a better choice for the planet”.

Over 700 delegates are expected to join the COFI Convention this year. In addition to remarks from Premier Horgan and Minister Conroy, featured sessions include:

Delegates will also hear from several other speakers about the challenges and opportunities facing B.C.’s forest sector including two panels – on how B.C. forest products can help support the global drive to net-zero and zero waste and readying the future faces of forestry.

Additional speakers are to be announced and, of course, there will also be lots of networking opportunities throughout the conference – something that has been missing the past couple of years at virtual events.

“Times have been tough for everyone over the past couple of years and we’re excited to be able to get together and catch-up with everybody in-person this year and will continue to have protocols in place to keep people safe and healthy,” Yurkovich said.

Related
BC issues progress update on old-growth, worker supports
Collective vision for BC forestry needed in 2022: TLA
BC confirms logging deferrals are in place for 1.7M hectares of old-growth
BC sets out plan to modernize forestry regulations