“The ministry has a robust forest health program and is committed to controlling the spruce beetle outbreak in the Omineca,” said Forests, Lands and Natural Resource Operations Minister Steve Thomson. “We recognize the importance of forestry in the north as a regional economic driver.”

The spruce beetle (Dendroctonus rufipennis) is a common forest pest that normally feeds on the inner bark of weakened or fallen spruce trees, but is capable of killing healthy trees if the infestation is sufficiently serious and prolonged. Spruce beetle outbreaks occur regularly in British Columbia and have historically lasted up to seven or eight years.

The current infestation has affected 156,000 hectares of forest in the Omineca region, specifically the eastern valleys of the Mackenzie timber supply area and northern portions of the Prince George timber supply area. This is a significant increase from the 7,653 hectares affected in 2013 and is the largest spruce beetle outbreak since the 1980s.

“We need to take aggressive action to control this current spruce beetle outbreak,” said Prince George-Mackenzie MLA Mike Morris. “I’m confident that with all groups working together, we will be able to do so.”

Recent weather patterns, including warm springs, dry summers, warm winters and windstorms (resulting in more tree blowdowns), have contributed to the increase in spruce beetle populations in the region. The Chief Forester is monitoring the situation to help ensure a balance between maintaining the mid-term timber supply, requirements of other resource values, such as wildlife habitat and the need for sanitation control of the spruce beetle.

The insects are native to British Columbia, so it’s not unusual to see them in the province’s forested areas. The Omineca region contains 9,018,763 hectares of forest, with 4,728,782 hectares available for logging.

The funding of $1 million for 2016-17 is in addition to the $850,000 the ministry spent on spruce beetle detection activities in 2015-16. Aggressive control activities include a focus on sanitation logging on the timber-harvesting land base and use of “trap” trees in areas outside the timber-harvesting land base, such as wildlife habitat areas, or areas that are uneconomic to harvest.

Heather Wiebe, resource manager in the Mackenzie Natural Resource District, has been designated as the Omineca spruce beetle project manager. She will be forming a public advisory committee that will work with stakeholders, communities and First Nations to represent the environmental and social values the forests of Omineca provide. This will complement forest licensees’ suppression plans. 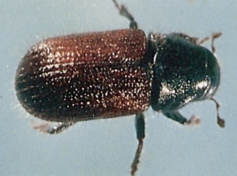