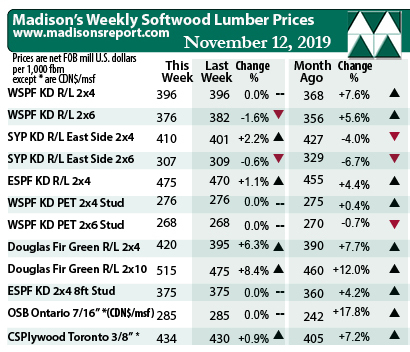 A couple of weeks ago it was panel (OSB and plywood) prices that saw spectacular rebounds; this week, Douglas fir green 2×4 prices recovered back to one-month-ago levels. A strong undercurrent of sales activity allowed U.S. sawmills to keep most of their prices flat from last week as many buyers couldn’t avoid coming back to the table repeatedly to keep their inventories from bleeding dry.

Customers were looking to other solid wood commodities besides benchmark Western Spruce-Pine-Fir KD 2×4 #2&Btr for their home building needs, thus the price of specialty construction framing dimension softwood lumber item Douglas fir green 2×4 #2&Btr surged this week +$25, or more than +6%, to U.S. $420 from U.S. $395 mfbm last week (net FOB sawmill; cash price, or “print”). Madison’s Lumber Reporter suggests that buyers are weighing the ratio of recent price increases for “the usual house construction suspects,” and decided to cast their queries wider. A sudden spurt of demand for this one item would be enough for manufacturers to be able to raise their price quotes by a healthy degree.

Remaining flat after recent climbs, the price of benchmark lumber commodity Western Spruce-Pine-Fir KD 2×4 #2&Btr stayed flat last week at U.S. $396 mfbm (net FOB sawmill; cash price, or “print”). Last week’s price is +$28, or +8%, more than it was one month ago. Compared to one year ago, when prices were at the beginning of a terrible slide, this price is up +74% or +23%.

With roughly two million board feet of green Douglas fir production taken out of the equation by the shuttering of two Oregon mills earlier this year, production simply could not keep up with demand. — Madison’s Lumber Reporter

Still on the west coast, primary and secondary suppliers of kiln-dried Douglas-fir commodities were almost unfailingly positive about their corner of the market this week. According to players, buyers were underbought and light on inventory, prices were firm and rising, and Pacific NorthWest sawmills had healthy two- to three-week order files. In Canada, kiln-dried Douglas-fir producers built judicious log decks since fibre prices there were quite high. Fewer U.S. raw logs were being exported off the west coast lately, so log supply was a non-issue.

The below table is a comparison of recent highs, in June 2018, and current Nov. 2019 benchmark dimension softwood lumber 2×4 prices compared to historical highs of 2004/05 and compared to recent lows of Sept. 2015: