Aug. 9, 2018 - Maritime Innovation Limited — J.D. Irving Limited’s (JDI) research lab in Sussex, N.B. — is one of only three places in the world that applies genetic science to grow softwood trees to sustain healthy forests and related forest products jobs. That means growing taller, straighter and more disease-resistant trees faster than they’re being harvested. The original seed sources are from local parent trees selected from forests across the region. 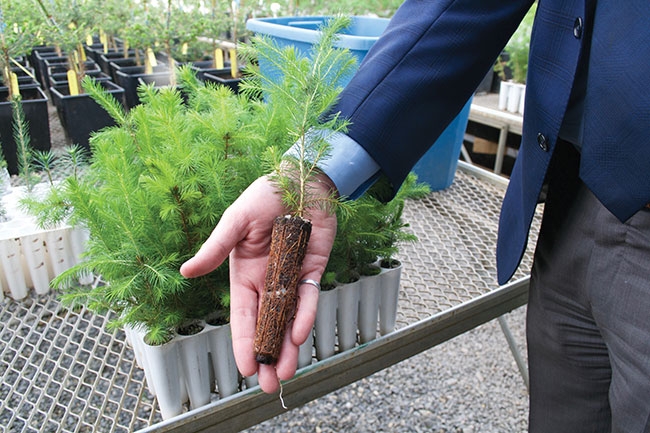 The Sussex tree lab is the only one run by JDI and is one of only two operating in North America, while the third is located in Europe.

JDI’s tree improvement program has been operating for more than 40 years and aims to get the right softwood trees growing in the right places. The company grows more than they harvest every year. Its operations span across from six million acres in northern Maine, through New Brunswick on company-owned land as well as Crown land, and into Nova Scotia. The tree improvement program is part of a full suite of progressive forest management tactics that includes both pre-commercial and commercial thinning as well as forest research and conservation.

“The tree improvement piece is about how do we get the best forest genetics to match our sites and match the forests we’re working with,” says Jason Killam, chief forester at JDI. “What type of trees, how many of each, and what’s the right mix of genetics to have out of a land base.”

“We used to say with our tree-planting that we would grow double the wood in half the time, and now we think we can do even better than that with better genetics, better tree science,” Killam says.

Better genetics means increasing the value and pest resistance, Killam explains. JDI has been planting trees since 1957 and will be planting its billionth tree this year.

Investing in the front-end by having healthier trees is allowing JDI to make long-term plans around capital investments in the mills, which is positive for surrounding communities, Killam says.

“[It’s about] making sure there is a future forest and selecting the best parent trees in the region — the strongest trees, the straightest trees, the fastest-growing trees — and then ensuring we’ve got enough of that seed to plant the trees,” says Mary Keith, vice-president of communications at JDI.

“We want to be good stewards of the land and make sure that the business and the forest is sustainable forever,” adds Andrew Willett, director of research and development at JDI.

“What we do here is grow trees that have better characteristics and better value so that we have a sustainable supply of fibre that feeds our mills, feeds our operations, feeds that whole value-chain,” says lab manager at JDI, Andrew McCartney. “That’s what the focus of this lab is, to really drive that forward, fast.”

The science
The tree breeding method is a classical breeding program.

“We select parents that have enhanced characteristics, we breed them together, we test the progeny, we measure them, we select, and we move from cycle to cycle to get better children that have the traits that we are seeking,” explains Marc Poirier, nursery operations manager at JDI.

The lab
The somatic embryogenesis room (the lab) is where the best parent trees are taken to ensure the best traits are replicated in future tree generations.

In a traditional breeding program, which produces the first generation of trees, the team at JDI must go out into the woods and select the trees they want to make a cross from.

“These are trees that are taller, straighter, they’re relatively free of disease, good branch size, angle; all the characteristics of a good quality tree that we want to cross,” McCartney explains.

Once a tree is selected, a small piece is taken from the top and brought back to the greenhouse where it is grafted onto a root stock which preserves that tree’s genetics ensuring future copies of it can be made.

“We want to make sure we’re getting those trees from well-adapted areas where we’re going to end up putting those seeds back,” McCartney says referring to climate adaptation.

Once all the best trees are collected, they are planted in a block where they can cross-pollinate.

“If you put them all together in a single block, they’re going to produce children that are better, on average, than the seeds that were being collected from wild sources,” McCartney notes.

Female flowers are placed in a bag to prevent competing pollen from getting in and when the females are receptive, a hole is placed in the bag and pollen that has been isolated from a particular male the previous year is squirted in. McCartney says this way they know every seed from inside that bag has the same set of parents.

Once a number of these crosses are made, the children are taken and tested in the field for up to 15 years before varieties are selected for propagation. Information on the children gives the team information about their parents, which the team then uses to know which parents to take for the next generation.

These trees eventually get harvested, “but the key is they’re harvested sooner, more sustainably, and as a higher value product, for whatever the outcome is, whether it’s a sawmill or pulp and paper,” McCartney says. “If we were corn breeders, we could [cross-pollinate] three times in one year. Trees, because they’re so slow-growing and it takes 16 years before they reach sexual maturity, it takes about 16–20 years per generation time… Very few companies have their own breeding efforts because it just takes so long to do it.”

The pink room
The environmental controlled growth room, also called the pink room for its bright pink light, is where the breeding program emblings are housed in containers after they’ve left the lab. JDI uses the term embling here instead of seedling to distinguish between the more valuable seeds that came from the lab and underwent the somatic embryogenesis process (embling) and seeds that germinated in the nursery (seedling).

The light, temperature and humidity are all very precisely controlled, McCartney explains. They stay in this room for about 60 days before they are moved to the nursery on-site. The pink light is impossible not to notice, but its distinct hue is very intentional.

“These are specially designed lights that emit only light that’s needed for photosynthesis. If you look really close they’re individual blue and red diodes; combined they look pink or magenta,” McCartney says.

The emblings are all at different stages of the 60-day process in their respective containers depending on when they were brought in.

“They’re still very tiny when they go to the nursery… In the nursery they take them out and plant them into little containers. It’s a delicate process,” McCartney explains.

The JDI team has a very specific grading standard to work towards which means all the emblings don’t make it to the nursery stage. McCartney says about 70 per cent make it to the next part.

The growth room has the capacity to grow up to five million emblings per year. Maritime Innovation Limited’s operational plan is to ramp up to this production level in the next two years.

director of research and development at J.D. Irving (JDI)

The greenhouses
Once the emblings reach the 60-day mark of their lives, they are transferred to the greenhouses where they are placed in new containers. This is also the stage where McCartney’s role as primary caregiver is passed on to nursery manager Mark Montville.

JDI has a larger production nursery in Juniper, N.B., which has the capacity to grow up to 25 million seedlings a year, but there are four greenhouses on-site to do the job at the Sussex location. Three of them are used to house the emblings in their growth stages before planting, while the fourth greenhouse is where the second-generation tree offspring are housed. These seedlings have been chosen as the best performing parents for the next generation.

Montville explains that a crew of people manually take the trays from the pink room and then manually remove the emblings and place them into a tray in one of the greenhouses. During these first stages at the greenhouse, the emblings are very succulent plants with very limited capabilities of sustaining themselves, he says.

“This is a high-intensity environment that we manage here, so high humidity, light, temperature, water, we manage all those things so that it’s an optimum growing environment for those emblings so that they have an opportunity to become established,” Montville says. This means starting root growth, shoot growth and developing the capability to manage the water through themselves.

The emblings remain in this first greenhouse for about four weeks before they are moved to a second greenhouse where they remain for another eight weeks. Once they are big enough, they are transported to a new container, and a third greenhouse where they will remain for four to five months. The new container is the last one the emblings will grow in before they are planted for future harvesting. This container transfer process is a manual one, but Montville says it will be automated starting next year and will be done at the Juniper nursery instead.

The target height for planting is 18 cm which provides a good balance between the shoot and root part of the plant, Montville explains.

“These guys will be planted next spring, but for the winter we’ll put them outside and store them outside on the ground and let the snow cover them to protect them,” Montville says. “Once things thaw out and the planting sites become accessible in the spring, they’ll be shipped out for planting.”

JDI’s reforestation efforts trace their roots back more than 135 years to the start of the business and it’s clear to see the passion of the people who put in the work.

“It’s nice to know that the forest that I’m helping put back and helping to maintain is the one that I’m using for recreation too,” McCartney says, beaming.
” frameborder=”0″ allowfullscreen>