Oct. 11, 2016 - Canadian Forest Industries caught up with BID Group’s executive vice-president of operations, Simon Potvin, and marketing manager Anne-Marie Levesque at the Timber Processing and Energy Expo in Portland, Ore., in September. Potvin and Levesque discussed the Canadian and U.S. markets and how the impending expiry of the soft wood lumber agreement (SLA) extension is affecting business decisions. 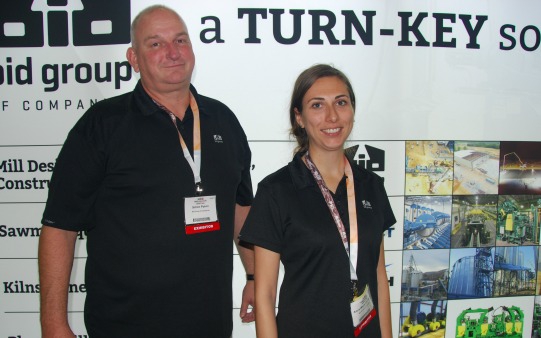 Q: With the SLA extension deadline not far away, how are the markets looking for you in the U.S. and Canada?

Potvin: We are already all over North America, and we are moving where the market brings us. In the last couple of years the market has been great in the Southern U.S., and then picking up for us in the Pacific Northwest as well. We have been putting a lot of attention in these markets.

The western Canadian market for sure has been slowing down a lot. As a company, doing capex projects for our customers, it has been a lot slower. The East has been steady for us. Not great, but the equipment there is old, most of the sawmills were built in the ’80s and ’90s and some of them are two generations out in technology. They have to invest. So we’ve been upgrading a lot of mills; Smaller projects, but a lot of them going on all the time.

As the SLA comes out, there is going to be some consolidation of the mills in the east, and these guys are going to invest again after they consolidate the mill. I’m pretty sure about that. They will have no choice.

Q: How are you growing as a company?

Levesque: As a company, one thing that we did is work on our service to have regional service offices. For example, in Western Canada investment are more limited as they’ve invested a lot in the past years, but they need to run their mills: get retrofits, upgrades. We have a big crew there to service those mills. We also have a crew here (in Oregon), and in the southern U.S. It’s very important to be close to the customers and to have a quick response.

Potvin: If we go back two years, we had probably seven or eight people working full time in service, and the rest of the people were from operations. We were more in a position where we were hoping the phone would not ring, being so busy. Today we have 45 people, full time in the service business. We created a service business: BID Group Service. It’s not a new company, but it’s a new division. Instead of having little initiatives here and there, now we have leadership and a team all over North America. Fifteen to 20 per cent of our business comes from service.

Q: What can we look forward to from BID Group?

Levesque: We have the Biewer Lumber project in Mississippi that is being built, which will start in November. We have a big crew there working on it.

Potvin: We just got an order for another one in Demopolis, Ala., and it’s going to be close to the same size mill, turn key as well. It’s a little different of a project because the customer already owns the building and the land there so we have a little less work to do on the infrastructure side of it, but it’s the same scope of supply for equipment. That is going to be starting this time next year. The turn-key approach for us is the key to our success for sure.

Q: Why did you decide to move into turn-key operations?

Potvin: Just because of customer need. We were sitting in front of customers who were trying to do projects and they’re being told by consultants it’s going to cost $50 million to do that and it’s going to take two years. Since we control everything we do – we control from the concrete work all the way to the start-up and services of the equipment – we can execute these projects within 12 to 14 months, and we supply everything. We are basically doing it at 75 per cent of the cost.

We’re completing a turn-key job in Quebec, Produits Forestiers DG, a big merchandizing job. We’re completing as well in Western Canada a smaller job at Polar Sawmill from Canfor in Bear Lake. That is a job where we installed a bit of someone else’s equipment and some of our equipment. We were more an integrator in that case. The one in Quebec is a complete job.

When you get a PO that’s giving you six months of work for your people, it makes you smile.

Q: What’s your outlook on the industry as a whole?

Levesque: It’s showing that the market is healthy and that there are good years coming or they would not invest like that so it’s good to see. The economy is recovering and the housing is slowly increasing, but still under what they were expecting.

Potvin: The price of lumber is solid, and if you’re in south U.S., you’re on the other side of the SLA so you feel a little more positive. Fortunately we are on both sides. In Canada, it’s not dead; it’s just a little slow and no big projects. It’s upgrades; it’s additions to mills and new technology – not large investments.