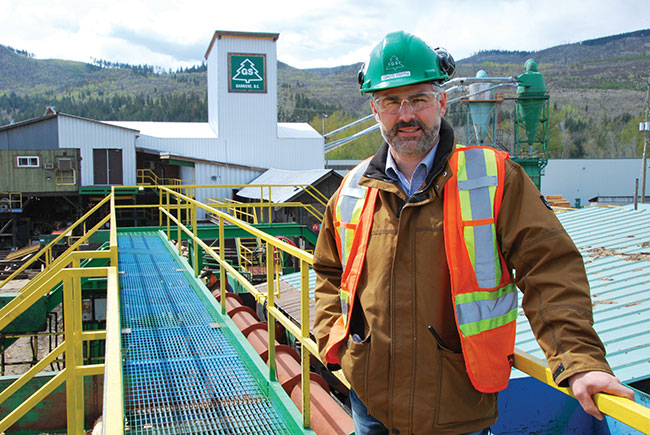 Take, for example, the last day on the job for 30-year Gilbert Smith employee Debbie Fennell, which coincided with CFI’s visit to the mill site in Barriere, a 45-minute drive north of Kamloops, in late April. There was an office lunch, cake, old pictures, and plenty of reminiscing among the staff as they wished their colleague the best in her retirement.

So, you can bet it was a pretty big deal when the sawmill celebrated 50 years of lumber manufacturing last year. I’m told the mill’s covered outdoor parts room doubles as the staff BBQ and party area.

It’s clear the people are the lifeblood of the cedar mill. It’s not surprising when third-generation mill president Greg Smith tells me that employees are part of the family. There are many different generations working at the mill and you can find father-son, father-daughter, grandpa-grandson, cousins, and husband-wife pairs within the departments.

When Gilbert Smith launched into a multi-year multi-million-dollar upgrade to modernize its manufacturing process in 2016, it was important employees were on board for the learning curve, Smith says.

“It’s been an evolution. We put a very large capital project together with lots of new technology, lots of moving parts, but operational and maintenance systems were not developed enough to achieve the initial performance levels we were looking for,” he says.

Since those new machines went in, the Gilbert Smith team has been implementing solutions to build up staff knowledge of the new technology as well as improve the processes necessary to achieve the full potential of the upgrade. 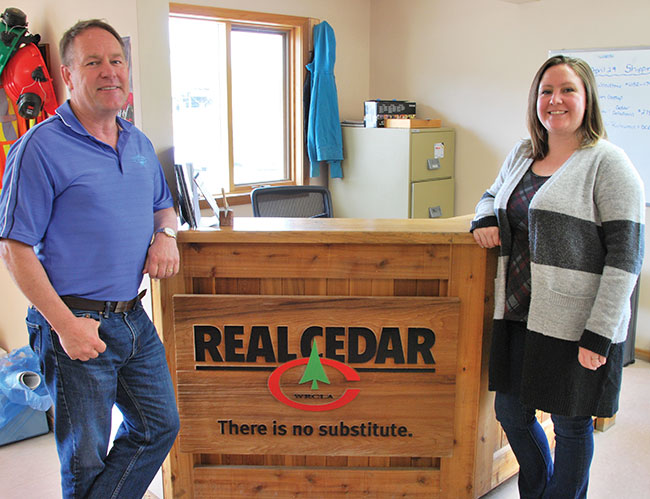 Maintenance is a crucial spoke in the wheel. Last year the mill retired its old maintenance building – fondly known as “The Shack” – and built a new maintenance shop from a portion of the building that once housed the mill’s first bin sorter.

“It’s two-levels, so it contains maintenance offices, electrical, and mechanical – all personnel together. That was the big project last year. We cleaned out 50 years of obsolescent clutter,” Smith says.

Less capital intensive, but no less essential, were administrative upgrades, including a computerized maintenance management system that interfaces with the mill’s accounting system to keep track of parts inventory and preventative maintenance scheduling.

“The parts inventory is critical,” plant manager Kathy Cooper says. “Before, when a piece of equipment went down, somebody offsite may have been the only one that knew where the part was – hanging on the backdoor in the MCC room or something. Now we have the parts inventory mapped out by location and criticality. It is an ongoing process.”

The majority of parts are kept organized in the lower level of the new maintenance building. The inventory process includes scanning barcodes to track each part electronically.

“We are seeing the results of having a good system in place, especially when it comes to identifying critical parts,” Cooper says. The system is still only as good as the information in it, so an additional maintenance improvement was the creation of the maintenance co-ordinator position, held by Kate Schilling.

Linking the production and maintenance departments is a dashboard that shows performance in real-time. “We’re just getting into that process. We have our production numbers hitting the right targets, but now it’s about understanding the uptime availability and utilization to increase the consistency over the entire month,” Smith says.

The mill produces more than 100 products, which includes a proprietary high-line blank for remanufacturing, as well as timbers and one-inch boards. Annual production is around 40 mmbf.

The sales department is constantly communicating and providing feedback on marketplace pressures and opportunities, which allows the mill to stock the right logs and produce the highest-value products.

“We’re a smaller operation so we can follow the ebbs and flows of the marketplace so we can find that niche,” sales manager Mike Mitten says. “We found 2x4s were posing a challenge, so we took a portion of those logs originally designated for 2x4s and started using them to produce a different higher-value product. We are ahead of the curve on that.”

This past winter the mill installed a used sorting deck for its small log line, with a Linden log ladder to allow for an additional log sort, as well as the ability to send logs back to the large log line, or kick out to a log bin.

About 60 per cent of the log volume goes through the mill’s HewSaw R200 small-log line with a recently upgraded optimization system from MPM Engineering.

In 2013, the mill installed a Corely Manufacturing slabber and carriage and a Kockums headrig that can cut up to 42-inch diameters. The install included Lewis controls optimization and 3D wood scanners from LMI Technologies. The carriage system was purchased used from a shuttered Pope & Talbot mill. “We switched from a circular saw to a bandmill and we’ve been continuingly improving recovery and production since,” Smith says.

All rough-cut lumber from the small and large log lines merge together and are conveyed across into the grade sort line in one large conveyor system. IFM cameras monitor the conveyor to ensure smooth transfer of the lumber.

The grade sort line addition in 2017 resulted in a beautiful new building to tour and enables, in one pass, lumber to be cut, graded, sorted, packaged and put on the truck in the same day, Smith says.

Key used equipment includes a Newnes trimmer, Comact stacker, and a Samuel Packaging press. Piché was involved in the supply of new components, including the star wheel and cut in two systems. Mill Tech provided a wrap-around system that allows for lumber from the Stetson Ross 610 planer and Weinig BKW Twin Resaw to flow seamlessly into the grade sort line. Raptor Integration supplied the optimization and control for the entire system.

Rapid technological advancements have led to an entirely new set of skills in mill employees. While the tech learning curve can be challenging for some, automation has reduced the number of physical tasks mill staff do, which creates an even safer environment for employees.

“We’re really looking for people who can advance in a number of different roles. People who want to learn the technology and help bring it to its full potential,” Smith says.

A key character trait Smith looks for in new staff is a curiosity to link everyday tasks with the bigger picture of the mill’s performance.

“We’re all guilty of sticking with what is comfortable. You can get boxed into that and then you plateau. But if you have a curious mind, you’re always asking and questioning, how can you make that better? How can you think outside of that box? You have to have people wanting to problem solve and figure that out,” he says. 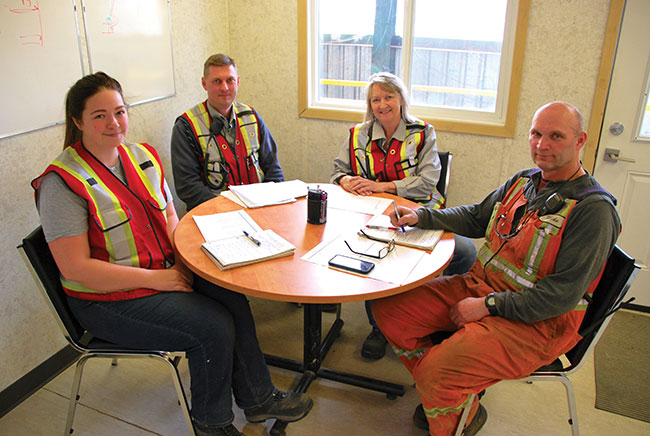 Once you have the right people in place, keeping them there includes ensuring the mill environment is safe, and that requires buy-in from all team members. “We’ve come a long way from when I started in ’81. There’s a lot more to it now and we have a good safety record here,” Cooper says.

“When you’re in this team environment, you want to have people looking out for each other and respect the process, and that means ensuring a culture that focuses on safety,” Smith says.

One way they have done that is by holding consistent and topic-driven weekly safety meetings focused on leading indicators. The mill’s safety co-ordinator, Darcey Woods, recently received her Canadian Registered Safety Professional Designation, and has helped the operation in all aspects of safety performance.

Gilbert Smith Forest Products as a company dates back to 1955 when Smith’s grandfather, Gilbert Smith, and his two sons, Ted and Carman, opened a cedar pole business. In the late 1960s the company bought sawmill equipment and opened the mill.

“Continuous innovation and remaining flexible has allowed our business to grow over the past 60 years of business. Our key to success is to avoid competing products and processes and to focus on our core business,” Smith says.

Over the last 10 years, the company has grown significantly and developed a niche of green products for remanufacturers. The company tailors its programs to compliment customers’ needs.

“There’s a lot going on in the global market right now that is making this current downturn challenging. But we feel like we are in a good place. We have great employees, a sustainable business and, as a small company, we’re pretty nimble,” he says.