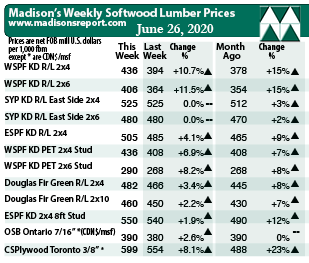 The big surge in plywood prices of two weeks ago “Plywood Prices’ Major Surge While Most Softwood Lumber Prices Moderate”, was followed last week by a spike in most softwood lumber commodity prices.

As Madison’s detailed in that post last week, “A spike in demand, whether for immediate repair needs or longer-term rebuilding, for Plywood and Oriented Strand Board (OSB) always causes a surge in price.” Sure enough, this week the price of Western Spruce-Pine-Fir KD 2×4 #2&Btr rose significantly. In the Western region in particular standard wood building materials prices are up +10 per cent.

Supply of Western S-P-F lumber and studs remained way behind the strong demand of last week, according to traders in the United States. Producers extended their sawmill order files into the latter half of July as buyers scrambled to secure increasingly sparse volume from sources. Even secondary suppliers were running out of wood available for quick shipment, as their inventories were cleaned out by unceasing demand.

Demand from lumber-consuming markets in Canada went nuts last week. Western Canadian sawmills could only try to keep supply in step with the needs of relentless buyers. Sales were so intense from Canadian buyers that one large Western S-P-F producer got cleaned out of available wood before even entertaining US markets for two days in a row. 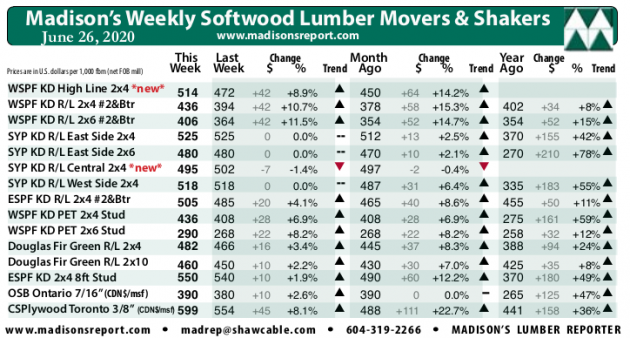 In the East, wholesalers and distributors of Eastern S-P-F commodities had trouble finding solid pricing for any items as levels varied wildly from supplier to supplier. Producers gave the impression that there was no wood available but persistent vendors were able to find what they needed if they called back enough times. Still, any product put on the market by sawmills was spoken for almost immediately, and order files were anywhere from a couple weeks to mid-August depending on the source. The bulk of business was done through the distribution network where secondary suppliers sold below print (IE: Madison’s), above print, and just generally all over the place.

“According to stocking wholesalers on the Eastern seaboard, Fir plywood prices skyrocketed into the stratosphere and most vendors refused to commit to dizzying replacement levels for wood that wouldn’t arrive until August at the earliest. Some desperate wholesaler yards bit the bullet and bought anyway, hoping the wood will hold its value. ” — Madison’s Lumber Reporter

The below table is a comparison of recent highs, in June 2018, and current June 2020 benchmark dimension softwood lumber 2×4 prices compared to historical highs of 2004/05 and compared to recent lows of Sept. 2015: