How do you measure the quality of the work you do as a company? For the team at Duz Cho Logging, they need look no further than the fact that six forest products companies in the region look to them to provide fibre for their operation. 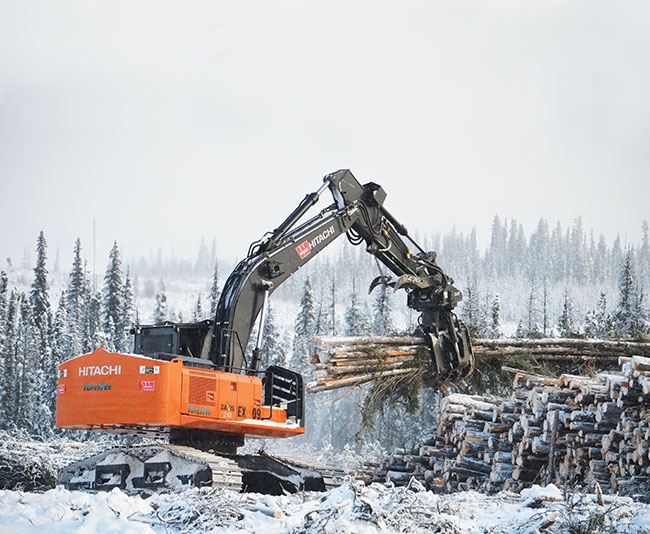 Growing demand for fibre and the need to remove MPB wood has helped Duz Cho expand their operations since the recession. How do you measure the quality of the work you do as a company?

“We have evergreen contracts with the licensees here as a contractor,” says Al Humphreys, CEO for the Duz Cho Group of Companies.

Those contracts represent an annual cut of 800,000 to one million cubic metres. A staff of about 110 are involved in  the company’s logging, sawmill and pulp chip operations, in addition to 50 to 60 subcontractors. Of the 110 staff, approximately 10 per cent are members of the McLeod Lake Indian Band, which is the owner of the Duz Cho operation.

Established in 1988 with a modest cut of 60,000 cubic metres, the company has flourished despite the severe impact of the recession just a few years ago.

“We did end up having to downsize, but we still did a little bit of logging,” explains Robert MacCarthy, general manager of Duz Cho Logging.

Thankfully, the company was able to land some work logging pulpwood for the mills. With the sawmills down, only minimal contracts came their way for sawlogs. But combined with the demand for pulpwood, Duz Cho was able to weather the storm and, ultimately, welcome many of their skilled loggers back into the fold.

Now the company is flourishing in the vast woodland surrounding Mackenzie. Working with a 200km2 radius of Mackenzie, most of which extends to the northern boundary of that range, the Duz Cho logging teams are progressing through the vast forests of mountain pine beetle-affected wood. As a result, the crews are currently logging an annual wood diet of approximately 70 per cent pine and 30 per cent spruce, trying to rid the forests of as much beetle wood as they can, before it can no longer be harvested for use.

During my visit, I met the Duz Cho team in the forests southwest of Mackenzie, just off the road to Fort St. James near the recent Mount Milligan copper-gold mining development. The harvesting site featured an operator ripping through MPB stems with a Tigercat 845C mounted with a Tigercat 5702 felling saw. A second operator in the area was running an 870C, also fitted with a 5702. The thin stems were allowing the operator to collect an average of six to eight stems at a time, stacking the trees for processing. The processing portion of the Duz Cho operation is subcontracted to a local company, who uses primarily a combination of Hitachi forestry machines with Waratah heads.

A few hundred metres away, two skidding crews were working away, clearing the wood to the roadway to be stacked for the logging trucks. A pair of John Deere skidders, including a 748H, worked in tandem to bring the logs to a Hitachi Zaxis 210 Forester before they are loaded onto the trucks destined for one of the several customers in the region.

The thriving business in the woods, driven by growing demand for fibre and the need to extract as much usable MPB wood as possible, has stabilized the operation just a few years after staring in the face of the recession. That stability is now starting to be reflected in Duz Cho’s staffing as well, where a new community initiative is already paying off for the company.

Growing demand for fibre and the need to remove MPB wood has helped Duz Cho expand their operations since the recession.

Growing the workforce
Duz Cho looked for a way to provide work opportunities for the Mackenzie community, while also trying to provide a source of qualified personnel for its operation. That effort has translated into offering a heavy equipment operator course in conjunction with the Mackenzie campus of the College of New Caledonia.

“The purpose is to help the community to train people so that they can be in the workforce around Mackenzie,” MacCarthy says. “We see that there is going to be a shortage of skilled workers in the future and we wanted to be able to help.”

The first round of the course attracted only a handful of people, but it paid off for those involved. Duz Cho hired two of the students as operators and they have been very good workers, according to MacCarthy. The course doubled in size for its second offering.

Both courses featured a mix of adults looking to retrain for a second career and young people looking for a first career in heavy equipment operation. The majority of the students have been under the age of 30.

The course has helped to attract young workers to the industry, creating the potential next generation of the Duz Cho workforce.

“We have been able to find younger workers that are willing to learn for some of our operations,” MacCarthy says.

He points out that, on the chipping side of the Duz Cho operation, young workers have been brought in and trained on the equipment, and are learning and performing well as a result. That success has branched out into other equipment operation, like wheel loaders, as well as grounds crew.

But despite the success with attracting entry-level workers, there is still difficulty attracting, and sustaining, young skilled workers.

“To find young skilled workers is getting harder and harder in the logging industry,” MacCarthy says. “Young people are drawn to Alberta’s oil and gas industry for bigger dollars versus the logging industry, which provides a steady workflow. It’s tougher to get young kids to come that way.”

“It makes me nervous,” MacCarthy says. “We put some time and effort into them and then, when oil and gas picks up, our gut feeling is that they might leave because the big dollars entice people.”

Perhaps the bright future that seemingly lies ahead for the Canadian forest industry will be enough to convince those same young workers to stay. With diversified global markets, the steady emergence of the domestic bioeconomy and a strong core of forest product manufacturers situated throughout the Mackenzie region, the forest products industry is poised for sustainable employment opportunities for years to come.

In the meantime, Duz Cho continues to be relied upon as the premier logging contractor in the region, continuing its work to develop a strong operation in the community, with the community and for the community.