June 5, 2013, Sweden – “This is the biggest technological advance for forwarders since ÖSA launched hydrostatic transmission in 1976,” Tommy Andersson.

Tommy Andersson of Ecolog doesn’t hold back the praise when he talks about the company’s new forwarder, the EcoLog ELGP.

The new machine appeared like a bombshell at the international forestry fair Elmia Wood in Jönköping, Sweden. Only a handful of people knew of the machine’s existence before it was unveiled as a prototype at the fair.

The ELGP is the brainchild of one of Sweden’s most prominent engineering designers, Lars Lameksson, with his company LL Skogsmaskiner. He was one of the important figures behind the development of today’s CTL (cut-to-length) machines. His best-known creation is the harvester with pendulum arms, which is still in production at EcoLog.

“Many of the ELGP’s features are based on Lars Lameksson’s ideas about how a modern forwarder should be built,” explains Tommy Andersson, co-ordinator of the ELGP project and a former forwarder operator himself.

The major new innovation is perfect weight distribution both with and without a load. The result is considerably reduced ground pressure, as reflected in the machine’s name ELGP (Eco Log Low Ground Pressure).

The forwarder can load up to 20 tonnes. With a 14-tonne load, the machine has a ground pressure that is fully 50 per cent less than that of a conventional forwarder. With a full load, the pressure is 20 per cent less.

This difference is because the machine breaks away from the traditional concept of a tractor plus an attached trailer. At the front of the ELGP are the cab and the crane. At the very back are the engine and hydraulic pumps. The forwarder has two load carriers. The rear one can be moved lengthwise 1.1 metres so that the load will be over the wheel unit and the machine will have perfect weight distribution.

One disadvantage is that with two load carriers and double articulation, the forwarder is longer than normal. It is 13.4 metres long and 2.86 metres wide. However, the double articulation means that the ELGP can swing 25 degrees in each direction, a total of 50 degrees, resulting in excellent accessibility.

The innovative thinking has also found its way into the cab. It can be raised by 1.1 metres, giving the operator good visibility during loading and unloading. The cab has hydraulic suspension and can be tilted by 15 degrees in three directions plus 5 degrees backward towards the crane.

EcoLog has long used Lars Lameksson’s pendulum arms on its harvesters. This time-tested construction allows a harvester to remain balanced on uneven ground and thereby give more power to the crane. The same advantage should be given to forwarders, and given that LL Skogsmaskiner built the ELGP prototype, the question is whether pendulum arms are the next logical step.

“We’re considering several alternatives,” Tommy Andersson answers mysteriously. “A lot will happen before we start delivering the forwarders in one and a half years from now.”

The main advantage of the ELGP is that it can handle a bigger load with lower ground pressure, which reduces the distances travelled and thereby also the fuel consumption. 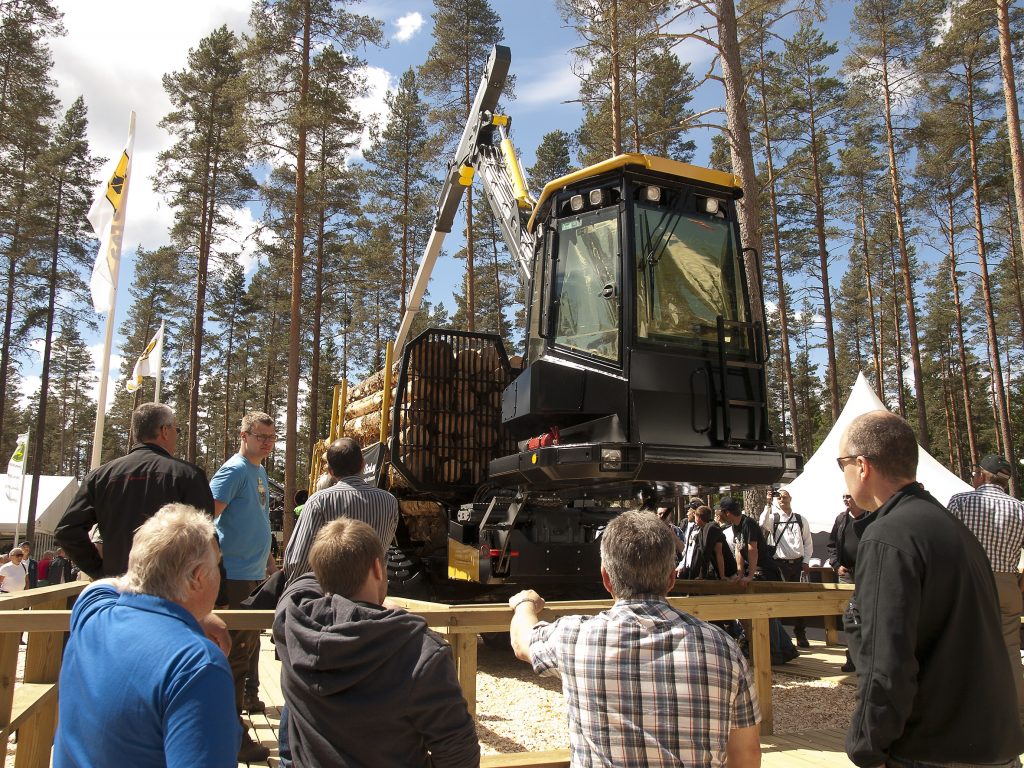