Walking through the aisles at the Portland Expo centre, I found that much of the equipment on display was plastered with sold signs, with delivery to destinations in the Pacific northwest following the end of the three-day equipment and technology showcase.

It was a clear indication that stabilizing lumber markets in Canada, the U.S. and overseas are creating a culture for new investment in mill efficiency. Sawmills are replacing outdated equipment, investing in new computerized technology, introducing optimization equipment or improving the quality of the tools used to maintain phases of mill operation.

Some of the larger manufacturers of sawmilling equipment like Comact, USNR and VAB spoke about new installations happening at sawmills throughout western Canada. That positivity extended throughout the gambit of parts, equipment and technology suppliers. Companies like Gilbert, SonicAire, Carbotech and Brunette are also quick to discuss new projects in the works in the Canadian market.

Here is our look at some of the news overheard on the show floor in Portland.

USNR boasts large lineup
USNR had the largest product showcase at the show. They had several machines scattered throughout the booth, with product experts available for each one. One of the exciting bits of news passed along to us was the success of the company’s multi-track fence, which has sold approximately 75 units over the past three years.

Gilbert excited about backlog
Gilbert can’t build machines fast enough right now. Speaking to one of the company’s sales reps at the show, Gilbert currently has seven planer orders it is working to fulfill, and that was before the orders that were potentially going to be taken at the show.

Autolog adds sap analysis
Autolog has a new drying optimizer that sorts spruce and fir by species and moisture content. An alcohol-based chemical agent is sprayed on the end of the lumber before it passes through a system that analyzes the colour of the chemical reaction to determine whether the board requires a longer drying time (fir) or shorter drying time (spruce and pine).

Microtec looks north
The team from Microtec Springer is excited about the possibility of expanding their presence in the North American market, including having their first units sold in Canada. Their CT scanning software, which allows operators to see the quality of the log before making the cut (grading the lumber before it is sawn), has seen five installations to this point, two of which are in the United States.

Simonds sees sawfiler shortage
The team at Simonds was actively discussing the sawfiler shortage that is hurting the sawmill industry in B.C.  As an active supplier of equipment for the filing room, they are seeing the potential crisis unfold, as it is speculated that the average age of filers in the province is around 60 years old. Simonds is hoping that college programs within the province, the stabilization of the industry and the promotion of new innovations will help attract young people into the industry.

Moehringer goes west
Moehringer was among a handful of German companies exhibiting at the show, looking to either create or expand its presence in the North American market. The manufacturer of chipper canter lines, log bandsaws, rip saws, sorting and stacking lines said that part of their new focus is Canada, where they believe their products are a good fit for the mill. Expect to see them make an active move to establish their presence here in the months to come.

Telco sees the light
Telco recently released a new analog measuring light curtain to the market. The Danish company originally released the product in Europe just a few months ago, and it will be released to the North American market in the coming months.

SAW+ADD sensor system
A sensor system invented by Warren Myrfield of SAW+ADD is helping to minimize deviation in the band saw or resaw. Using a sensor in the bottom guide to measure force, the system is intuitive in its ability to react to high force conditions. As a result, the sensor has helped to reduce target size by 1/32”, and significantly increases the accuracy of the cut. The first Canadian installation is currently underway in B.C.

Visit woodbusiness.ca for our special digital edition wrap-up of the Timber Processing and Energy Expo, including exclusive information on markets, industry news, new products and video discussions with industry leaders from the show floor. 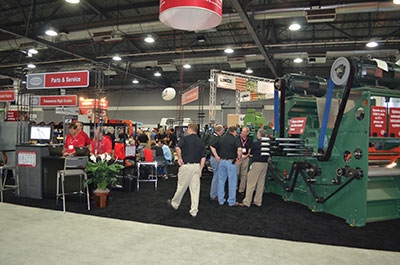