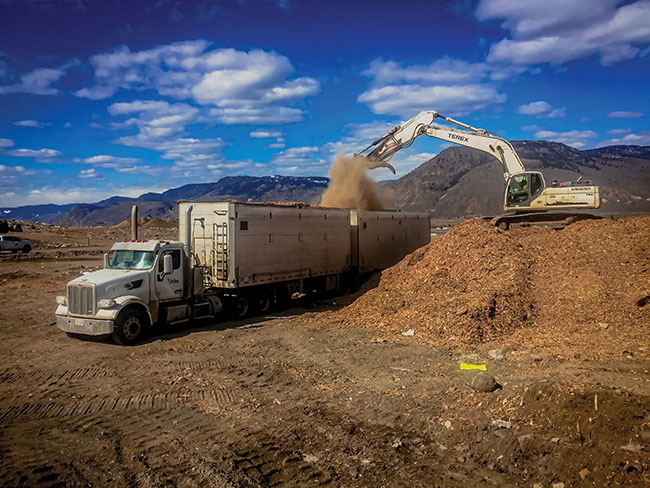 In 2019, during the height of the forest industry’s downturn, many sawmills were permanently shut down and logging contractors were faced with a dilemma: move their logging fleet to a different location, or sell their equipment and lay off people? For Merritt, B.C.-based Valley Carriers Ltd., the answer was a mix of both.

The company, which does contract trucking for various pellet plants, sawmills, power plants and pulp mills, sold off some of their equipment and trucks and began to focus more on their grinding operations. This transition was in line with the company’s mission, says Valley Carriers CEO Ben Klassen.

The family-owned and operated business, which employs approximately 100 people, was started by Klassen’s grandfather in 1963. It “has always been a business based on wood residuals, sawdust and any kind of waste products from the mills,” Klassen says. “We always had that value-added piece of, ‘What can we do with this fibre to turn it into a product that people can use?’”

So, when the Forest Enhancement Society of BC (FESBC) put out a call for proposals in the fall of 2020, Klassen saw an opportunity to bring economic and environmental benefits to the community. He applied for funding for a project that would use a forest slash bundler to recover residual forest fibre – which would normally be burned in slash piles – to be used for electricity by a local power producer, Merritt Green Energy. FESBC approved a grant of $416,029 to Valley Carriers for this project, which began in December 2020.

“Valley Carriers already had FESBC funding from our earlier call for proposals, so they had demonstrated good performance, and they were quick to provide us with a new and additive proposal that increased the amount of work they could do,” Dave Conly, FESBC operations manager, says when asked about FESBC’s motivation for awarding this grant.

Valley Carriers’ initial proposal called for using a slash bundler to bundle logging slash so it could be transported using conventional logging trucks.

The idea was to “make this tube, essentially, of slash, wrapped in twine, and then we would be able to haul it out a little bit easier at the time of logging,” Klassen explains. “But, that never really took off. We ran it for two months, but it proved too inefficient.”

This was because the cut blocks Valley Carriers planned to take residual fibre from had less fibre piled on the roadside than originally anticipated. The primary logger had used more of the fibre than expected, Conly says.

As a result, there was less volume to haul, with a further distance to travel, and fewer suitable logs to support the bundles.

“Ultimately, this created production issues and the bundler was only able to produce about one-third of what a traditional grinder is able to do,” Conly explains.

Pivoting to grinding
To overcome this problem, Valley Carriers pivoted to traditional horizontal grinding, partnering with Huska Holdings to use three CBI grinders – two 6800s and one 6400.

“Grinders are temperamental machines. Most of the time, it’s a pretty violent process that they go through, so they tend to breakdown, but these seem to be pretty consistent,” Klassen says.

The partnership with Huska Holdings was a natural one, he adds, noting that Valley Carriers has the trucks and the contracts, and Huska Holdings has the capacity to grind a large amount of volume.

Initially, Valley Carriers ground the residuals directly into their chip trucks, but using these chip trucks on steep logging roads proved to be a challenge.

“It’s a pretty daunting task for a driver to drag a 53-foot tail around these switchbacks that were made for logging trucks,” Klassen explains.

So, the company sold off some of their logging trucks to purchase three new walking-floor B-trains from Titan Trailers, through their long-term dealer Delta, B.C.-based Ocean Trailers, to haul the residual fibre.

“It has a better ground clearance and the hog doesn’t freeze in the winter. You get more volume on the walking floor on flow-through trailers, and their unloading capabilities are pretty quick,” Klassen explains when asked about the benefits of the walking floor B-trains.

Valley Carriers worked with Titan Trailers to make some changes to their flow-through B-train, such as adding a hydraulic fifth-wheel plate so the trailers can slide together without needing traction. This means that, if operators are unloading the trucks in the winter, the hydraulics hold the trailers together, rather than the traditional method “where you try to lock your brakes, then undo an air lock and try to use your truck’s dry tires to slide the two trailers together,” Klassen says.

Overall, transitioning from slash bundling to horizontal grinding was the right move, and FESBC’s funding made it possible for Valley Carriers to extend their grinding operations, keeping 10 people employed for the project. Employment included the operation of the grinders, a log loader, four Western Star 53-foot trucks with a mix of Titan and TyCrop walking floors, a John Deere D7 grader, and a John Deere 7000 dozer for road building.

The project also involved a large amount of road maintenance, for which the company uses a Kobelco 195 excavator with a six-way dozer blade.

“There’s a fair amount of prep that’s involved, especially in our area, down here in the southern Interior – everything just goes up, so it takes a bit of effort to get those units in,” Klassen says.

Impact of grinding
But the benefits of this project made the effort worth it. For one thing, grinding wood waste rather than burning it in slash piles provides environmental and public health benefits.

“By not burning these piles, we are avoiding emissions that are harmful to the atmosphere,” Conly explains. “In addition, in areas close to communities, smoke is avoided when the fibre can be utilized. Delivering this wood to a green energy plant produces clean electricity for public use and distribution. This means less small particulate in our air that we breathe.”

By March 31, Valley Carriers had met its commitment to FESBC, which was to provide Merritt Green Energy with enough fibre for 37 days of run time.

“We overachieved on our contracted commitments at a time when, 18 months ago, the power plant in Merritt was running at 70 per cent capacity because they didn’t have enough fibre,” Klassen says. “This year, they have not been down due to a lack of fibre. So, that I would say is a success.

“For us in particular, to have our people employed and our equipment continuing to move, it just tells us that it may take volume to keep our business strong. It’s not the biggest part of our business, but adding that capacity of four or five trucks and diversified revenue stream keeps us being able to hold a fibre basket for the small mills that we service,” he adds.

Valley Carriers plans to execute similar grinding projects this spring on private land. The company has only used approximately half of the FESBC funding, so they have lined up some cut blocks where they can grind residual fibre in August and September using the remaining funds. Klassen expects the FESBC grant to generate $1.75 million in revenue overall.

“We’re hoping to see FESBC get re-funded, and if it does, this is something we can continue for the next four to five years,” he says. “There’s fibre around and available that’s getting under-utilized, being burned, so it would be nice to see that opportunity come again.”

According to Conly, FESBC is planning to support similar projects to help forestry companies find new ways to utilize fibre and avoid burning wood waste in the forest.

“We have encouraged the industry transformation to be more focused on bioenergy opportunities,” he says. “Contractors have been able to adjust their programs, their capital and their workflow.”

Both Klassen and Conly believe grinding wood waste is a good way for loggers to overcome the effects of B.C.’s decreasing fibre supply, but acknowledge that the economics are very tight.

“The economics of bush grinding are hard just because it’s an expensive process. The end users – the pellet mills and power plants – their business models usually don’t support that fibre. So, that’s where FESBC comes in and tries to bridge that gap. The end users can’t afford it at $55 per tonne, but they can afford it at $45, so FESBC funds our operations so that we’re able to keep our production prices attainable for the end users,” Klassen says.

“It’s definitely been a struggle, and some people say we shouldn’t be doing it, but it’s still employment, it’s still value, it turns into power,” he adds. “I can’t see a downside to it.”